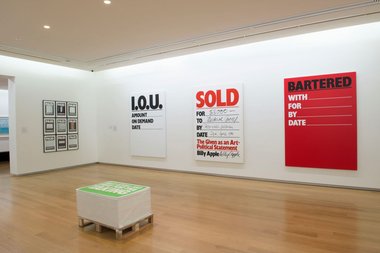 Curiously this same vulnerable naivety is also a blessing that eventually led him towards his greatest achievement: his art Transactions. Apple, with the help I assume of significantly articulate allies like Wystan Curnow, persuaded Peter Webb in Auckland (in 1981) to do what Leo Castelli in New York didn't even dare consider: exhibit a suite of Sold paintings and prints that baldly set out the fiscal details and social politics of their own purchase.

Okay, let’s say at the beginning what needs to be said. That this is a show that with Billy Apple‘s Pop and Conceptual pedigree and influence should be the most important exhibition in New Zealand for twenty-seven years. Its historical significance matches that of Auckland City Art Gallery’s COLIN McCAHON: Gates and Journeys (1988), a focussed survey that with a quality catalogue easily eclipsed the later more sprawling McCahon retrospective, A Question of Faith (2002). If the host institution acknowledges this claim, and the profound cultural importance of Billy Apple’s life work, then it should have contributed more space (another floor) so that certain - what might be regarded as key - Apple works, such as the Severe Tropical Storm Irma 9301 installation (2002), Body Activities (1971), and Inhouse design projects (2012) could be included - if their selection was deemed desirable.

I’m being very opinionated here, abrupt and aggressively to the point, and the curator is likely to vehemently disagree with my assessment of essential works and the exhibition space required. The problem is obvious and I’m sympathetic; the artist is eighty now and time is running out. It is extremely hard to negotiate exhibition agreements with institutions, especially if one of your working captions, The Given as an Art Political Statement, openly zeros in on negotiation as a political activity. Nevertheless I still want to argue that without the ingredients I’ve mentioned, Billy Apple’s practice is presented as duller than what it in fact is. This is clearly a very good, beautifully organised, enriching exhibition - that is an obviously accurate and fair description - but it could have been a sublimely great presentation. It could have been utterly extraordinary. It is not that.

The three sets of omitted work I mention are profoundly bodily - and to some extent anarchistic - in the way they make things very difficult for any municipal institution. The first involves loud, dissonant codified sound that with a trajectory of small lights on a tarpaulin takes up a lot of floor space; the second effortlessly threatens the well being of the average germ-conscious gallery visitor; and the third proposes unpredictable, possibly dangerous movement in the gallery’s corridors with an enthusiastic availability of Apple® push bikes and skateboards, vehicles with painted port and starboard colours. Despite these difficulties, any committed institution - with savvy and flexibility - could cope.

Perhaps I’m racing along too rapidly here, and am - for example - too keen for less reliance on portable (and static) wall works. One of the problems is that while Billy Apple may have succeeded in fleeing from his earlier (pre-1962) identity as Barrie Bates, in his obsession with branding, Billy Apple, Billy Apple ®, Billy Apple © or Billy Apple TM have become ossified. He (the marketable core artwork and ‘Self’) in this show - not the earlier Artspace one - has given up trying to escape from his ‘own’ personality or branding persona (if they are separable), despite bountiful examples all around the gallery of his many collaborations.

I’m talking about character traits, not physical appearance. Apple’s five part Self-Elimination Portrait, 26 Nov. 1970, a sequence that shows him gradually obliterating his facial features from a photograph taken seven years earlier, doesn’t tell us anything about personality because in this show Apple as visible brand and idea is reified. Not only must they be constant - to succeed as effective marketing - but there is a sense that Apple, the guy behind all these identity and promotional layers, couldn’t mentally change even if he wanted to.

The work in the gallery atrium demonstrates this. It displays his interest in collecting (not driving or riding) racing cars and racing motorcycles, and illustrates a personal enthusiasm for motorsports he has had since he was young. The five machines are not actual artworks except when they (via riders he has arrangements with) are participating in races, when they become (with attached logos) a sort of surrogate - and active - motorised ‘Apple body’. As a branding exercise, that makes sense. Yet they look indulgent when lined up in a row to match five related paintings on an adjacent wall and to support a massive diagram and text that proposes an outdoor aural performance. This is because they openly undermine the ethos of the exhibition as stated in the show’s title: the artist has to live like everybody else. What starts off as a vocational observation leads to an aspiration that becomes delusionary, for since when can ‘everybody else’ have a life style that enables the collecting of racing cars and racing motorbikes? The titular sentence becomes laughable. It is incredibly naive.

Curiously this same naivety - which calamitously led to Apple having a breakdown after British health authorities ordered the removal of his Body Activities from his 1974 Serpentine survey - is also a blessing that eventually led him resolutely towards (in my view) his greatest achievement: his art Transactions. Apple, with the help I assume of significantly articulate allies like Wystan Curnow, persuaded Peter Webb in Auckland (in 1981) to do what Leo Castelli in New York didn’t even dare consider: exhibit a suite of Sold paintings and prints that baldly set out the fiscal details and social politics of their own purchase. These then led to a number of related painting series such as Bartered, Paid, NFS, IOU, POA, Half Price and Complimentary.

In the exhibition, the IOU and Bartered paintings are not filled in with specific details of any transaction, and that is a disappointing compromise. The Sold work is however, a record of a particular payment, a receipt transmuted into a gorgeous looking canvas. It is not an ordinary paper docket - an item of stationery - but a profoundly aesthetic object, for Apple’s method goes beyond mere idea; he insists the work looks stunning too. Yet it is interesting that Apple - for all his Royal College of Art training - didn’t come up with an equivalent ‘cosmeticised’ version for his much earlier Body Activities, to visually aestheticise somehow his semen stained, snot and shit-smeared tissues. I’m sure it would have been easy for him as a conspicuously brilliant designer to do so, but he let the body traces, secretions from himself as a generative artwork, remain in a rudimentary state of presentation.

The other aspect is social pressure. Apple succeeded in prodding Peter Webb into selling the whole Art For Sale show before it opened; an achievement quite extraordinary for both men, and a sign of real commitment on Webb’s part - for the prices at the time were high. Yet for this current Auckland Art Gallery show there are disappointing inconsistencies that showcase the profundity of The Given as an Art Political Statement, a phrase that Apple and Curnow worked out together. For example, in the gallery cafeteria there are no signs of Billy Apple® coffee, tea, wine or cider. Not to have these consumable products available for visitors to purchase while the exhibition is running hints that the left hand of the Gallery doesn’t know what the right is doing, and that their commitment to elucidating the ideas embodied in this show is not serious.

Looking at Christina Barton’s organisation of themes in this exhibition, there is a vaguely looped trajectory that goes like this: (1) Entrance: pre-Apple Barrie Bates; (2) Young Contemporary [London] (3) Electric Gallery [Neon works]; (4) In the Area of the Negative Condition [New York]; (5) From the Collection [commissioning as sole content]; (6.) The Ultimate Standard [Gold and the Golden Rectangle]; (7) Art Transactions [looking at the ‘bare bones’ of art commerce]; (8) A Brand Looking for a Product; (9) The Immortalisation of Billy Apple(R); (10) Good Works; (11) The Given as An Art Political Statement [outside corridor]; (12) The Racing Suite [atrium below].

My favourite rooms are In the Area of the Negative Condition (I admire Apple’s dogged obsessiveness), From the Collection (42 elegant items that reference their owners), Art Transactions (his impressive nerve), and The Given as an Art Political Statement (so relevant today). The ones I cringe at are Good Works (Is Apple about citizenship and generosity?) and The Racing Suite (artist’s hobby). However, because Apple’s practice is so complicated and layered, I know that even in areas of his work I dislike - if I look at them again - I am likely to discover links with other aspects I admire, that I can mentally engage with.

The corridor gallery on Level 1 - with its two long walls of The Given as an Art Political Statement, and censuring of gallery spaces through various red painted critiques - is deeply subversive, even though there is no red paint to be seen directly on any Auckland Art Gallery architectural features. It is only detectable in photographic documentation of other galleries. If they are sharp, there is a possibility that gallery visitors will end up thinking about the design details of the very building they are in - especially its top floor galleries - and grasping what Apple with these works was getting at in 1979, and (with this show) is tangentially getting at now.

... and a summary of a written response from the curator, which unfortunately hasn't been made publicly availabe for debate. ...

... and a summary of a written response from the curator, which unfortunately hasn't been made publicly availabe for debate. http://www.overthenet.blogspot.co.nz/2015/04/going-public-not.html