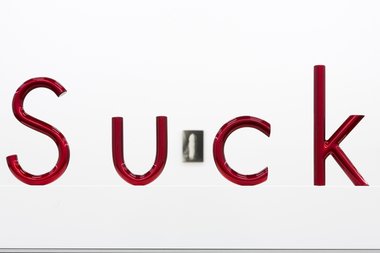 This is a short satellite show to the major Billy Apple® retrospective The Artist Has to Live Like Everybody Else that recently opened at Auckland Art Gallery Toi o Mamaki. Suck is the first section of a two part exhibition, Poetry in Motion, that Artspace director Misal Adnan Yildiz has organised, the next part being an international group exhibition. It’s his second Artspace presentation.

Suck, in a way, is a distant cousin to the famous double entendre French pop song Les Sucettes (Lollipops) which in 1966 the much older (and later legendary) songwriter and singer Serge Gainsborough persuaded an eighteen year old France Gall to sing on French television. Later she felt exploited after she discovered the underlying sexual meanings.

The sculpture, Suck, is a typical Pop Art work of Apple’s, first made in London in the early sixties. It references candy cane or Brighton Rock in the arabesques of its letter design, and has the same glowing dark red as some of his apple sculptures also coated in automobile paint, currently on display in the big AAG show.

The doorway where the big Artspace gallery provides access on the left to two smaller ones is also a crucial part of this installation. The small gallery normally on the left has been walled over, and that plane painted bright red. The red wall initially seems to be a nod to Apple’s Points of View wall painting that he made in RKS Art in 1981, where he painted sections of gallery wall red that were visible through two separated doorways, until you realise that the red band is extending out a couple of feet out into the main gallery like a sort of tongue. The room is dark and seems like a rectangular, vertical, mouth.

When you enter it you discover that the walls of the very long thin gallery are painted matte black and the only light in the room is from a skylight at the end. On the end facing wall, below the skylight, on a canvas, is an image of a man’s buttocks.

Artspace’s dark narrow gallery here, such a contrast to the bright white, square space on the other side of the wall, has got a furtive ambience. It is like a boxlike cave or an underground gentlemen’s convenience, a secret place where gay men can meet and have sex. By entering the dark doorway there is a sense of illicit viewer participation, particularly if you are male. It is as if by crossing that threshold you are putting your body into a ‘mouth’.

To build up these resonances of subterfuge Yildiz and Apple have made a show by recontextualising works made in both London and New York, works that are separated by four years but now brought together. Through its images of intimate male body parts, this exhibition also references several Body Activity works (1971) - bodily secretion wipings - that were presented in the Adam Art Gallery show, Billy Apple New York 1969-1973 in 2009, and which are now in the photographs of A Requested Subtraction (1974) showing in The Artist Has to Live Like Everybody Else. These Body Activity items (on absorbent tissues) came from Apple’s body as if it were the initial ‘parent’ source of ‘Art essence’ or ‘Artness’. They are biological byproducts linked to one specific man, but the images that mentally generate the Auckland viewer’s narratives of Suck are not firmly tied to any known individual, but anonymous.

Suck is an exceptionally interesting Billy Apple® project because it is a blend between the body artworks and the artist’s interest in desire when creating a brand to sell a product. The drives that compel individuals to eagerly pursue sex and pursue wealth, power or status come across as related.