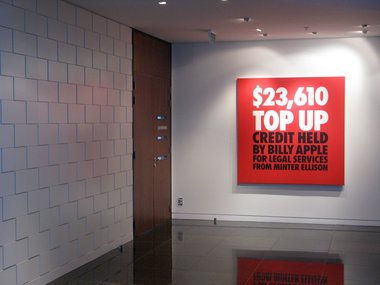 Apart from the interest in proportion, there are other structural metaphorical similarities. The red polyester apple at Minter Ellison Rudd Watts, though specifically botanical, is a symbol for the Apple body and mind, just as the Godkin gallery column is a surrogate for the Flint column.

Two extremely interesting Billy Apple exhibitions currently showing in downtown Auckland, are both - in very different ways - about his ongoing interest in proportion. One at Antoinette Godkin, is a synthesis of two exhibitions he had with the late Greg Flint in 1996 and 1997, shows that examined the measurements and peculiarities of Flint’s exhibiting space.

The other (organised by Starkwhite) is about the difficulties of any artist trying to financially survive, and one of his Paid/Transaction series. In 2005 Apple had $100,000 Credit Held painted on a wall of Minter Ellison’s office in the Lumley Building declaring that he had $100,000 credit with the firm for legal services. This year’s new work $23,610 Top Up is another painting, but on canvas, declaring that he has received further substantial credit. The amount comes from the canvas size, its percentage of the square area of the original $100,000 Credit Held wall painting.

With the Flint shows now re-presented at Godkin, Apple has used its slightly different location to blend the two mid-nineties displays together. They are overlaid and shunted back away from the street. The changes are that the identically shaped and sized space of Flint’s Gallery had a back wall where the single column that is currently revealed was hidden. Another column - then exposed and used as a support for the 1997 green Bar Graphs and measured to create the 1996 Reliefs and Drawings - is now covered by the end of Godkin’s office wall.

These two mid-nineties exhibitions had different functions. The 1996 show developed a set of spiralling Golden Rectangle drawings that started with the cross section and vertical planar alignment of the column. When positioned over the floor plan of the gallery space it accentuated the architectural discrepancies and misalignments. Apple teased these mistakes out by hanging four identical but rotated reliefs (made of compressed foam board) from four gallery corners, and putting each nail hole in the respective (pertinent) dangling relief floor plan corner.

The 1997 exhibition further extended these ideas by placing the proportions of the four spiralling Golden Ratioed rectangles onto the actual column planes (around the initial cross-section) so they added up to 100%. Vinyl was used to make a green bar graph on the column, and opposite each plane on a facing gallery wall was a disc of acrylic, a pie graph divided not only into a Golden Ratio division (61.8% /38.2%) of Artist Cut/Dealer Cut, but scaled in proportion to its paired Golden Ratio green bar.

In the current Godkin show these two projects are interlocked together - using a different column - in a realigned but identically shaped space.

Moving down Lorne St, through High and round the corner to the Lumley Building at 88 Shortland St, and up to Minter Ellison Rudd Watts on the twentieth floor, Apple’s Golden Ratio credit Top Up is to assist the legal procedures necessary for the trademark usage and product marketing of his registered brand. That brand is of course himself as constructed identity, but taking it several stages further than the initial 1962 transmutation from Barrie Bates to Billy Apple, embracing the creation of art that has as subject matter its own commercial activity - and to incorporate a real purchasable and edible breed of apple as part of that.

That is what the $100,000 Credit Held work and its Top Up is about, setting up these legal processes of commercial registration, and the use of the Apple logo to identify his intellectual property. In 2007 it began as an unregistered trademark and the next year it became a registered one.

As part of this Minter Ellison Rudd Watts exhibition Starkwhite have included - besides the works I’ve already mentioned - a polyester resin cast of the variety of apple, the ‘Billy Apple’, that Billy Apple wants to market, and four small canvases using printed ink that announce a set of goods and services Apple now has trademark registration rights for. Class 16 (Printed Matter) is black, Class 25 (Clothing) yellow, Class 31 (Fresh Fruit) red and Class 44 (Orchard Services) is green, and all are based on Certificates of Trademark Registration that the artist and his MERW legal team had to apply to a committee of Trademark Examiners for.

That both these exhibitions are on at the same time apparently was not a planned strategy for Apple, but it is interesting that apart from the common interest in proportion, there are other structural metaphorical similarities. The red polyester apple at Minter Ellison Rudd Watts seems to function like the single column in Godkin. Though specifically botanical, it is a symbol for the Apple body and mind, just as the Godkin gallery column is a surrogate for the Flint column. And just as the pie charts and relief floor plans conceptually revolve around that column so do the Trademark Registration Paintings, Credit Held statement and Top Up revolve around the ‘Billy Apple’ apple. An intriguing exhibition pairing.

The works in the Minter Ellison Rudd Watts offices can be viewed from 9 - 5, week days. Antoinette Godkin is open Tues - Fri, 11- 5, and Sat morning. With them are two highly informative essays by Wystan Curnow and Andrew Clifford that you can take home to read.