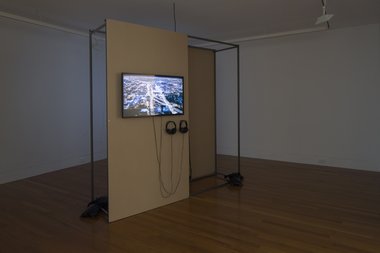 Organised by Andrea Bell, a New Zealand curator/writer living in Melbourne, Creative Suite is a four artist video show looks at digital processes linked to software technologies and attendant structural concerns that often incline towards chaos. The four plasma screens have been organised to fit exhibition furniture designed by Andrew Kennedy, a member of Te Tuhi's staff. Kennedy has a distinctive ‘look' that is often palpable in Te Tuhi exhibitions.

Organised by Andrea Bell, a New Zealand curator/writer living in Melbourne, Creative Suite is a four artist video show looks at digital processes linked to software technologies and attendant structural concerns that often incline towards chaos. The four plasma screens have been organised to fit exhibition furniture designed by Andrew Kennedy, a member of Te Tuhi’s staff who has worked on other shows such as Mercedes Vicente‘s interviews with Art and Social Change Research Group: Delhi residency. Kennedy has a distinctive ‘look’ that is often palpable in Te Tuhi exhibitions.

Of the four selected Australian artists, probably the most well known contributor is Nicholas Mangan, due to his shows at Hopkinson Mossman and his video in the current Chartwell Collection show at Auckland Art Gallery Toi o Tamaki, A World Undone curated by Stephen Cleland.

Mangan‘s Some Kind of Duration - with its sequence of grainy b/w images documenting architectural photographs and its own process, set to a soundtrack of whirring motorised scanning noises - makes fecund comparisons between the Mayan Palace of the Governor of Uxmal in Yucatan, Mexico, built around 900AD; a huge concrete incinerator in inner Sydney designed by the architects Walter Burley Griffin and Marion Mahony to cremate urban waste, that was influenced by Mayan design and built in 1936; and the shape of the photocopying machine CanonNP6030 used in this work. The latter was produced in 1993, the year after the Sydney incinerator was demolished.

Melbourne artist Joshua Petherick has exhibited in Auckland before in a couple of group shows. His eight minute colour video, Glass Tables III, made with a flatbed scanner pressed against an iPhone camera, and transparent objects like a glass skull, an empty Hermes (Un Jardin Après La Mousson) perfume bottle, and what seem to be shards of crystal, or crumpled cellophane. In an oddly beautiful sequence of four images, two are rapid fire and staccato in mood, with Photoshopped ‘collage’, while the others are very slow documentation of gradual, blurry, horizontal (scanner?) movements on the other side of the focussing field.

The collective Greatest Hits‘ video is a film of helicopter footage of Los Angeles at night mingled with aerial New Zealand Police video (supplied to the media) of their dawn raid on Kim Dotcom’s mansion. The spectacular panoramic vistas are accompanied by a hauntingly slowed down version of the Teddy Bears 1958 Phil Spector song, To Know Him is to Love Him that now sounds a little like Julee Cruise. As with Mladen Bizumic’s use of a slowed down orchestral version of the Jagger-Richards song, Under My Thumb, in a couple of his videos, Greatest Hits’ aural component here packs considerable emotional punch.

Sydney-based Agatha Gothe-Snape‘s contribution uses text formatted via PowerPoint so that it lunges at the viewer from all sorts of angles or is embedded in various geometrical shapes. Structured around an edited conversation, it starts off as a meditation critiquing participatory art - and is initially quite focussed and engrossing - but gradually loses direction, becoming fragmented, flippant and meandering.

The disintegration and repetition in this one sided dialogue is obviously deliberate and mischievously tedious, but in the Te Tuhi space it is competing with an adjacent installation by Ignus Krunglevičius, which is extremely tightly written in its strident presentation of a visual text. Gothe-Snape’s work (EMPTY GESTURE WITH SARAH RODIGARI) is combined in a loop with another video (Fast Meetings, Fast Feelings, 2012) that consists of rapidly alternating half screens of contrasting planar tones. Together they appear to allude to the energised parts of Petherick and the decay examined by Mangan, and seem the odd-work-out when compared with the other image based works - though the words and phrases are certainly treated as ‘imaged’ objects. Mangan and Petherick in particular provide richly layered videos in this travelling show that deserves to reach a much wider audience.