Interviews from Delhi in Auckland 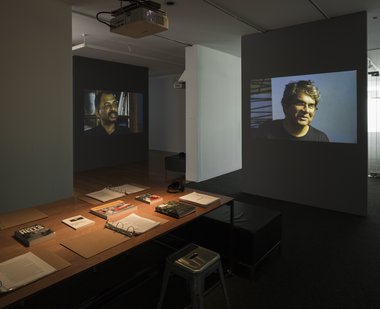 It takes a while to get your bearings contextually for this show, because although there are lots of folders and books laid out on tables to set the scene, it is confusing. It's best to first ignore them and zero in on the filmed, highly articulate, charismatic individuals, and see who draws you in to their conversation.

This exhibition looks at the work (actually the driving ideas and personalities, rather than exhibited material objects) of seven Indian artists/art historians who reside in (the National Capital Territory of) Delhi. Most are passionately involved in political activism or overtly trying to achieve social change, and almost all are connected to Non Governmental Organisations (NGOs) they have helped set up.

It takes a while to get your bearings contextually for this show, because although there are lots of folders and books laid out on tables to set the scene, it is confusing. It’s best to first ignore them and zero in on the filmed, highly articulate, charismatic individuals, and see who draws you in to their conversation. Mercedes Vicente‘s questions are responded to enthusiastically, filmed by her partner Peter Wareing, with all the speakers being skilled at speaking on their feet, at projecting their complex ideas clearly. Later on - perhaps using the many links in this article - you can research further those that spark your interest, the groups they play a role in, and salient factors within their conversation. You might even want to go back, look at the conversations again (Vicente’s questions are presented textually on the screen), and examine the literature.

You need to ferret around because in fact, the introductory material on wall labels doesn’t really help much as a lead-in. For Aucklanders to get a good contextual understanding of what the artists are talking about, more detail would have been useful, with more elaborate information as to who these people are, what their achievements may be, and how they are connected.

Now there is an argument that maybe these interviews should be transcribed in the way that say Lucy Lippard, Hans Ulrich Obrist and Grant Kester have documented conversations, and turned into a book, but listening and watching these thinkers yak has a whole other enjoyable level. Vicente provides seven interviewees within six videos, and in Andrew Kennedy’s innovative design, projected cleverly onto wood veneer panels (matching the brick walls of the courtyard seen through the window) positioned within three enclosures. There are two tables of information available to sift through.

The personalities are extremely varied. Prayas Abhinav is a textual poet as much an artist or curator, and less perhaps an overt activist and more a creator of aphorisms. He speaks about the time he gave a talk on TED, the well known online forum for innovators, about the benefits of getting lost, of being deliberately clueless in one’s research and not over determining your method. When talking to Vicente he describes his subsequent disillusionment with the forum because of its superficiality, clubiness, and buzzwords. At first he sounds over cynical and harsh - a disgruntled, recklessly provocative nihilist - until you look at his projects like My Creativity and Masking, to discover that there is a consistent ‘anti-method’, an ‘anti-structure’ philosophy being carefully elucidated and expanded on. Last year Abhinav was in Sarai Reader 09: Episode Three, curated by Raqs Media Collective.

Raqs Media Collective is a trio of Indian artists whom Charlotte Huddleston brought out to New Plymouth for her Linked: connectivity and exchange show of December 2005 at the Govett-Brewster. (They are also known as the co-curators of Manifesta7 (2008).) One of their members is Shuddahabrata Sengupta who Vicente also interviews. (He like Abhinav is a prolific writer. He once contributed an excellent article on Delhi telephone booths for the 2008 Enjoy publication, Public Good.)

Sengupta (as part of Raqs Media Collective) also helped found Sarai, an organisation that initiates and publishes research on urban life, culture and the media. His half hour Q & A session with Vicente reveals him to be an exceptionally concise thinker. He makes very considered distinctions between his activities as an artist, as an activist, and as a concerned citizen, being very careful to control the separations and overlaps, the public and the private.

One of the collaborators with Raqs Media Collective within Sarai is Mritunjay (Joy) Chatterjee who is interviewed with Sreejata Roy. Both are involved with community village projects, like in Roy’s case, The Park, but Chatterjee uses new media technology through CyberMoholla and (as with Roy) Ankur Society for Alternatives in Education. In their conversations (as with Dr. Y. S Alone) they sometimes referred to specific motifs used in painting that needed to be visually incorporated somehow with their ‘talking heads’. The details could have been illustrated. Their interview was also positioned too closely to that of Prayas Abhinav, and suffered through the visual distraction.

The longest interview (50 mins) conducted by Vicente is with Ravi Agarwal, an artist (photographer, video, installations), curator and ecology writer. Preoccupied with human rights and environmental issues such as chemical waste, he founded the organisation Toxics Link. Agarwal speaks of ethics as the rudder that guides his actions, and is unusual in that his background, instead of being art or political studies, is that of engineering. His work was shown in Documenta 11, and like the others Vicente spoke to, is clearly a seasoned lecturer and educator.

The only non artist in the group is Dr. Y. S Alone, an art historian and eloquent advocate for social change. He speaks at length about the caste system, the conservative forces that perpetuate it, and the role of the Dalit (Untouchables). To this end he refers to the revolutionary work of the constitutional reformer Dr. B R Ambedkar. Alone was brought up in an atheistic household and is a tireless advocate for Buddhism. He sees it as a non-theistic system which promotes rational analysis that can improve the quality of life for all classes.

Gargi Sen is a film-maker, a seasoned maker of documentaries many of which explore social issues, and head of Magic Lantern, a film-making company not driven by a profit motive. She also is the director of Gora, a popular television series based on Rabindranath Tagore’s 1909 novel that she and her brother Somnath adapted for 26 episodes. In published comments about the film industry, Sen has pointed out how independent film makers are often restricted by screening and distribution regulations linked to cinemas and big budgets, so they sometimes try to present their low budget films in other formats, like video parlours or booths. A couple of other Vicente interviewees point out that the international art gallery circuit is a more democratic alternative (with less governmental interference) for forums examining political issues.

These conversations are worth listening to several times over, but you need to weave in some research to get the most out of them. With so much recent Indian news coverage being of ghastly crimes and destructive chaos, it’s enlightening to see such positively-minded, erudite and formidably inventive individuals elucidating their ideas, rising to the challenges of building a more equitable and just society.

Tomorrow Warren Feeney looks at the simultaneous presentation of this exhibition in Christchurch.