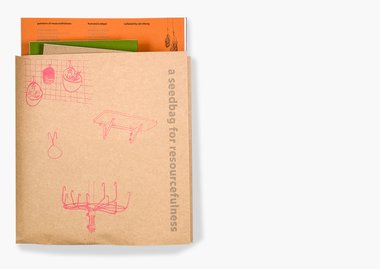 Cheng's small books of conversations are excellent introductions to four aspects of her catholic interests, shedding a lot of light on her interlocking enthusiasms. She chats in a relaxed—but very informed—fashion with Lucie Schroeder, an interdisciplinary artist from Hamburg; Christopher Dell, a jazz musician and theorist on improvisation; Heidi Salaverría, a philosopher / artist interested in doubt; and ‘substack', a computer programmer based in Hawai'i.

Known for her constant search for ‘amateur’ ad hoc design that uses recycled materials and ignores corporate interests, Xin Cheng here in a folded paper pocket presents four small pamphlets examining ‘everyday’ design that features recycled materials—problem-solving that is elaborated on through a series of conversations, mini-essays and musings—plus a larger more densely illustrated publication of collated designs that is similar to her Distracted Reader publication, the collaboration she did with Allan Smith.

The rich pragmatic content Cheng draws on is based on improvised or inherited ‘street-level’ discoveries made during her nomadic travels through densely populated cities in Europe and Asia-Pacific over 2006-2019, using various residencies as bases, and her university studies in Hamburg. Her title for this elegantly presented collection, with its agrarian references, alludes to a farmer recycling a grain sack, and the potential fertility of the well researched ideas contained within.

Cheng‘s small books of conversations are excellent introductions to four aspects of her catholic interests, shedding a lot of light on her interlocking enthusiasms. She chats in a relaxed—but very informed—fashion with Lucie Schroeder, an interdisciplinary artist from Hamburg; Christopher Dell, a jazz musician and theorist on improvisation; Heidi Salaverría, a philosopher / artist interested in doubt; and ‘substack’ a computer programmer based in Hawai’i.

These dialogues with their alternating paragraphs and story-swapping (in nice little pocket notebooks) are terrific reading—and full of unexpected pithy observations and unusual yarns. Certain moments draw me in.

For example, while discussing with Lucie Schroeder the cosmetic, medicinal and nutritional value of various plants—and examining the nature of ad hoc functionality—Cheng explains that “For my thesis, I was going to write one chapter on the luxurious impoverishment of industrially advanced societies. But then I thought, maybe this position is too drastic for some of the people who are reading it…I feel like, you need direct experiences to shift your perspectives. So showing pictures, reading and writing is not enough…But if you have been somewhere—where you have to engage with your own waste, and work out how to treat this water so you can drink it—that is a different experience: thinking-in-action. (9-11pp)”

Christopher Dell is an urban theorist and design lecturer with an interest in closely analysing improvisation, and extending its principles out far from structures within jazz. He states, “From the music making I know that my theoretical concept works…I know how to create framing and situations for improvisation…how action is organised in an improvisational way…With the shift in architecture and urban design from object to process, this theory became transposable from music to another disciplinary field.”

He elaborates further, “Reflective doing—not just doing—[is] really checking the whole framing of this doing, the whole assemblage. The art of improvisation is very much about how does it come about…How do you create the spatial arrangement for that improvisation to happen? It’s open form. Not completely random. Open for whatever potentiality…the constructive working with contingency in an assemblage of actors, things, actions and discourses on sites. (14-16 pp)”

In her discussion with substack which mostly looks at software, hardware and processes of recycling, Cheng mentions travelling through Cambodia and the horror of walking through a prison of the Khmer Rouge. There she discovers its own chilling variation of resourcefulness:

“The most harrowing example of resourcefulness I encountered was in Phnom Penh, Cambodia: at S22, a former school turned into a prison and torture complex during the Khmer Rouge. There were door locks made of bent pieces of metal. That’s when I realised this way of making, like all technology, has no inherent ethic of its own. Like a knife, it could be used to prepare nourishing food and to harm lives. It is up to the living beings who interact with the technology as to how it is used. (p24)”

With Cheng’s long and intricate conversation with the philosopher/artist Heidi Salaverría, I found the examination of the beauty of doubting and the value of confrontation the most riveting—even more than the discussion of improvisation that happens before and after; and to which it is linked, for “the joy of doubting [ ] has a lot to do with improvisation.”

For Salaverría, “the power of doubting lies in doubting the certainty of [ ] inner authorities (internalised authoritarian voices telling you you’re not good enough, you shouldn’t do or feel this or that). Ask them: Why should I believe you? Why do you think you’re right? (8-9pp)”

As for confrontation: “Why is confrontation always considered as something dangerous? Isn’t there a mode of fresh, benign confrontation and isn’t there a mode of malignant harmony? Similarly, I believe there is benign and malignant enduring: Not saying something because I think I owe somebody something, or I shouldn’t say something, I feel I’m not entitled, etc. has proven mostly to me in the long run to result in more conflicts, because the problem didn’t go away and accumulates like a minus in your bank account. The benign enduring instead is to say: ok, this feels uncomfortable, menacing, there is fear, but I’ll go into it, and, more importantly, so I’ll remain there for a while. (p11)”

If you wish to purchase a copy of this set of publications, and live in Europe, you can order it from Materialverlag https://material-verlag.hfbk-hamburg.de/. Or, if you are in the US you can contact Half Letter Press https://halfletterpress.com/. The price is 34 Euro or $50NZD. If you are elsewhere you can send Xin an email: xin@makeshifting.net. You can even barter if you write directly to her.