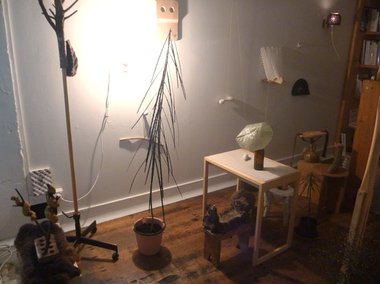 Like most artists, Cheng is a hoarder and inner city beachcomber, constantly on the lookout for odd but simply constructed furniture, spontaneously assembled tools, natural or industrial hardened residues and dismantled items of clothing. There is a lightness of touch, an insubstantiality in her choice of materials, an attraction to things flimsy and delicate.

This exhibition surprised me. After two or three earlier shows that I’ve seen by Xin Cheng, I’d always considered her chief project to be about information accessibility - but presented in a dry austere manner, coupled with an enthusiasm for design and its global variations. She has had a penchant for presenting informal reference libraries incorporating unusual books (usually packed with illustrations and borrowed from many sources) laid out on plywood trestles. An acessible form of conceptualism that can nevertheless be traced to Mel Bochner and Art and Language.

This Split/Fountain presentation, like last year’s Elam submission apparently (I didn’t see it), is very different, going beyond books alone to show an interest in form and sculptural experimentation with unusual materials like ossified rubber, dried fungi, folded paper, crumbly scoria, woollen socks and native plants. But it does incorporate a lot of items modelled on plans found within those publications she likes, especially ones about design projects from faraway places like Finland, improvised Russian utensils made from recycled ‘rubbish’, or obscure Scandanavian knitting patterns. (Plus she presents her own book - a compilation of recipes.)

So we have here a sensibility that loves design as a problem solving methodology, blended with a visual aesthetic that includes the wire of Richard Tuttle, the rocks of Finn Ferrier and the cardboard of Eugene Carchesio. Like most artists, Cheng is a hoarder who happens to be a voracious reader, and (like Baudelaire’s ragpicker) an inner city beachcomber, constantly on the lookout for odd but simply constructed furniture, spontaneously assembled tools, natural or industrial hardened residues, unusual textures, and unravelled items of clothing. There is a lightness of touch, an insubstantiality in her choice of materials, an attraction to things flimsy and delicate - despite her love of rocks and logs.

Now instead of tables to support her found or constructed selections Cheng uses makeshift shelving of string and planks that hangs off the wall. Around these are photocopies, suspended plastic bags and attached drawings. Plus she places various freestanding items (seats included) on the floor, of which in S/F there is not a great deal.

There lies the problem. In this narrowest of venues, Cheng’s project becomes a cluttered installation rather than a precisely organised arrangement of clearly defined, isolated sculptures. Each work bleeds into the spatial domain of its neighbour. The venue becomes in fact a kind of museum storage backroom that is normally tucked out of sight, but which is now visible from the Karangahape Road footpath.

Cheng’s display is a little like a Dan Arps presentation where selected individual items shown by themselves in one space (like in an AAG acquisitions show) look very different from when they were presented earlier in another with a dealer - and so are often later much more interesting. So whether Cheng’s peculiar found objects, or (as is often the case, specially folded papers or cast replicas) hold up in isolation is hard to say. Solo ingredients within groups often look good in clusters, but can bore quickly by themselves.

Yet these works, whilst exploitive of tactility, patterning and other visual qualities, are not like say, Rob Gardiner’s similarly delicate (but more complex) sculptures floating in real space and constructed out of hardware purchases and studio detritus. For Cheng, the history of each recycled component or source of material is important, as is the particular design she is utilising, far more than the effects of light hitting the display or that item’s total effect as a form positioned against a wall. The passion for historical information obvious in her exhibited libraries is still apparent in her sculpture, most of which is functional in some way.

That aspect though doesn’t save the weaker works, for their generating idea or history doesn’t compensate for art that is too visually understated. The list of items provided by S/F does give Cheng’s references and sources in great detail, but sometimes that is not enough. Nevertheless there are enough rivetting works here that will always intrigue, such as pieces of fastidiously creased cut paper based on Josef Albers’ courses, items that happily lock into the viewer’s memory and make this unusual show compulsory visiting.

Thanks for pointing out the typo Ralph - a stupid error I didn't notice. Interesting point too about the male ...

Apologies for any incorrect spelling of the artist's name, but there are two different versions given in the review.

Always with the names of the Fathers—I counted eight in this review. Who, we might ask, are Xin Cheng's women ...

Always with the names of the Fathers—I counted eight in this review. Who, we might ask, are Xin Cheng's women precursors and contemporaries?

Apologies for any incorrect spelling of the artist's name, but there are two different versions given in the review.

Thanks for pointing out the typo Ralph - a stupid error I didn't notice. Interesting point too about the male references. I write about and allude to the art that interests me. Today the references happened to be men.