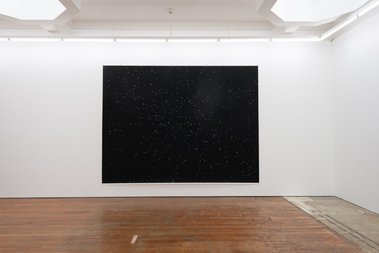 One of the photograms is huge. Absolutely massive. The sand came from Whananui-A-Hei (Cook's Beach) and the image has been enlarged 1000%; an impressively immersive night sky. It links with its celestial tracing to his earlier taxidermied bird sculptures and to the rimu cabinet (of his previous show) with its borer holes filled with gold.

In this intriguing Zac Langdon-Pole show on Lett’s ground floor and basement corridor, the Berlin-based artist—and BMW Art Journey recipient—presents five cross-sectioned models of human eye-sockets and a tongue (with added shell and gravel elements); a collection of ten coloured geometric blocks that appear to present a model for a multi-cultural society; and seven photograms (made with sand from selected beaches or parks) that wittily allude to night-skies and the global flight patterns of migratory birds.

As you’d expect from Langdon-Pole, subtle nuances abound. The three-dimensional tongue is surrounded by Xenophora sea shells (delicate spiralling conches and pebbles) that suggest the hearing of crashing wave sounds; wee megaphones perhaps for that muscular organ that reference foreigners in their name. Paradoxically the coloured blocks of Assimilation Study suggest—with nine being carved of wood and one extraordinarily of meteorite—values aligned with individuality not community.

Some glass eyeballs contain fluffy dandelion seeds, alluding to planetary air currents and forces outside the body, while the photograms vary greatly in size, surface sheen, particle density, and depth of field; each has its own ‘cosmic’ character.

One of the photograms is huge. Absolutely massive. The sand came from Whananui-A-Hei (Cook’s Beach) and the image has been enlarged 1000%; an impressively immersive night sky. It links with its celestial tracing to his earlier taxidermied bird sculptures and to the rimu cabinet (of his previous show) with its borer holes filled with gold.

The tampered-with medical models of head parts (organs of speech, taste and sight) fascinate. They raise the question of whether they are discrete and independent as mysterious units of meaning, or do they extend the planetary conceptual resonances of the photograms? Obviously—with the wind-borne dandelion seeds and water-lapped beach shells—they do. Yet (as mentioned) the nearby colourful carved block work trumpets individualistic connotations. It resists community spirit. It (with its triangular chunk of grey meteorite) seems to endorse uniqueness, separateness and isolation. A veiled reference to Brexit and Trump’s nationalism perhaps?

Langdon-Pole overall though seems to be advocating a Gaia type sensibility where the model organs represent the earth’s body, and humanity’s hopefully destined role to eventually protect it. Eyeballs are called orbits and seen as rotating planets. In this richly layered, complex show, personification of sensory organs is used to elaborate on what most of us agree are profoundly urgent political / ecological issues.