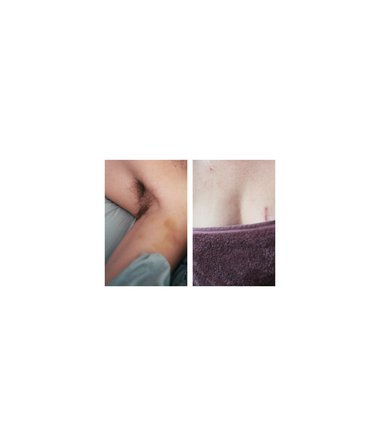 After the bed sheets are acknowledged, apprehended, walked through—after we have encountered the literalness of it all—we are ready to encounter the diminutive photographs, mounted and framed, on the gallery walls. From large bold declaration to small shy revelations, the discrepancy is amusing, charming and entertaining. And what we are given, or allowed to see, voyeuristically almost, is a slight glimpse into intimacies of a kind. This is where the indirectness takes over.

Question. In the world of the visual arts, what might one nominate as the equivalent of ‘chick lit’? A good place to start might be the current exhibition on at Weasel Gallery, Hamilton. It is the work of Ophelia King, teasingly entitled Teething, and you could be forgiven for thinking it might be a sort of counterpart to Bridget Jones’s Diary.

It is in fact a kind of diary, a potted history of the early stages of romance, or as King herself puts it, “the honeymoon stage of her relationship.”

This is art at its most autobiographical, but there is no shame in that. Half of literature—and a greater proportion of art—pumped out in the twentieth century has had personal content through the creator fidgeting away at the base of the production of the material. Almost all artists here in New Zealand, from Colin McCahon to Shane Cotton to Kushana Bush, reach around inside their own psyche for material to work with.

Often that fact is unstated, disguised or otherwise sublimated, but in King’s case, it’s upfront and candid. No shyness or circumlocution here. What you see in these tiny photographs, is what you get. No allegory, symbolism, metaphor or glass darkly is employed for its disguise or distancing effect. The mask is not utilized. She is direct and unapologetic.

The moment one enters the gallery space, that frankness becomes evident. What initially takes the eye is not the art on the wall, small intimate photographs of things, but the large bedsheets that hang down from the ceiling, acting as floating walls or passageways one has to negotiate. These are fresh laundered white double size bed sheets; and there’s the rub. What we are witness to is an unadulterated declaration, from the artist, of her recent pairing, ‘marriage’, relationship, act of living together etc.

After the bed sheets are acknowledged, apprehended, walked through—after we have encountered the literalness of it all—we are ready to encounter the diminutive photographs, mounted and framed, on the gallery walls. From large bold declaration to small shy revelations, the discrepancy is amusing, charming and entertaining. And what we are given, or allowed to see, voyeuristically almost, is a slight glimpse into intimacies of a kind. This is where the indirectness takes over.

For example: an image of two slightly browning apple cores sitting up together on a window sill. I said earlier that no symbolism was employed, but obviously that is not quite the case. The eaten apple in the Western literary canon simply bulges with erotic allusion. King flirts with this citation by using After as a caption which is the counterpoint to its companion piece, Before, that depicts two rosy red apples comfortably ensconced together on a bed—sheets slightly crumpled, pre-coitus. One is reminded of Sarah Lucas’ Au Naturel (1994), but King does things a bit more delicately, with a little less vulgarity.

We get more down and dirty when it comes to a photograph of the artist’s naked hip, in a work of the same name. It’s a close-up close encounter of the artist lying down like one of Ingres’s Bathers to reveal two lovely mounds of flesh, luscious enough to eat. But the title brings us back to reality with its banal and clinical description.

King obviously wants her cake and eat it, her romance and her reality. She swings, calculatedly, both ways, like all suspicious millennials, open to fantasy but with one careful eye on the weather. Soft focus here toys with hard edged sanity. Its companion image, Tim Tam, sees the male seductively half disrobed with the chocolate confection suggestively stuffed down his shorts, the tip of which pokes up into view like an engorged phallus. Eat me.

Afternoon Snack is more of the same—a close-up of the male crotch in speedo type briefs, half a feijoa lying provocatively (and anatomically appositely situated) on a bare torso. The glass employed as protective cover for the photographic image is suitably steamy—mildly frosted bathroom glass, (not quite a glass darkly)—featuring fully aroused embossed stars.

Elements of cynicism and romanticism play off against each other in other frisky and ironic ways as well—hoping for happy-ever-after, but more than aware of the rude data to the contrary.

Where this directly works itself out is in Buttercup, a dual image abutted together, one of an unflattering photo of male hairy legs wrapped in a towel, the other a text scrawled on velvet, asking, “Do you like butter?” In context, Bertolucci’s film, Last Tango in Paris, immediately springs to mind and what Brando and Schneider were doing with the stuff. However, true to form, a more innocent take on the matter is being alluded to—the childhood game involving buttercup flowers. Sweet and saucy arm-wrestle for attention in this pairing.

King also does cute. There’s a Love Seat, especially constructed by Todd Stevenson for the show: a white powder-coated mild steel bench, complete with surfaces that had love-hearts scratched into them at the opening.

Even cuter is Eyelash Wishes and Butterfly Kisses, a minimalist work that simply consists of two plucked eyelashes, one male, one female, and mounted under glass. The frame is made of white lumpen clay, formed by Karl Bayly, which provides a nice juxtaposition to the otherwise delicacy of the subject. Butterfly kisses, of course, to those who know, represents a seismic shift in the luv cosmos.

Bruise and Hickey, and Holding Hands and Making Babies, play the same game, sometime twee, sometime mordant, often both at the same time.

And to round off this apéritif of affection, there is music, especially composed by Liam Pram to accompany these small, intimate and closely cropped images, its cinematic sound of affecting piano strains putting one in the mood for l’amour or something close to it.

All in all, this is a delightful, clever, witty, show; part sardonic, part soulful. Helen Fielding would be proud. Jane Austin would understand. So would the writers of The Ladybird Books For Grown-Ups. See Series 999, Dating. Highly recommended.