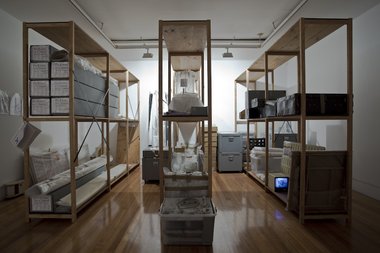 most of the works in this show have a distinctly analogue character. It feels all the more distant given the presence of digitised archives and collections in our daily lives.

There’s something quite amusing about staging an exhibition that looks at collecting during the height of Auckland’s humid summer. Anyone who has watched a treasured artwork or book expand and warp with moisture during these months understands the difficulties of preserving a collection here. Nevertheless, the latest group show at Te Tuhi Centre for the Arts Unpacking My Library brings together artists who contemplate the trials and pleasures of collecting; of keeping objects and ephemera that one can’t quite let go of.

The stage for this exhibition is duly set with Neil Pardington’s large-scale photographs of museum storage rooms and equipment. Much like nocturnal creatures, artworks and museum objects have another, somewhat unseen life away from exhibition spaces and studios. Pardington documents this air-conditioned world of careful packaging and specialised storage devices, looking at the storerooms of collections held by New Zealand institutions including Te Papa Tongarewa and the Hocken Library. A ‘behind the scenes’ look is always fascinating, especially when the means of collecting become just as curios as the collection itself, but the themes of this exhibition gain greater traction in other artist’s work.

The entire Estate of L. Budd, deceased member of the et al. collective, is stored in one gallery and reminds us that the packaged life of an artwork often outlasts that of the artist who created it. The coils of bureaucracy are relished in this gallery-turned-storage-room where viewers might peer through tediously detailed (and probably meticulous) catalogue records and carefully crated artworks. The white paint of several of the Estate’s ‘blonded’ objects, presumably dating from the 1990s when L. Budd was said to be active, can be seen through their bubble-wrap enclosures.

Not surprisingly, the relationship between the et al. collective and the Estate of L. Budd is not articulated. Rather than aiding clarity, the Estate’s bureaucratic mechanisms - its intimidating sheafs of records and methods of categorisation - seem to perpetuate an ongoing ambiguity. It is the very promise of perpetuity that is at stake here. Not only does an art practice gain an ongoing presence in a carefully preserved collection, so does its means of organisation. The prescient and troubling character of L. Budd’s Estate lies where its systems step away from their formative functions and start to take on lives of their own.

These concerns are nicely echoed in Daniel Malone’s wall work in Te Tuhi’s largest gallery, Black Market Next to My Name: From Warsaw, From Memory. It acts as a postscript listing all the items the artist can remember including in his fantastic show at Gambia Castle in 2007. This pseudo-catalogue, a graffiti scripted list covering the breadth of one wall, is pretty tame compared to the chaotic undertaking of Malone’s 2007 work which saw him install a massive collection of possessions in Gambia Castle’s five rooms. Individual objects on the list seem banal, but in their collected grouping cigarette packets, plastic bags, records or knitted jumpers became fascinating; a documentation of a life of unfettered accumulation.

Rumour has it that some of the objects appearing in Malone’s 2007 show didn’t even belong to the artist (it’s understandable: who doesn’t have a book or beach towel belonging to someone else at their house?). It does, however, provide problems for institutional cataloguers who need to record and account for every part of an artwork. The acquisition of Black Market Next to My Name in its entirety by the Chartwell Trust/Auckland Art Gallery adds another intriguing layer to this work; an amplification of its absurd qualities.

Unpacking My Library is a show that allows these and many other perceptive connections to be made between artists’ work. Nevertheless, within the terms of the curatorial theme, the most interesting work for me was Dan Arps’ installation of found and remodelled objects. Arps showed a collection of small sculptures carefully presented on and around defunct pieces of furniture. Originating somewhere between an office and a bedroom this collection of shelves, chairs and other fixtures retain layers of dust and other signs of disuse.

Arps’ precise placement of individual pieces gives a prop-like appearance to this installation: a stagey minimalism of found objects. But props for what? These sculptures, both forlorn and comical, imply a personal narrative but evade a clear-cut story. I immediately recognised a set of drawers from my childhood covered in scuffed and torn Garbage Pail Kids stickers from the 1980s (they were a bad-taste parody of the saccharine Cabbage Patch Kids dolls). Arps’ work invokes a kind of nostalgia that is heavily laced with abjection - a grimy element that undermines any sense of sentimentality.

Unpacking My Library operates at a similarly nostalgic distance. Aside from the marvel of Ann Shelton’s digital documentation of the Fredrick Butler Archive, most of the works in this show have a distinctly analogue character. It feels all the more distant given the presence of digitised archives and collections in our daily lives. Years worth of email correspondence, blogs publically cataloguing their subjects’ daily movements and masses of snapshot photos available through social networking sites like Facebook offer an instantaneous form of collection and archival preservation. Instead of this continual murmur of information and images, curator Stephen Cleland creates a highly considered, quiet and controlled environment. The usually bustling gallery has windows shaded, doors closed and the sticky Pacific air brought to a temperate level. It is as though Te Tuhi, a non-collecting gallery, has temporarily tried on the shoes of a stately institution offering viewers a dry and studious relief from the humidity outside. 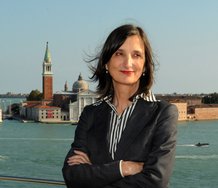 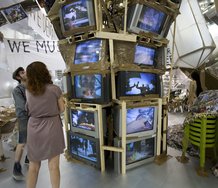 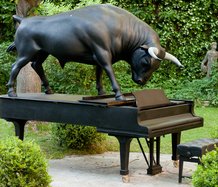 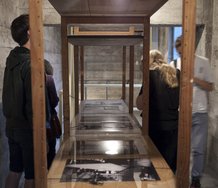