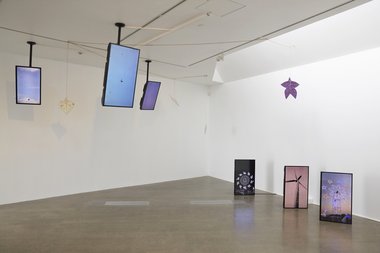 The ‘kites' hanging from the ceiling seem to be a conversation Songsataya is having with Emma Fitts' exhibition around the corner—especially with the common use of heavy felt. Songsataya's use of copper wire however goes somewhere else, implying a symbolic conduit, a conductive material for attracting lingering cosmological forces, perhaps communities of souls waiting to be linked.

In this most sonically delicate and chromatically understated of video installations, Sorawit Songsataya presents a configuration of six ongoing vertical plasma screens (three hanging from the ceiling on the left, another three lined up on the floor on the right) mixed with suspended Thai ‘kites’ of brown string, copper wire, silk, compacted felt and pressed flowers-that remain static.

Simply put, this is a gorgeous, extremely intricate and poetically layered exhibition that seems to be some kind of meditation on freedom (many pale transparent kites fluttering high in the sky is a ubiquitous image) and perhaps religious iconographies (like say, bodhisatvas pulling back from their final access to heaven).

In the small top floor gallery, the light sweeps around, inseparable from the hovering luminous air. The embedded sound emitting from the screens, with its twittering chirrups, squeaks and tinkles, is quite extraordinary in its aural brittleness.

On the left, near the ceiling, we see various kites Songsataya filmed at a festival in Thailand. Some shots use computer animation with a starry sky as a backdrop, others present swarms of kites, hinting at Songsataya‘s ongoing interest in collective minds. These evocative aerial constructions look like hovering spirits with leering faces, nosediving Spitfires, or bizarre insect mutations with waving petal-like wings.

On the right, on the ground, we see fragile neon configurations, towers that glow as fairground attractions in the late evening or advancing darkness. Sometimes the linear motifs (single and static; or in multiple, revolving on a windmill or ‘turntable’) are natural—like stars and butterflies—and sometimes they are manmade, like mechanical cranes or military tanks (that possibly are promotional glorifications of the generals).

The videoed neon light is sensational. It has a stunning optical vibrancy—a strange unnerving and tremulous delicacy—especially in the stages of evening when daytime colour is rapidly disappearing just before the sun slides out of view. It lasts a minute or two before that happens (in nature)—but digitally enhanced I suspect by Songsataya.

On other occasions there are spinning wind-turbine propellers, the flapping billowing sails of wooden-hulled boats raised up on land, or views of a large densely-built city taken from out in the harbour-that look at the processes of movement and change.

The ‘kites’ hanging from the ceiling seem to be a conversation Songsataya is having with Emma Fitts’ exhibition around the corner—especially with the common use of felt. Songsataya‘s use of copper wire however goes somewhere else, implying a symbolic conduit, a conductive material for attracting lingering cosmological forces, perhaps communities of souls waiting to be linked up. All thinking in unison.