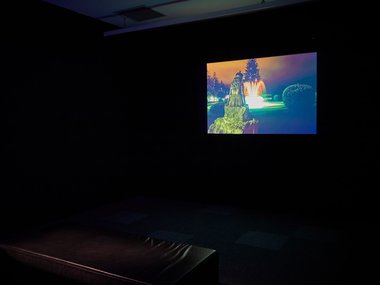 PᾹNiA!'s project attracts multiple interpretations, often globally recontextualising. For example, the colour orange in our current age, is recognised internationally as a mocking symbol for Donald Trump's hair. More visitors would be aware of that than the Dutch connection, because of the notorious President's ability to globally inflame public debate. Orange with chocolate can also be seen as Jaffa, an Israeli liquor. These interpretative complications are loaded with political resonances.

PᾹNiA!
The True Artist Helps the World by Asking for Trust
Co-curated by Gabriela Salgado, Mokopōpaki, and PᾹNiA!

The first of two consecutive Mokopōpaki artist shows (The Dutch Embassy has just opened on K Rd), PᾹNiA!, at Te Tuhi—through The True Artist Helps the World by Asking for Trust—regularly references the work of the legendary art star Bruce Nauman, a brilliant American artist highly profiled in Auckland in curator Natasha Conland’s Mystic Truths show of twelve years ago.

In PᾹNiA!’s conspicuous version of the Nauman neon spiral included in that AAG exhibition, the cursive text of the glowing sign is altered at the end. The wording, ‘By Revealing Mystic Truths’ is replaced by ‘By Asking for Trust.’ Theoretically to enter the ‘Land of Trust’ in this show you need to get a passport from the Pakuranga Customs House/Attitude Arrival Lounge exhibit near Te Tuhi’s front door, and have your photo (to be glued in) taken in front of PᾹNiA!’s neon sign.

The answer to the question of what kind of trust would the world benefit from now, is obvious to most. The planet’s wellbeing is in jeopardy, and our species seems currently to be divided into warring camps (based on economic policies, religious views and ethnicities) where there is little dialogue and often an awful lot of yelling or nasty confrontation. As we are all chillingly aware, debate becoming more and more replaced by horrific cold-blooded violence. Calm and measured reconciliatory conversations are surely desirable.

As a constructed artist-entity (in this country, like Billy Apple or p. mule), PᾹNiA! is a devised nomenclature—one based on Pania of the Reef, the bronze statue in Napier devoted to the Māori legend. The anonymous artist is of Māori and Dutch extraction, and this heritage is reflected in her use of dark brown and fluoro orange. Her incorporation of a circular mirror in a self-portrait brings in (beside herself) the visiting self-observing viewer—another participatory self—invited to mix with the artist’s openly ambivalent attitudes towards Bruce Nauman (unlike say, Barbara Visser, one of two Dutch women in Mystic Truths).

The True Artist Helps the World by Asking for Trust is a complex exhibition with many mingled intended and unintended meanings. The later enrich the show because the exhibition—with its seventeen colourful (largely ‘assisted readymade’) works—has its own internal structural logic, such unplanned significances adding to the accretion of meanings far beyond those presented in the exhibition texts by PᾹNiA!, Mokopōpaki and Salgado, writing that despite someone like Donald Trump being briefly mentioned, tends to overdetermine the show’s meaning. The texts are excessively elaborate in their attempts to cram in artist-driven biographical interpretations. The three co-curators appear to be represented in the show by self-portraits in the form of three tennis rackets placed on the wall wearing earmuffs. Whether irony is intended is uncertain.

PᾹNiA!’s ‘racket’—despite its attempts otherwise—attracts multiple interpretations, often globally recontextualising. For example, the colour orange in our current age is recognised internationally as a mocking symbol for Donald Trump’s hair. More visitors, I suspect, would be aware of that than the symbolic Dutch connection, because of the notorious President’s ability to globally inflame public debate. Orange with chocolate can also be seen as Jaffa, an Israeli liquor. These interpretative complications are loaded with political resonances.

The central motif in the exhibition is that of a game of tennis—described in the catalogue essay as between artist and curator, traditionally the artist’s advocate. Remember that the term LOVE is part of the scoring system of tennis—meaning no points (a snide comment on art’s social status perhaps? After all, as an example, the original Pania sculptor is unknown)—but that as a concept LOVE is a pointed and obviously admirable outcome for our imperilled world as well, an abandoning of suspicion and cynicism.

However artists individually are normally highly competitive, probably because they often make considerable sacrifices. This vocational tendency (by way of example) was showcased in August 1981 in the Christchurch ANZART event (curated by Ian Hunter) when Melbourne performance artist Dom de Clario played a series of squash games in a nearby YMCA against all local artist challengers. He beat them all.

With this Te Tuhi show, although PᾹNiA!’s art historical references include international names as diverse as Sandro Botticelli, Nayland Blake, Yoko Ono, Lars von Trier, Bill Culbert, John Baldessari and Marcel Duchamp, Nauman is a dominant presence—a constant obsession—and PᾹNiA!’s attitudinal oscillations towards and away from Nauman are a salient feature. The fact that two Nauman videos are listed as participating in this show, but are in fact absent, showcases that vascillation.

Harold Bloom is famous for his discussions of romantic poets (their relationships with their antecedents) within his The Anxiety of Influence and Agon series of books. In these he examines the dynamics within the creative process based on the poet/artist’s rivalry with their precursors and the different strategies through which the later artist unconsciously copes, but the tensions detectable in PᾹNiA!’s practice are a mixture of resentment, reluctant admiration, local artworld game playing, and the sort of clumsy postcolonial politics that puts Bruce Nauman and Abel Tasman on a par. The heavy-handed explanatory text from the curators about the artist’s motivation is not always clear, being sometimes convoluted and meandering. Those parts that are helpful, it takes considerable care to find.

The sculptures and wall images are varied. Of the less oblique ones, Portrait of the Artist as Bruce Nauman (After Bruce Nauman) superimposes a picture of the Napier Pania statue over the famous image of a young Bruce Nauman standing in front of his dilapidated studio doorway. She aggressively blocks him out, attempting symbolically to usurp his status in art history. It could be argued she is being parasitical—seeking in another part of the world to gain from his considerable fame—and is in fact defacing replicas of two of his works. Perhaps such a view is extreme and too precious.

Pā Māori Plankjes cleverly mingles the palings of a picket fence—not painted white as is the convention and associated with white, middle-class suburbia, but now painted brown—with links to pa palisades, a crunchy Dutch biscuit and the close-quarters, striking and stabbing weapon, taiaha. The palings are covered with cute little Māori doll stickers on magnets. In ‘native’ costume, these flat squat figures counter the vertical batons’ function as boundary and weapon—while also serving as guardians.

Indian Country and Sore Horse are an attempt to ridicule Nauman‘s passion for horse riding and the ranch he shares with business partner Bill Riggins on land originally inhabited (it is assumed) by First Nation peoples, where—as part of a ‘cowboy’ lifestyle—he breeds and trains horses for working as ‘quarter-horses’ with cattle.

It falls flat because there is a link between Nauman’s early video works where he is ‘training’ his own body, and his later teaching of manoeuvring skills to horses, so PᾹNiA!’s lampooning through the use of inflatable cacti and wooden toy horses seems petulant and misdirected. Nauman’s work, being idea-based, uses his equine activities as a means for mentally developing projects, for ruminating over notional preoccupations. Unlike say the painting practice of his wife Susan Rothenberg, he does not involve the process of manual application but waits for the idea to be fully resolved before starting the physical construction. His ranch activities are creatively and economically integrated into his art ones. One sustains the other.

Overall, I prefer PᾹNiA!’s two carefully installed, looped films (with a single Elgar-based soundtrack, and identical durations) to her sculptures, which can be too laboured and clubby in their artworld reflexivity.

Salut d’Amour is a carefully edited film of a view looking over PᾹNiA!’s (ie. Pania, the bronze statue’s) shoulder as she watches the many colour changes of a nearby spurting fountain. Projected in the wall, it seems wistful, being about loneliness and thwarted desire.

The other film on the adjacent wall plays a big role in this mood. Te Marama Pai is a close up of the moon as it slowly moves diagonally from the bottom righthand corner of a monitor to the top lefthand one; then after a long pause with the screen cloaked in total darkness, it (like an absent lover) returns to traverse once more.

The use of darkness makes these works much more atmospheric than the rest of the show which is visually eye-popping. The latter has much wit but the emotional resonances don’t linger. They are not memorable or haunting, while the film installation has considerable pathos. They raise the question: should PᾹNiA! forget Nauman?

No, not at all, for the exhibition’s title work is brilliant—a considerable achievement showing profundity—and some of the other projects (as I have shown) are intriguing and admirable. PᾹNiA!’s alteration of Nauman’s sign displays a sentiment that is urgently applicable to our time, and as my title above shows, is beautifully paraphrased by Marlon Williams. Love and trust go together.