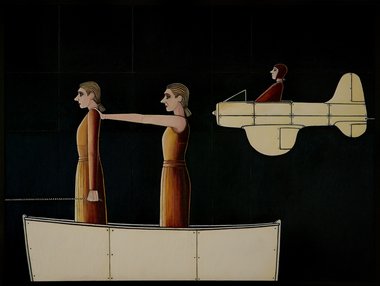 The recurring motif employed by the artist in this drama is the boat, a small and humble ‘clinker' type of vessel into which Judd placed his passengers, usually no more than three, often women standing stiffly to attention and all staring somewhat grimly ahead, almost identical in their physiology — hair, costume, countenance. These stylized figures represented humanity, each taken up on their personal odyssey, one inextricably linked to the human condition involving the expedition and gravitas of life and of death.

A life cut short is tragic enough, but add to the equation the life of an artist at the height of their powers and it strikes more keenly. We think of lost potential, gifts not extended, plus dreams and creativity unrealized. Such was the case with Hamilton artist, Paul Judd. With his MFA from RMIT Melbourne under his belt, Judd was on his way, painting, sculpting and living off his work—a rare feat in this country—but a little over a decade later he was dead.

Currently showing at Waikato Museum is a retrospective of his work, curated by Leafa Wilson, which covers everything from his signature paintings right through to the large abstracts, sculptures— and following back further. Judd had one predominant theme which he mined continuously throughout his short career, employing a variety of styles and mediums in the process. That recurring idea was the notion of the journey, universalised; the one which plays itself out in every life and the greater one against which those lives find themselves placed, the smaller narratives in the shadow of a larger backdrop and grander scale, that of civilization itself.

The recurring motif employed by the artist in this drama is the boat, a small and humble ‘clinker’ type of vessel into which Judd placed his passengers, usually no more than three, often women standing stiffly to attention and all staring somewhat grimly ahead, almost identical in their physiology — hair, costume, countenance. These stylized figures represented humanity, each taken up on their personal odyssey, one inextricably linked to the human condition involving the expedition and gravitas of life and of death.

On viewing this series of works, A Sweeter Ride, Taut, and The Pilot was a Complete Stranger, one cannot help but make comparisons with ancient Egyptian funerary art, given Judd’s repeated compositional format. Those small Egyptian wooden sculptural funeral boats with tiny figurines all staring intently forward, are reminiscent of the artist’s work which in his hands becomes a modernized treatment of these ancient ritualized objects.

It was novelist and poet, D H Lawrence, who in 1929, perhaps thinking of the same imagery and symbolism, composed the poem, The Ship of Death, in which he writes about the preparation for quietus.

Oh build your ship of death, your little ark
and furnish it with food, with little cakes, and wine
for the dark flight down oblivion

But just in case we get caught up and overwhelmed by the gravitas of it all, Judd introduces a comic element into the narrative of these paintings. The levity is captured in the presence of a dinky snub-nosed single winged aeroplane, piloted by some Biggles-like figure, whose posture and configuration might remind one of Snoopy in his flying machine.

The aeroplane is not a subject often utilized by artists. The Futurists did, seriously, and Roy Lichtenstein did, mockingly, but Judd uses it here as both another image to do with the journey, updating and contemporizing the motif, while perhaps hinting, in a droll manner, at the flight of the soul into the next life.

Both aeroplane and boat are gridded in their format which finds an echo in the flat gridded monochromatic ground against which the narrative of the journey is placed. Such a play with abstraction reminds us that Judd was never far away from his second love, that of the non-concrete.

In such a context, one cannot help recalling the father of abstraction, Wassily Kandinsky and in particular the painting of him standing in the prow of a small row boat, blue mountains in the background, painted by his lover, Gabriel Munter, who is rowing the vessel across the lake.

Judd’s journey is also an artistic one that follows a voyage that began in abstraction, travelled into the figurative and back again with several permutations. His early works, like Monolithic, take us into the territory of pre-history, referencing megaliths and the larger platform of the journey of civilization itself.

With paintings like Soft, and its direct reference to the caryatids (classical Greek sculptured female figures providing support for entablatures) we are at another point of departure on the grand expedition of cultural evolution. At this stage Judd is employing text in his work, words embedded in the paint, sometimes smudged or erased.

“Carthage” is one of those words. Here is a citation alluding to one of the greatest epic journeys in Western literature, that of the hero, Aeneas, sailing from the destroyed city of Troy, on a journey that tracks a moral one from passionate individualism to stoic duty and communal obligation.

Judd’s foray into complete abstraction sees his imagination fired by the American artist, Cy Twombly, whose passion for the classical was total. Works like Index/Delphi, see Judd pay homage to the American, where the large canvas, predominately white, is worked up in very pale muted colours, layered and viscous. Into this are embedded meta-script and pictographs that reference notations associated with various element of cultural memory as well as his own motifs.

Judd here is excavating history, on an archaeological journey that takes in the panorama of antiquity, and his small white sculptures, entitled Astrobodes, resembling the base of classical pillars, is a nod to the chronicle of time. Slightly eroded, recording the passage of ages, and made of polystyrene, plaster and paint, they evoke a sad lament for a lost past, becoming both a memorial to the ravages of eras and epochs and a symbolic celebration of a journey once taken.

The final series in the exhibition is a small collection of works, all entitled You Know Who You Are. Slightly reminiscent of the work of Alan Ibell, these small paintings have the same enigmatic quality involving isolated figures confronted with blank doorways or steps that lead nowhere. The title is ironic with the journey unfinished and problematic as we set our faces into the twenty-first century.

Like New Zealand artist (and Australian resident), Euan MacLeod, whose boat motifs preoccupy his work, Paul Judd explores some of the same territory but with more whimsy, a tighter palette with wider reference points and a wider range of styles. Not so well known as his compatriot, Judd deserves to be, and this exhibition will hopefully go some way to creating that for his work.