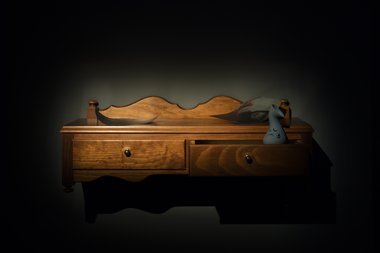 With Bazin being a postwar film theorist, I don't think Kennedy expects his audience to follow the intricacies of the original argument too closely. Sixty years after Bazin's death critics are still arguing about the details of his discussion, and if you look at this show, three of the four artists employ moving image and the other uses drawing and performance - so film is not an exclusive preoccupation.

The strange title of this exhibition - organised by Andrew Kennedy, Te Tuhi’s exhibition space designer - comes from a piece of writing by the legendary French film theoretician Andre Bazin (1918 - 1958) in an 1945 essay where he tried to establish the intrinsic differences between photography and painting as distinct art forms. Bazin believed photography was superior to painting because it was more objective, and in its processes of achieving realistic likenesses embodied correlational or indexical properties he described as like a fingerprint. He thought art’s drive to create sculptural substitutes for the human body came from the desire for immortal life via substituted replicas, as evidenced by the ancient Egyptians, and that photography (as a process that was what he considered to be ‘automatic’) satisfied “our appetite for illusion by a mechanical reproduction in the making of which man plays no part.”

Most philosophers, I suspect, would think that Bazin is mistaken in his claims about realism, but what is interesting here is Kennedy’s use of this seemingly dated concept to bind together four very different artists. I think it revolves around the notions of mediation and correlation. What comes between something that exists in the world (and is chosen as subject matter), and the representation (via an image) an artist makes of it. An inevitable intervention, rather than a replica or duplication.

With Bazin being a postwar film theorist, I don’t think Kennedy expects his audience to follow the intricacies of the original argument too closely. Sixty years after Bazin’s death critics are still arguing about the details of his discussion, and if you look at this show, three of the four artists employ moving image and the other uses drawing and performance - so film is not an exclusive preoccupation.

The long undulating vases feature in Songsataya’s nearby animated video as three chattering personalities that jump around and sing on a shelf in an androgynous golden-haired boy’s boudoir where the big-blue-eyed owner keeps his assortment of framed mirrors and Disneyesque drawings. Though the title Bronies, references adult fans of My Little Pony, the pots look more designed by Dr. Seuss and rendered by Pixar. There is an eerie celebration of fetishism in Songsataya‘s images that are highly tactile, especially when the boy’s rustling long hair turns into a whirling, prancing, then crouching dog.

The relationship of Songsataya’s work to Kennedy’s title seems to lie in the artist’s drawings of the vases that form the basis for the digital animation and the 3D prints used for the installation: the transmutation via technology from a few curved flat lines to a palpable sculpture.

One of the framed drawings in the video features Magritte’s The Lovers (1928), an image of a couple kissing with sacks placed over their heads. The denial of sight but heightening of tactility plays a key role in Dorota Broda‘s contribution.

Broda presents a programme where, organised in pairs and blindfolded, visitors are encouraged to draw each other by feeling the other person’s head and face with one hand, and drawing via their fingers - using thin paint on paper - with the other. The aim is not to use guesswork or memory (though that is unrealistic) but to decipher information gained from the ‘feeling’ hand and translate it into a descriptive communicative drawing via the other. The results are a wide range of streaky and dribbly, complete and incomplete visages, on several walls, while the title comes from a Raymond Carver short story where a blind man tries to understand what a cathedral is by holding the hand of someboy who is drawing one.

Rosebud, James Richards‘ gorgeous fifteen minute black and white video, is structured like a collage with various juxtaposed (but unanticipated) elements. One variety consists of images of sexually explicit art books in a Japanese library where glossy photographs on pages have been sandpapered by a censor in order to remove depictions of genitals; another is of a tethered budgie being released from a hand and strobe-projected, another is of unusual underwater shots of a river taken when the camera passes downward through the surface tension skin; another section is a stalk of Elderflower being used to lovingly caress various intimate body parts: all mingled with an inventive audiotrack of treated voices and background noise.

There are two forms of mediation here. One is the censor ‘cleaning’ up the image with his violent subtraction, making disturbing images that dominate Richards‘ film - for the torn and striated skin of the paper seems to parallel violence to real people. The other is the artist recontextualising those mutilated images via his assortment of blended montage, placing new material around them. Richards‘ film is startlingly haunting and memorable, the highlight of this exhibition with its beautiful range of tones and surreal juxtapositions. The title seems to refer to Orson Welles’ film Citizen Kane, where the dying industrialist remembers a childhood sled he was playing on when he was snatched away from his home and his mother.

The final work, a film by Mathieu Kleyebe Abonnenc that is part of a much larger project, was sparked off by the filmmaker’s anger with the creators of a full feature Italian film in the mid-sixties about Africa, called Africa Addio. He subtly roasts the directors Gualtiero Jacopetti and Franco Prosperi for their Eurocentric racism and arrogant sensationalism by taking their film’s theme of ‘African savagery’ and re-examining some of its content that focuses on the civil wars - involving mercenary armies - in the Congo. Abonnenc references the Belgian looting of Katanga crosses, a centuries old form of cast copper currency, in order to smelt them down in Belgium. He films Yorkshiremen sawing these crosses up and turning them into ingots in a brass foundry in Sheffield, and for a soundtrack he uses two young English boys reading accounts of the horrific fighting and methodical murder.

We see a couple of forms of mediation here. We don’t have the post-colonial history of the continent of Africa, as interpreted by the Italian film producers in order to fashion what they saw as barbaric ‘truth’, but we have Abonnenc’s fury at that film which produced his ‘more accurate’ recontextualised foundry translation, plus we see how the physical objects themselves are remoulded to hide their bloody history so they become reconfigured to become bland commodities.

This is a very interesting exhibition. The Richards and Songsataya works in particular are fantastic - really engrossing. Treats that effortlessly reward a trip to Pakuranga.