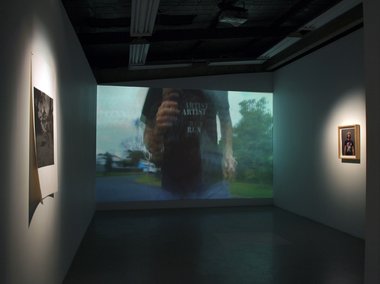 Kerr chides the elite, the market, the canon, and above all, the dealer, but his tact is always playful and light, with a high dose of self‐mockery. He ridicules by being ridiculous, combats slicked back with slap stick, embodies unlikely heroes like Forrest and Bill. Ultimately he gets us to laugh with him by making us laughing at him.

55 Sydenham Road is an unassuming little gallery located on the first floor of a dingy shared office block in the industrial heart of Marrickville, Sydney. For all its frugal simplicity, it might just be the best artist-run space in town. Here, Sean Kerr presents five works in five mediums: video, photo, performance object, print and audio. In content it runs in contrast to the sprawling scope of his recent ARTSPACE/Gus Fisher and New Dowse exhibitions (there are no Friends, no digits, gadgets nor sensors). However the familiar piss‐take sentiment is rife.

A full wall projection dominates the 5 x 5m room. A looped video depicts a close up of a ceaseless runner (the artist) chasing a backtracking camera around an unmistakably Kiwi cul‐de‐sac. His t‐shirt reads “Artist Run”. This little pun ‐ an artist running in an artist‐run space ‐ comes with an amusing sense of self‐flagellation: Kerr positing himself in his own futile Sisyphusian task - (perhaps the fate of all artists) in the spirit of New Zealand’s own Forest Gump.

What might he be running away from? The punch line awaits in the adjacent photograph: a self‐portrait in which the artist, looking astonishingly like a young Bill Gates, stares obliviously into the abyss. The line on this late 80’s psychedelic t‐shirt reads “Death to the Dealer”. While politely poking his tongue out at the world of high end dealer galleries, perhaps Kerr is also tipping his hat to such project or artist‐run spaces that, with less commercial incentives, offer greater artistic freedoms.

This pairing of works is typical of the dorky humour that makes Kerr’s work so easy to smile with. He chides the elite, the market, the canon, and above all, the dealer, but his tact is always playful and light, with a high dose of self‐mockery. He ridicules by being ridiculous, combats slicked back with slap stick, embodies unlikely heroes like Forrest and Bill. Ultimately he gets us to laugh with him by making us laughing at him.

The other pairing of works finds Nauman in his cross hairs: a metal bucket with a half-full water bottle (material from a previous performance) is positioned near a silver print depicting the artist levitating. While Nauman failed to levitate, Kerr is doing it in his backyard. In contrast to Nauman’s Self Portrait as a Fountain, Kerr is pissing in a bucket - no hands. Though this may read like smug art‐historical scoffing, there is no cynicism, arrogance or self‐importance felt here - instead it feels dry and silly (though it helps to know of the bucket’s history).

Suddenly a cacophonous burst of (what sounds like) metal equipment crashing and shouts of “Shit, Fuck Shit!!” erupts in the gallery. We discover it is a hidden audio recording of Kerr ‘making a mess of a cupboard’. This sensory overload has the potential to distract from other works and overcook the show, but one gets the idea that this is Kerr’s point, that cocking up is something he likes the sound of. His installations are often akin to a laboratory of failed experiments ‐ ad hoc, unfinished and unpolished contraptions miraculously clinging together with some number 8. The audio work brings that sentiment of failure into the mix and the intermittent clanging soon becomes another element to chuckle with.

For such a small gallery, Kerr has packed in a varied show, but the ‘pairing’ of works gives it cohesion. It is the clever multi‐layering of meaning and reference that makes them stick with you. His practice is in a sense democratic, for the people - fun for kids, entertaining for adults, a gas for art folk. Though I do wonder if this is tailored for a unique breed of dry Kiwi humour; we can only hope the locals get it. 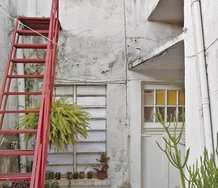 Kate Newby
I feel like a truck on a wet highway