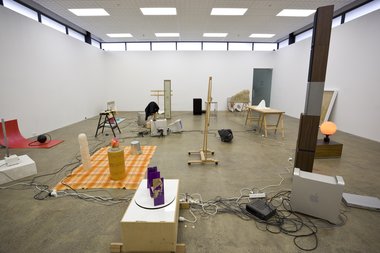 Most of Kerr's work is about humour, but not about language (except when it's describing sound). Slapstick gags dominate - not complex witticisms - with many Freudian visual puns exploiting morphological ambiguity. Fingers might be cocks but they could also be turds. Agitated white sheets can be leering phantoms or twangy erections. Noses become volcanoes or funnels or ghosts or pimples or piles of excrement.

With two Auckland art institutions simultaneously presenting the same artist’s work we have here a very unusual situation - especially with that artist being a New Zealander. The only precedent I know of is that of the Swiss video maker Roman Signer (ARTSPACE and St. Paul St).

So is Kerr’s work that revered that he deserves this double gallery accolade? I doubt it. He’s a nice man, incredibly knowledgeable about electronics and probably an excellent teacher, but not an earth shattering practitioner. He is a good artist, sometimes very good artist - but rarely great. With some artists everything they touch takes your breath away. (Daniel Crooks for example.) He is not one of those.

In case I seem overly dismissive, let me say there are some wonderful projects here, works I have returned to several times, installations enclosed in their own spaces. Especially absorbing are Stacker in the large Gus Fisher gallery, and Arcades in the small gallery at ARTSPACE. Both are highly sculptural and feature ‘musical’ sound.

Stacker has a tizzy-sounding oscillating hum that migrates from speaker to speaker during the exhibition - within a 50-60 cabinet stack. Moving your body between the ends of the high wall of speakers and advancing from left to right raises the pitch. The sound patterns seem to vary daily. On some occasions vague melodies appear with more strident pulsing.

In Arcade a group of five plywood video machines - each with an inset monitor on which appears shifting stacks of coloured rectangles, and a glowing horizontal light panel at their top - play a rudimentary three note tune, each performing console seemingly randomly chosen. The movement of sound around the room is unpredictable and you start to link certain notes with particular colours, but there is no consistently detectable logic. The pedestrian and elemental nature of the tune, with its shifting aural sources and occasional changes in octave, keeps the experience amusing, a sort of moronic cybernetic baiting of the visitor.

Most of Kerr’s work is like this, being about humour, but not about language (except when it’s describing sound). Slapstick gags dominate - not complex verbal witticisms - with many Freudian visual puns exploiting morphological ambiguity. Fingers might be cocks or butt plugs but they could also be turds or gun nozzles. Agitated white sheets can be leering phantoms or twangy erections. Noses become volcanoes or funnels or ghosts or pimples or piles of runny excrement.

Most of these are in the small gallery at the Gus Fisher - and as diminutive models on a large plywood trestle look like either working studies for bigger sculpture, or Ronnie van Hout rejects. Quite a few would be much better enlarged and just need more work.

Of the bigger sculptures (not installations) that crowd the main ARTSPACE gallery, many need some Parekowhai-style slickness. They are too ‘throw-away.’ The memorable ones present noisy gags ranging from soft farts and trickling urine to manically rattling cupboards and clanging buckets. Some of it is phallic art riffing off phallic art, such as a shaking metal ruler becoming Len Lye’s Blade, or a vertical stack of loudly counting speakers becoming Brancusi’s Endless Column.

My thoughts on all this are ambivalent. I admire Kerr’s unrelenting penchant for the scatological (it’s refreshing within New Zealand’s generally timid artworld climate) and his refusal to grow up. However most highly attractive (but stupidly obvious) body jokes need isolation to succeed, or a prepared setting. They self-negate if lost in a cacophonous dim of similar vulgarity. Each smutty stunt requires an appropriate contextual foil to make the shock comedic, some contrasting, dignified, aristocratic gentility for a backdrop - not more of the same.

We see this in the best work of the exhibition, a giant erectile pink finger which as it inflates, peeks around at you from a corridor attached to the Gus Fisher inner courtyard. Its bobbling, highly ambiguous ‘nail/eye/helmet’ reacts deliciously against the ornate dome of the space in a way that the other sculpture Kerr has positioned nearby, an inverted, skeletal and geometric mountain, doesn’t. The fluoro colour ensures it dominates. It has no competition.