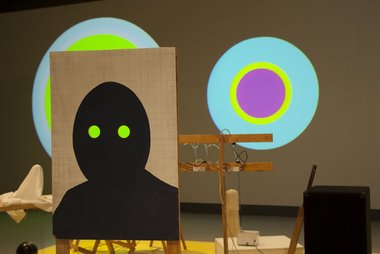 Ideas pop out in Kerr's work like kernels of corn popping, disruptive but light. Everything seems in the process of being turned or propped up. His concentric rings and speaker woofers are echoed in the sounds his works make, and in the meanings they accumulate - like a stone causing ripples in water.

I found John Hurrell’s 2010 review of Sean Kerr’s exhibition (held both at Artspace and Gus Fisher in Auckland) informative but rather contradictory. He tells us there are “some wonderful projects there” but struggles to find import in Kerr’s “smutty stunts”. Hurrell even admits at one point that his thoughts are ambivalent.

As a fellow reviewer, often engaged in similar tussles with art I could empathise. I appreciated the honesty and generosity shown. Yet I also wondered whether Hurrell’s perplexity was ultimately a sign that the art was still doing its work - that the gears were still whirring around in the critic’s head.

Kerr’s work pushes and pulls you in contradictory ways, using a complex arsenal of base and popular communication techniques. You can even take this exhibition’s title as an expression of this. Fully digested - I argue, having seen the second iteration of this exhibition at the Dowse - Kerr’s work is often as fresh, strong and relevant as one could hope any art to be. Initially facile, unfinished and provisional in appearance (reminiscent of sculptor Paul Dibble’s comment to me once that “New Zealand is just one big camping ground, really, isn’t it?”), it gets under my skin in its twiddling with the circuitry boards, machinery and basic building materials that dominate our living environment.

A few factors may not have helped in Auckland. I fail to see from the Eyecontact documentation what being stretched over two different galleries contributed (caveat: I didn’t see the exhibition). It divides attention and heightens expectations of Kerr’s importance, making for confusing judgements like Hurrell’s of Kerr as a “good artist, sometimes very good artist - but rarely great”. (Very good in my book (even without italicization) means great. And, unlike Hurrell, I don’t know of any artists who “everything they touch takes your breath away.”)

I find it hard to suppress a yawn when I see yet another informal scattersticks arrangement of work in the ARTSPACE main room (again from documentation). It’s become the contemporary exhibition design default.

For the Dowse installation four large sculptures are given their own space and the rest work in concert with each other in one room - instruments in an orchestra playing Kerr’s composition. A whole table of small works has disappeared entirely. The smaller items here form a community in which each plays an active role. They foreground the video Pop Dots on the wall behind them, the figurative playing off the abstract, unified by Kerr’s sound score.

You get the impression Kerr gained a lot from experiencing his work playing in concert in Auckland over a nice long exhibition run, and then relished the chance to restage and rearrange it. He gets his unruly, raggle taggle mob working tight as an ensemble. Certainly they didn’t “self-negate” each other at the Dowse and get “lost in a cacophonous dim of similar vulgarity”, to quote Hurrell.

Here encountering Kerr’s arrangements of half-sculpted objects (reminiscent of the school woodwork class) on sawhorses and machine-driven magic tricks with assemblages of found objects, is like entering some suburban garage turned into a fun fair haunted house.

They are arranged, carousel-like on a raised stage in the middle of the room. They operate alternately and unpredictably, inconsistent with our movement as spectators in the space. Yet the presence of a camera looking out at us, projections running across your field of passage, and numerous flashing, popping, rustling, rumbling and mumbling, makes you feel like you’re in some live forcefield ringing the work. Is human or machine in control of the experience? My youngest child was completely spooked, my elder children entranced.

Childlike and jokey in their deconstruction of slapstick and other humorous pratfalls they may be (the vaudeville ‘ba-dum-bum-CHING’ of drum roll and cymbal after a punchline echoes in my head), yet like great jokes they can rub you up for days in disturbing ways.

Like its title, the exhibition is ever playful and maddening, twiddling with the structure of different cultural languages. I end up captivated by the work’s inconsistent, impractical open-ended gestures. The way it leaves the wiring of basic human communication hanging midair. The word ‘art’ is spoken and lit up in neon, but then repeated as ‘fart’. Yet the ‘f’ mangled visually and audibly is more like a musical treble clef.

Kerr’s work runs so firmly against the seamless, polite behaviour we expect usually from our machines, that they start to speak powerfully on how sucked in we are as consumers and users by both technology and design. Their power is constantly undercut by their behaviour - human in its frailty and propensity for banality.

This week a friend remarked that they were feeling like a lab rat, citing the Psychology 101 observation that it is neither constant food nor a lack of food that gets rats to push a bar to make a test tube release it. It’s the intermittent, inconsistent availability of food that makes them come back for more, again and again. Kerr’s work plays off this addictive tendency in humans too.

Ideas pop out in Kerr’s work like kernels of corn popping, disruptive but light. Everything seems in the process of being turned or propped up. His concentric rings and speaker woofers are echoed in the sounds his works make, and in the meanings they accumulate - like a stone causing ripples in water.

He reacts against the monumental and heavy (constantly making light with his forms of art historical icons), but that doesn’t make his work in concert any less satisfying than the weighty bronze gesture (which can often be accused of unearned gravitas). His giant inflatable finger, deflating on approach, is a beautiful encapsulation of what his work does best - entertaining us with a dismantled situation comedy, but which then in activation makes us question the composition of the technological and cultural signs and actions we live by.

With Hurrell’s review I also wonder whether a generation gap is in effect. Kerr and I are of an age where the teenage hangout was the ‘80s spacey parlour and the toy de jour the ZX Spectrum home computer, with their basic armory of sounds and block games. This, together with the shadow of kinetic sculpture and new media work of the 1970s, feels like part of the DNA of the work. It’s as if Kerr is playing at divining with his screwdriver the ghost in the modernist machine.

It doesn’t all work for me. Sizeable work, Arcade for example is beautifully made but empty of import or mystery for me. Considered alone the ‘Pop Dots’ bore me.

I used to think the same of Stacker, Kerr’s attractive wall of speakers (riffing off the expression ‘wall of sound’), when I lived with it, working at City Gallery during Prospect 2001 - smart but vacant. Now I find its sound responses to my movement (nicely described by Hurrell in his review) far more involving, and musical.

Has the work changed or have I changed? Did I just encounter it at the right time on the right day? Probably, all of the above. Art in this way is always kinetic, ever moving. Like this exhibition it always deserves a second chance - just as long as it made you want to return to it in the first place.