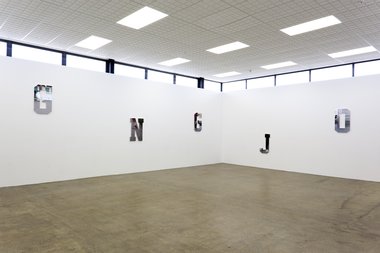 Tobias Kaspar's installation in the large room consists of seven large seriffed letters within the contours of which are images of joggers doing their thing. The gerund ‘jogging' is misspelt reading clockwise as ‘jogigng', but not with the letters evenly spaced. The arrangement is deliberately lopsided, a lurching centripetal composition, as if the slightly clunky and heavy letters are sliding around horizontally.

Test Transmission is a clever title because as it is Caterina Riva’s first curated exhibition at ARTSPACE since she took over as Director, it is an introduction for us to her taste and interests, a test indicator as sample (shall we say) to what she might have planned for the future. And it is also a test for her - as risk. As she (I assume it is her) words it in the exhibition flyer: ‘the choice of these pieces responds to fragments of a new life, in a new place, following new visual and social stimuli.’

Transmission of course refers to broadcasting and the key ingredient in this set of extremely varied exhibitions is provided by the Canadian group General Idea (AA Bronson, Felix Partz, Jorge Zontal) a pioneer artist collective that adventurously in the late seventies explored public media (such as television or magazine publishing) as a basis for their practice.

In the long narrow room we find Test Tube. (See its first five minutes here) It’s a series of brief television shows (produced by De Appel in Amsterdam) presented in a Colour Bar Lounge set where the formats of talk shows, soap operas and commercials are mixed, blending insightful banter and appallingly corny jokes into a carefully scripted discussion about pop culture and consumerism. As the punning title indicates it references chemical experiments in a laboratory, but as a way of attacking the bland uniformity of television that occurs despite the abundance of stations. (Here is an interview with AA Bronson.)

Tobias Kaspar’s installation in the large room consists of seven large seriffed letters within the contours of which are images of joggers doing their thing. The gerund ‘jogging’ is misspelt reading clockwise as ‘jogigng’, but not with the letters evenly spaced. The arrangement is deliberately lopsided, a lurching centripetal composition, as if the slightly clunky and heavy letters are sliding around horizontally.

Kaspar’s project seems motivated as a critique of the bourgoise lifestyle, perhaps the self-preoccupation that goes with long periods of regular exercise. An earlier work Lumpy Blue Sweater sarcastically berates a fashionista for their preoccupation with what he sees as trivia, quoting in its booklet a bragging speech by the character Miranda Priestly in the film The Devil Wears Prada. As a parallel he now in ARTSPACE is metaphorically disrupting any jogger complacency, their possible inclinations for superiority.

The nine drawings by Patricia Dauder have a different mood, looking at nature more than culture. Four are sumptuous red and green watercolours based on horizontal strata referencing the movement of waves on a beach. (Coincidentally these are very similar to various working studies made in the eighties for wall reliefs by Don Peebles in Christchurch.) Others are leaf shaped contours on tracing paper placed over perspectival drawings of buidings and traffic in a city, waves in cross-section, dense graphite planes with tiny black circles hidden in their midst, or the moonlike compound eye of a fly. Vision is obviously a serious preoccupation, for the leaf shape seems to contain multiple aspects of one locus, of different angles - all simultaneously opening out like an expanding cone.

Dauder has made a number of films of surfers interacting with descending bands of water for scrutinising the water’s motion seems to drive her gorgeous paintings on paper. In some ways her work is more connected to the installation of Jack Hadley’s quirky meditation video in the laddered room next to the Film Archives than the rest of this ARTSPACE show - especially as he shows papier mache props used in his video loop. Here although Dauder’s films are not present in the room, they are referred to in Arron Santry’s very interesting, beautifully written hand-out, so viewers do know about their connection to the paintings.

Riva seems to be exploiting this confusion, playing on an ‘in-between-ness’ where Dauder is both half in and half out and Hadley the same with his satelitte show. Testing ideas with film and props for transmission to watercolour or video; searching for discoveries by filtering forms through other media.