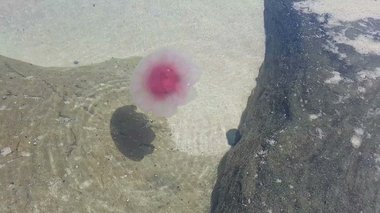 On the end wall of the Brown Room, Batchelor's short coloured video loop of an undulating delicately pink jellyfish briefly flipping over onto its back, is remarkable for showing us a set of architecturally gridded forms that seem to be gills, little tower blocks underneath a wobbly quivering saucer.

Jellyfish and seaweed are unusual subjects for an exhibition in the heart of Auckland to dwell on, but the show’s title is conspicuously tidal, and the two artists, muka weaver/sculptor/installation artist Maureen Lander and video artist/photographer Denise Batchelor, have often separately referenced the sea.

Lander presents suspended fluthers of jellyfish in all three rooms, made from bubble (or flat translucent) plastic, commercial dye and harakeke. The two main rooms feature two varieties of gelatinous creature with different types of ‘umbrellas’ and harakeke configurations, each fluther aligned along its own diagonal vector (corner to corner) in the space.

The use of bubble plastic by Lander is witty, not only because it is a critique of plastic pollution in our oceans, and the increase in some oceans of jellyfish numbers apparently due to global warming, but also because the circular bubbles could refer to the zooid (collective) nature of some jellyfish, referenced by Sorawit Songsataya in Artspace a couple of years ago.

In the shower cubicle tucked in the corner of the Brown Room the two artists collaborate. La Vie en Rose: Life in Pink, has a hanging jellyfish cleverly made from a clear plastic shower cap and haraheke, while on the floor a clear lightbox base made of cast acrylic has placed on it, dried seaweed—its leafy form illuminated by pink LEDs positioned below.

On the end wall of the Brown Room, Batchelor‘s short coloured video loop of an undulating delicately pink jellyfish briefly flipping over onto its back, is remarkable for showing us a set of architecturally gridded forms that seem to be gills, little tower blocks underneath a wobbly quivering saucer.

Also on the dark brown walls Lander and Batchelor present a waiata written out in chalk, and Batchelor a photograph of ‘fractal’ or ‘crystalline’ biota (seems to be a type of marine lichen) growing on a piece of seaweed.

The Grey Room is a little different, not only in the construction of Lander‘s jellyfish, but also with its blue ceiling, and Batchelor’s photographs and presentation of some stones joined to seaweed (usually found after storms) on a shelf.

The streetfront window displays a dramatic mound of Batchelor’s pink/purple seaweed, and naturally, a smack of Lander’s jellyfish sculptures hovering above. This is a lovely collaboration—modest, cohesive and simple—but incredibly informative (great wee catalogue with jellyfish recipe), inventive and pleasurable.