The Arts and Free Diving In Dialogue 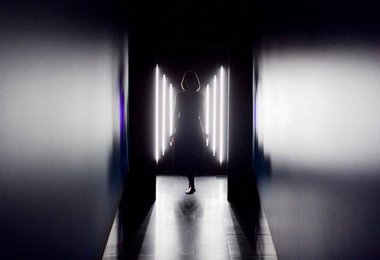 The exhibition wove a connection between body and mind, exploring pathways to overcome what seem unnatural in both professional sport and in performance art. The state of mind and the waking meditative state, repetition, trance and ritual belong to a mindfulness, which allows performers to push boundaries for both athletes and artists. Both stimulation and sensory deprivation was explored; the psychological boundaries created.

You see, my purpose of performance art is to stage certain difficulties and stage the primordial fear of pain, of dying, all of which we have in our lives, and then stage them in front of an audience and go through them and tell the audience, ‘I’m your mirror; if I can do this in my life, you can do it in yours.’ Marina Abramovic

On the edge of the Waitemata Harbour sits Silo 6, a fitting venue for the collusion of artist and endurance sportsperson in dEEP ANATOMY, an exhibition that explored the interface of endurance and fear.

It was a dialogue between free diving athletes and artists working in video, photography, installation, language and performance.

dEEP ANATOMY is the second iteration in a project series by this group of 11 artists and divers working together since 2015 with Deep Anatomy, a multi disciplinary symposium on Long Island, The Bahamas. This symposium was part of the PSi#21: Fluid States, Performance of Unknowing programme, which took place across 15 locations worldwide.

Sennet is referring to cross-disciplinary dialogues and the categorisations and boundaries that have been created between disciplines i.e. the difference between performance art and performing a sport. There was a blurriness of boundaries seen in this exhibition, between roles and contexts and many examples of performance artists utilising physical activity and athletic discipline

The exhibition wove a connection between body and mind, exploring pathways to overcome what seem unnatural in both professional sport and in performance art. The state of mind and the waking meditative state, repetition, trance and ritual belong to a mindfulness, which allows performers to push boundaries for both athletes and artists. Both stimulation and sensory deprivation was explored; the psychological boundaries created. The feeling of entering an underwater world—on a single breath—and being deprived of water, control, love, and eating salt.

At the edge of the silos Christopher McElroen, Troy Hourie, Julia Watt and Andrea Goldman (Box Collective), all Brooklyn based, set the atmosphere with Static Apnea, deeply evocative work which explores feelings of loss and mortality. It was a solo interactive performance requiring the viewer to enter a container, which was dark and disorientating, the end illuminating a woman, the viewer compelled to walk toward her. Her breath was audible, rhythmic and controlled, and in a virtual shift, the blue and darkness transported the viewer to an underwater place. From behind glass, she smiled and spoke in a smooth slow voice asking questions “What does blue feel like?” “How long can you hold your breath?” “How far would you go to save someone you love?” These are boundaries we cross with peril… This work helps us to understand, through asking.

Once inside the silos the feeling of being immersed continued. The concrete floors were flooded creating a shimmering pool, the sound of dripping from a leak, the smell fresh and salty. Further on, a monitor attached to the mouth of a silo funnel played a looped video Dream, Dean’s Blue Hole, by Swiss Igor Liberti, a single take video of a free dive 40 metres into Dean’s Blue Hole, Long Island. Large slick photographs stuck directly onto the circular walls were by photographer and free diver, Daan Verhoeven. The images printed were temporary, as is the nature of performance art and the athletic act.

Continuing the theme of transience was Australian artist Mick Douglas’ performance and site-specific installation passage (circulations #0011) from the Circulation series. Held at high tide, eating sachets of salt sourced from all over the world and walking repetitively in concentric circles, the artist led us through the blue-tarp-wrapped-passages to the central area where the floor was covered in salt. The salt crunched underfoot, the light funnelled in commanded reverence, a Zen garden of blue and turquoise plastic parts scattered around the glistening crystals. This work was a continuation of a series that  focussed on salt as a metaphor for the inter-relationships of the local and the global and the endurance of the body achieved by the stillness of the mind. At the completion of the performance Douglas said, “Thank you for bearing witness with your presence”. Again the spectator was important to both the temporal nature of the performance and the athletic feat. Claire B Paris-Limouzy and Simon Maisch provided the soundtrack.

Projected around the circular walls where Douglas’ performance took place was a video by Denise Batchelor, Shallows, Dean’s Blue Hole. It affected a feeling of being submerged in tropical water, weightless and a loss of time. It was also shot in the Bahamas, Bachelor’s motivation for the work spurred by her brother who spent over 40 years free diving for paua on the Wairarapa coast. The wet floor reflected the film, while the soundtrack recorded at Dean’s Blue Hole by Denise was eerie, the sound muffled.

In the next silo, Sally J Morgan and Jess Richards, with their video In the Hollow of your hand, created a surprising intimacy in the large dominating space. Projected high on the ceiling and creating an iridescent image, it invited the viewer to recline on beanbags to listen to a narrator in the background who is speaking softly about love, and fear of drowning. The echo of space and the sound of the deep mentally immersed the viewer further under water.

In the third silo Canadian Amelia Taverner installed Castaways. in this reference to the Haiti humanitarian crisis, she adorned the space with human detritus washed onto the Long Island shoreline from the shipwreck of a relief boat—a haunting reminder of the fragility of life.

Sam Trubridge contributed a performance work Many Breaths (To Lift an Anchor From the Sea bed) documenting free divers lifting a 200 year old anchor off the seabed. Three screens hanging in a triad from chains, cleverly mirrored the giant chain links of the antique anchor. Aesthetically seductive with the streamlined form of the divers, repetitive movements created patterns that disappeared into the depths each time the physical struggle occurred to drag the anchor up.

Endurance is a strong component of performance art and sport. To learn to control and manipulate the body through the mind is the biggest endeavour. The dEEP ANATOMY project challenged our idea of endurance, and “our contemporary preoccupations with physical limitations and mental constructs such as fear and terror, recognizing the pervasive impact this has across society.” (Sam Trubridge, from the exhibition catalogue.) It helped us understand ourselves, through finding out what we are scared or capable of, and freeing us to move into the great blue beyond.