The Colonial Bonnet as War Garb 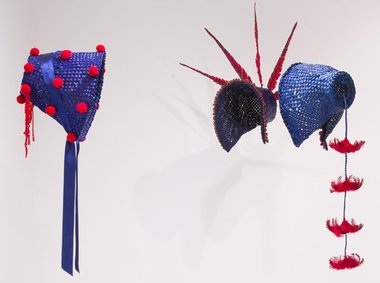 These colonial bonnets made you do a double take. Suspended, they hovered in space, like a cross between decapitated heads and Victorian haberdashery. For Māori, the head is sacred, and red is often associated with the sacred or the 'be-careful zone.' The flax bonnets appear as warning signs and as frames for ghosts of bygone times. Or they are metaphorical 'garb' for the contemporary woman (or women) of New Zealand—a female presence with connections to both our Māori and European cultural traditions.

The northern tip of Aotearoa, New Zealand is where the first British colonial settlement took place from the early 1800s onwards and it is the territory of the Ngāpuhi tribe. Ngāpuhi are in some ways an uber tribal group because there are many subtribal groups and because many descendants live in far away places and countries. So the biannual Ngāpuhi arts festival is not just a Northland event but a homecoming that ranges from conceptual artworks to traditional dance. Maureen Lander‘s installation was one of 50 or more works at the 2016 exhibition curated by Rhonda Halliday and BJ Ewen.

The installation Hariata’s War Garb consists of a long white sash woven from flax fibre and decorated with red wool ngore (pom-poms) plus three blue woven flax bonnets in 19th-century colonial style, sporting red pom-poms, sashes, ribbons and/or feathers. These colonial bonnets made you do a double take. Suspended, they hovered in space, like a cross between decapitated heads and Victorian haberdashery. For Māori, the head is sacred, and red is often associated with the sacred or the ‘be-careful zone.’ The flax bonnets appear as warning signs and as frames for ghosts of bygone times. Or they are metaphorical ‘garb’ for the contemporary woman (or women) of New Zealand—a female presence with connections to both our Māori and European cultural traditions. They are also an eerie reminder of the tattooed heads found in museums around the world which are gradually being returned to New Zealand tribes.

These suspended bonnets are piercingly elegant. The vivid reds and the intense blues shimmer, creating three dimensional compositions. The simplicity of the bright colours and juxtaposition of media (cloth ribbons, flax and feathers as sculptural elements) make the eyes dance and the mind whirl. This materiality is provocative and the conceptual implications ‘show the colours’ of a culture from multiple perspectives. The bonnets are ‘war garb’ for our New Zealand post-colonial and postmodern culture. They appropriate the female colonial head-dress like a trophy stolen from European culture or a headpiece waiting to be put on for battle.

And what is this battle? Of the sexes? Against colonialism? Or is it a reminder that the decorative—as in the animal kingdom—serves as a signifier, in this case for a female presence (he wahine toa) who is ready for the challenge, ready for life?

This work is primarily a homage to a historical figure who operated within two very different cultures. Hariata Rongo (1815-1894), was a Ngāpuhi warrior who, as the artist discovered during her two-year research project at New Zealand’s national Alexander Turnball Library in Wellington, also attended Christian services and wore a bonnet and sash in battle. The 2015 Wellington exhibition, Tell Tails, with Christine Hellyar and Jo Torr, was the result of this research.

One starting point for Lander, a Ngāpuhi descendent, was the 1846 watercolour, The Warrior Chieftains of New Zealand by Joseph Merrett. Hariata Rongo was the daughter of reknowned rangatira (leader) Hongi Hika who visited England and met King George in 1820. She was also the wife of Hone Heke who cut down the flagpost in Kororāreka (Russell) and led the northern wars with rangatira (leader) Kawiti who is also in the Merrett painting. Her mother, Turikatuku, was also a warrior and Hongi Hika’s war strategist. He never went to war without her. Hariata often left her mission school life to accompany them on war excursions. So she grew up on the cusp of change and negotiated two quite different ways of living during her lifetime.

In the 1846 Merrett painting, Hariata is standing on the left in a European skirt, but also wears a sash (woven like a Māori cloak) decorated in a geometric grid with what appear to be tiny red pom-poms, draped over her left shoulder and tied at the waist. During her research Lander drew on the manuscript letters of another of her ancestors, her Scottish great-great-grandfather J. J. Fergusson, which mentioned Hariata’s penchant for wearing a sash and bonnet, that she had a liking for red, and led 700 men into war. Both texts, as we would read them today, bear tell-tale signs of their colonial bias.

Lander has mutated this colonial perspective with her own New Zealand Māori and European heritage, to reveal the story of a remarkable woman in an uncanny work which brings to a head the contemporary significance of New Zealand’s mixed colonial and Māori perspectives. The historical Hariata made her own life and identity out of the available materials and opportunities, and perhaps that was the real purpose of her war garb: a making of her own identity out of the chances she had and the cultures she could draw on. 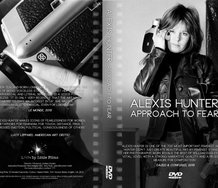 Alexis Hunter: The Feminist is in the Room