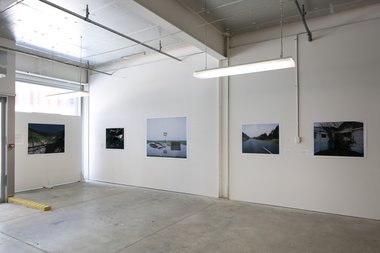 The seven large prints comprising this exhibition come from a group of more than forty derived from an ongoing project which had its origins in the photographer's initial interest in the life surrounding the major railway line between Christchurch and the West Coast, once a thriving iron highway for passengers and freight but now existing - barely - for the tourist and coal trades. However, Watkinson's focus soon settled on the end of the line, both geographically and economically, her images tracking the seemingly relentless winding down of key West Coast industries.

The West Coast of the South Island is a place of legends. The mythology forms strata as dense as the coal seams so often mined there: the mountains and scenery, the isolation, the rainfall; its poenamu, coal and forests; its mining disasters; the gold rushes with their proliferation of hotels; the towering figure of premier “King” Dick Seddon; its hardiness, hospitality and resilience; right down to the grand canvas of Eleanor Catton’s The Luminaries and the Man Booker Prize. For such a geographically restricted province with a small population everything about it seems writ large.

Its early and proportionately large component of Irish people may have brought with it a talent for story-telling as a knowing ruse to partially mask harsher realities. The mythology can be at odds with the history, however - life can be challenging there and opportunity limited. Over the past half century many such regions have been hard hit by the effects of the neoliberal agenda, the fabled “trickle-down effect” hardly felt outside the main centres. The West Coast has long depended on a range of extractive industries such as gold, coal and forestry for the maintenance of its economic life. But over that same half century these enterprises have become less viable - as much for political and environmental reasons as for economic ones. This bigger picture can be as leaden as the skies bunching up against the western side of the Southern Alps. Watkinson’s pictures aren’t pretty either - nonetheless they’re fine photographs - but it’s not a pretty situation.

She’s a recent Ilam graduate where her tutors have been Glenn Busch and Tim Veling. Busch has been a committed social documentary photographer for almost fifty years now, while Veling (also an Ilam graduate) has shown with his work since the later 2000s a sympathy for the interface between the medium and human predicaments, his imagery perhaps not as direct as Busch’s but, stitched together, his narratives have similar impact and likely longevity.

In a sense, Watkinson’s practice straddles those of the two men: her images imply a continuous narrative as do Veling’s, and are supported and illuminated by the words of her extended labelling, as have Busch’s edited interviews been integral to his series such as Working Men. While her work - on first impression - is a little more oblique, its cumulative impact is equally forceful.

The seven large prints comprising this exhibition come from a group of more than forty derived from an ongoing project which had its origins in the photographer’s initial interest in the life surrounding the major railway line between Christchurch and the West Coast, once a thriving iron highway for passengers and freight but now existing - barely - for the tourist and coal trades. However, Watkinson’s focus soon settled on the end of the line, both geographically and economically, her images tracking the seemingly relentless winding down of key West Coast industries.

A significant one was Solid Energy. A coal-mining State-Owned Enterprise with a chequered history, a child of the restructuring 1980s, it started off with a hiss and a roar but soon became mired in controversy owing to extravagant corporate spending and unwise commercial decisions which lead to insolvency and requiring major government injections of cash. The eagle had become an albatross (1). As the government grappled with the embarrassing situation, John Key announced in February 2013 that it was “very unlikely Solid Energy would be sold in the near future.” This phrase has provided Watkinson with the title for her larger project, the implicit irony deriving from the fact that almost immediately a “rescue plan” began to be implemented which has entailed progressively selling off the company’s assets so the government might at least recover some of the money “invested” in it. Of course, the consequent effects on West Coasters have not featured conspicuously in this alleged rescue plan, although various ministers have enthusiastically echoed the hand-wringing of the region’s mayors and business leaders.

In her exhibition statement the photographer has written:

Now, in 2016, I have learnt that the “near future” is a concept the occupies the minds of all who live on the West Coast. I’m compelled to listen to people’s stories, to photograph, and then I return home with a heavy heart, the weight of narratives between my shoulder blades. This project has raised more questions than I will ever have the answers for, but I hope that the photographs I continue to make could inspire in people a sense of awareness in their surroundings, and an interest in the political landscape and economy of an isolated part of the country.

Watkinson has roamed the territory of the voiceless, her camera recording the effected sites which collectively, via her skill and sensitivity, speak with a voice of their own - amounting to a bleak condemnation of policies which seem oblivious to their human impacts.

Her project began with the main railway, and one of the images in the show depicts it on the Canterbury side of what West Coasters call, with typical understatement, “The Hill” aka the Southern Alps. Waimakariri Gorge, from the Midland Line 2015 has been taken from the Coast-bound train as it passes over one of the many viaducts crossing the upper reaches of this major river, so both train and bridge appear as a dark shadow staining the late afternoon hills - suggesting both the colour of its next cargo and the future of the province whence it comes (2).

This harbinger of a dark future also surfaces in Coal store, Holcim Cement Plant, Cape Foulwind 2016. After being in operation for 58 years the cement plant closed in June this year, causing 120 job losses, a ripple effect being the closure of its supply mine, the Escarpment, causing the loss of a further 21 jobs. These are significant numbers for a small population.

Watkinson’s focus is not just on the present and future though. She’s keenly aware of how history is the warp and weft of the lives of the Coasters, and she pays a kind of tribute to this in her Joseph Divis’s House, Waiuta 2016. Czech-born - in 1885 - Divis came to this country in 1909, spending his life as a miner at Blackball. He retired to the now ghost-town of Waiuta, and after his death in 1967 a trove of glass negatives was recovered from this house; in his later life he had assiduously recorded the town, its events and the nearby mine.

Watkinson continues this recording, the absences rather than the presences, and three of the images in Elsewhere testify to the power of this approach. The bleak Sections for sale, Westport 2016 illustrates the outer ripple effect of the province’s economic challenges, and her Pike River Mine gates 2015, while superficially just a pair of very ordinary gates closed on a very ordinary road, the title automatically bestows an elegaic cast all the more affecting because of that ordinariness. In the 1970s The Times of London mounted, for it, an innovative, full-page advertising campaign. The pages were solid black except for the paper’s logo at the top and five small words in a small font centrally placed: No pomp just the circumstance (3). This could be Watkinson’s motto, too.

The third image redolent of absence is Skate park or basketball court, Carters Beach, Westport 2016. Here the game’s grimly over, the thoroughly wet asphalt suggesting inundation of the playground, a prophecy perhaps of a steady encroachment of the grey sea beyond.

(1) The company’s current website, however, remains a model of corporate “positivity” where the albatross still attempts to pose as a credible eagle.

(2) 80% of the Midland Line’s traffic transports coal, so as each mine closes, the line’s viablity comes further into question.

(3) Harold Evans, the Sunday Times editor at around that time, once said “News is what someone wants to suppress: everything else is advertising.”