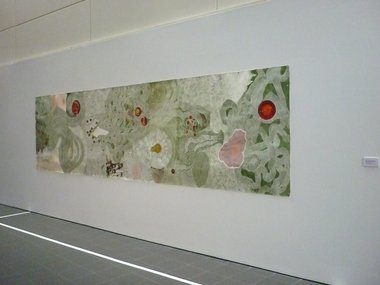 This is dream-time, but on a whole other level, without the overlay of spirit ancestors and the like. What it is is a secular address to the world, one Richard Dawkins might describe, the one we've all inherited shorn of all premodern notions of the divine. The solemnity is completely profane - the “shortfall”, one the West has constructed for itself.

Hamilton based artist, Cara Fotofili, for the last 15 years has been doing a “Gauguin”, having taken herself away from the “corruptions’ of western civilization and lived on a remote Pacific island, without electricity and other comforts of home.

She is back now, after her total immersion in unspoiled paradise, and has produced some large mural size paintings that reveal something of her sojourn and encounter with the “primitive” - where things are stripped back to elements that reside at the core.
These “aboriginal” paintings - watercolours - capture the character of that word both in a primordial sense and with a more literal denotation.

They are almost entirely made up of dots, white ones that stream across her canvas (huge sheets of paper - 1400 x 5000 mm) to create a world that hovers somewhere between pure abstraction and ethereal biomorphic forms. The latter take on the shapes of tendrils, rhizomes and roots that weave and interlock their way across her muted washed ground - sometimes blue, sometimes green.
At times one is reminded of artists like Emily Kame Kngwarreye in the lines and dots that reference organic shapes, or again Brice Marden and Terry Winters, However Fotofili has made the dots her own here, as they uniquely create both marine worlds that bubble and ooze in wavelike formations (pregnant with life and giant spermatozoa shapes), or alternatively, cosmic constructions; stars and planets in large circular washes, floating in a maelstrom of pointillist dabs, flecks and speckled points of light.

Just so one doesn’t get too worked up about some modernist abstract theories that resonate with the search for spiritual absolutes and going after invisible realities, Fotofili provides titles that help deflate such expectations. These are not works about Where have we come from? and Where are we going? Titles like Experiencing a Significant Shortfall of Gravitas and CH2OH (CHOH)4, CHO undercut any sublime connotations.

And yet the dimensions the artist has chosen to work in, Pollock or Newman-size, do allude to that oeuvre - the grand statement, the heroic scale, taking on Michelangelo and all the high seriousness associated with the mythological and transcendent subject.
Do these works then represent a sort of South Pacific modern metaphysical question mark, despite the cheeky self-deprecating titles?
They do engage with the micro and macro worlds - the sea and primordial beginnings; the stars and cosmic architecture. But for all that, this universe eschews any hint of redemptive spiritual overtones other than the ones anyone might inadvertently bring to the table, staring at images suggestive of an “infinite.”

This is dream-time, but on a whole other level, without the overlay of spirit ancestors and the like. What it is is a secular address to the world, one Richard Dawkins might describe, the one we’ve all inherited shorn of all premodern notions of the divine. The solemnity is completely profane - the “shortfall,” one the West has constructed for itself.

Fotofili’s own methods of construction do however follow a kind of automatist proclivity like that favoured by the abstract expressionists who harboured notions of the canvas as being an arena of psychic struggle. Here though, the artist engages less with an internal soulful battle and more with a simple submission to the chance dictates of the medium - and quirky accidents that come from experimentation as the painting organically grows.

In this regard, her method involves painting on the studio floor, but since the space cannot accommodate 5 metre paper scrolls, she can only work on a small section at a time. In a sense therefore, she is flying blind in the creative process. This perhaps lends itself to the title of the show - Small Changes.