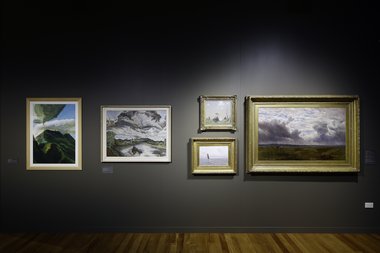 Skies have a long and complex history in Western art. Until the 18th century they were pretty much associated with and in the service of notions of the heavenly. Pre-Giotto, any representations were totally symbolic, clunky strips of grey in place only to support a cast of divine characters, and although in terms of realism images of clouds came a long way over the following four to five hundred years, their function remained as airy seating for heavenly creatures.

Themed shows from the permanent collections of public galleries have become a feature of their progammes over the past two decades: the Govett-Brewster’s big Drive show in early 2000—anything with four wheels seemed to qualify—Pataka’s bird show of 2005, and the Christchurch Art Gallery’s Hair Story exhibition of last year readily come to mind. Hair, while including many fascinating images, was so closely-hung it could’ve been described as, well, “cheek by jowl”. Most of these exhibitions are enlivened by various loans, and it’s rare that the content comes completely from the respective galleries’ own collections.

Such shows are understandably popular—lacking any heavy or misguided conceptual base to intimidate and/or bewilder gallery visitors—and quite often juxtapositions within these shows stimulate fresh and sometimes entertaining reconsiderations of the images involved. For instance, pairing Rita Angus’s iconic Cass with Julian Dashper’s later riffs on the site showed just what a sharply imaginative artist he could be.

The 99 year-old Sarjeant Gallery has approximately 8,500 works in its collection, and its staff occasionally assemble small-but-perfectly-formed shows on a simple theme revealing the richness and diversity of its holdings. During the recent project to raise the $34M required to quake-proof the existing heritage building and construct a much-needed extension to the rear, the collection was often described as “nationally significant”, and exhibitions such as Clouds reveal this to be something more than useful hyperbole.

Borderline corniness is always a risk with such shows, but, deftly handled, they can be as revelatory as the pleasure they can so casually give. Curatorial ambition is one thing, but public pleasure is quite another, the latter too often the hapless victim of the former.

The Sarjeant’s temporary site (Sarjeant on the Quay) is a revamped two-storied 19th century building on the edge of the CBD and the galleries consist of one large space which can be reconfigured by screens, and a smaller, more intimate and coherent space measuring about 10.5 x 7.5M, which is where Clouds presents itself.

Skies have a long and complex history in Western art. Until the 18th century they were pretty much associated with and in the service of notions of the heavenly. Pre-Giotto, any representations were totally symbolic, clunky strips of grey in place only to support a cast of divine characters, and although in terms of realism images of clouds came a long way over the following four to five hundred years, their function remained as airy seating for heavenly creatures; the apogee, perhaps, being Tiepolo’s ceilings at the Wurzburg Residenz in the early 1750s.

Parallel to these developments, though, was an ever-expanding proto-scientific interest in the natural world from about the 12th century—early book illumination is full of such carefully-observed details—and while their depiction was driven largely for symbolic purposes, they revealed a growing delight in purely earthly matters. Painting a lily ‘accurately’ is one thing, but attempting to capture the ever-shifting nuances of shape and light that clouds consist of posed a problem not really solved until clouds themselves became the dominating subject of the imagery.

Geography has its place in art history too. Over the 16th and 17th centuries when landscape painting gradually emerged from its early function as background to religious tableaux and became a genre in its own right, artists in rather featureless regions such as Holland raised their eyes to the skies for sufficient subject matter, thus beginning a Golden Age of Dutch painting. Across the channel the more temperamental island climate of Britain produced even more fleeting cloudscapes, and during the 18th and 19th centuries—when observation itself had scientific cachet—artists such as Girtin, Cox and Cotman depicted the elusive details of shape and light in their nuanced watercolours.

The hero of this observing tradition is, of course, John Constable. Not for him the sometimes melodramatic meteorology of the Continental sturm und drang movement; no, the adjective most justly applied to his approach is ‘natural’, which for him meant Nature in repose. While it’s easy to admire his large ‘finished’ paintings, it’s hard not to love the small studies he made plein air, often painted on the lids of cigar boxes. What makes these modest miracles so unforgettable is they manage to convey both the intensity of the observation and the joy of, well, being there.

Kidd’s Clouds show is chock-full of observation and joy. Of course, it’s too easy to scoff at a genre so passé as landscape, but this fundamentally ideological position might soften a little in the presence of imagery such as Andrew Ross’s transcendent photograph View from a barn, near Turakina 16/3/2009. And a pair of night-time Aberharts taken at the mouth of the Whanganui looking towards Taranaki maunga might give pause for thought too.

The show tracks the development of the landscape genre, from Francesco Trevisani’s (1) The Appearance of the Virgin to St Maurice c.1690, through 18th and 19th century examples to the 20th where most of the imagery originates, but nearly all of it owing a compositional and sublime debt to preceding centuries.

The pairing of the Gallery’s well-known Nugent Welch large oil (he was perhaps more successful generally with watercolour) The Coming Storm, c.1930, with Brent Wong’s Waves—Coast—Clouds—Sky (1976) is a stroke of genius: the former encapsulates the Picturesque landscape tradition in New Zealand in the earlier 20th century as Wong’s does the magic realism of the latter part.

There are some lovely surprises. Who knew the Sarjeant had a classic Kenneth McQueen landscape watercolour from the 1930s? This artist (1897-1960) was a significant Queensland painter, and McCawley’s Farm is a great example of his work and looks fresher than the proverbial daisy. It was purchased in 1937 by the Sarjeant’s volunteer curator, Dr Robertson. Local artist Violet Whiteman (1873-1952) is represented by a rural scene, View at Cherrybank, which formally is quite conventional, but with a colour sense any of the Bloomsbury bunch might’ve been proud of. Whiteman is paired with Marcus King (1891-1985), a largely neglected painter mostly because he was a ‘pure’ landscapist, (3) trained by Edward Fristrom, but employing a palette more in the manner of Post-impressionism.

Another local, obscure nationally, is Joe Bootham (1911-1986) (2), whose Wanganui River at Aramoho, 1972, has a visionary intensity verging on the psychedelic. It makes you wonder how much acid might’ve been available in Whanganui in the early ‘70s. This painting has a startling resemblance to Charles Burchfield’s work—a humming electricity energising the rather limited palette. Contemporary Whanganui artist Paul Rayner’s Cloudbank, July 1991 is a vivid and muscular acrylic on paper depicting not just a view up the River but conveying much of the untameable forces of nature.

John Coley (b. 1935) came to notice in the 1970s as an abstractionist, his gridded images included in most public collections, but in recent years his work has faded from view. Clouds features a terrific print from 1968 entitled Rain Rain which is a masterpiece of Pop minimalism, to say nothing of a humour rare in New Zealand art. In subsequent decades when irony reigned humour somehow lost its innocence.

Some of the exhibition’s juxtapositions are mutually informative, such as the placement of Rodney Fumpston’s Sky—Marble Arch 7, 1976, next to two of Matthew Summers’ small oils from 1998. The often laboured nature of landscape depiction here has been thrown aside for confident statement, minimal means and richly disposed colour.

For any show like this space is always at a premium, but given the paucity of female representation—five against nineteen men—it’s regretted that women such as D K Richmond, Olivia Spencer Bower and Gretchen Albrecht weren’t found a place for. Charles Butcher’s dominating work has undoubted qualities, but in terms of subject matter it’s more likely to be “about” reflections on water than about clouds. This is a very minor point though. Clouds already soars.

2. Bootham deserves a brief footnote in NZ art history. Early in 1962 his family gave shelter to the young Peter McLeavey, fresh off the bus from Wellington, and about to work at the local DIC department store where he learned retail. There’s a slightly surreal photograph of them all on p. 41 in Jill Trevelyan’s McLeavey biography.

3. Although King was well known in his day, and sold most of his work, his name doesn’t appear at all in Gordon H Brown’s three surveys covering the period 1900 to 1960, publications which otherwise are reliably comprehensive. In 2015 Potton & Burton published a large book on King’s work—Marcus King: Painting New Zealand for the World—by Peter Alsop and Warren Feeney, which may encourage further interest in this artist’s oeuvre. 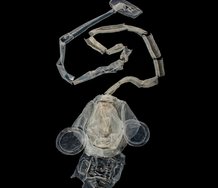