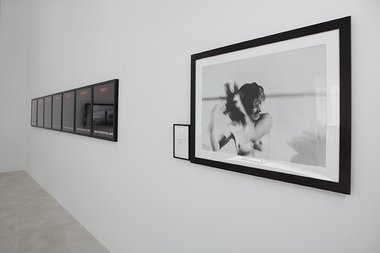 Of the contributors to RE:VISION, four or five are legendary international 'Art Stars' seldom seen in Auckland, making it a fun show to poke around in and explore new personalities. Despite this, and even though some artists are over represented - something you expect would at least provide cohesion - the whole display has a disparate piecemeal ambience, a bitsiness.

For the debut show of her new gallery (a converted classroom with spectacular ceiling - next to the Jewish synagogue) Trish Clark has selected thirty-six works (sometimes suites of items) from seventeen artists. Of these contributors, four or five are legendary international ‘Art Stars’ (eg. Turrell, Abramovic, Sugimoto) seldom seen in Auckland, making it a fun show to poke around in and explore new (for here) personalities. Despite this, and even though some artists (like Bambury and Robinson) are over represented - something you expect would at least provide cohesion - the whole display has a disparate piecemeal ambience, a bitsiness.

So, sifting through a certain amount of chaff to dig out the rare wheat, here are eight works I found particularly engrossing.

In 2002 Hiroshi Sugimoto had a wonderful show in Auckland Art Gallery of black and white photographs of wax figures portraying European historical personages. Lifelike with detailed costumes, they unnerved because of their strange clammy and smooth skin - like for example Gottfried Lindaeur’s painted portraits - a quality that is hard to identify. Now here in Clark’s space, Sugimoto‘s intricate and dramatic image of a lightning strike - very different - was part of a breathtaking installation of large shots he prepared for the 2010 Sydney Biennale in the Power House on Cockatoo Island. The concision of each quivering electrical tendril (made with an 8 x 10” large format camera) takes your breath away.

Of Sugimoto’s much earlier images, he is famous for his portraits of empty theatres with bleary white screens. Kimsooja‘s suite of five images of another empty theatre with large coloured screens owes a lot to these, so having the two artists hung in close proximity initially is confusing. Looking online, Kimsooja has two sets of very similar looking works, one a video documentation of a light and sound performance in a theatre with curved rows of seats, the other a set of photographs mounted on plexiglass taken in another theatre with straight aisles - the ones at Clark’s. These seem to be about the disruption of the documentary image via reflective surface, advancing colour on the picture plane, and pristine geometry.

Bruce Connew‘s self-critiquing photographs are like outdoor family snaps, but mischievously voyeuristic. Blurry and flattened, as if decorative prints on tissue paper, they have a lovely abstract diffuseness - low on detail, exploiting mid-tones. There are over fifty in the series of these small I Saw You works which exemplify a certain sort of dubious gaze. They seem more akin to subtly provocative watercolours or potato prints than photographs.

Leonard Emmerling first introduced Roger Ballen‘s South African work to Aucklanders at St Paul St. Gallery a few years ago. There are two works here, and while I don’t relate to his use of drawn-on props and gags - like headless figures - in one, the delicate Brassailike image in the other of mannequins taking dancing lessons with splayed, ambiguously directed feet has an enigmatic appeal. Is it one mannequin we see or two?

The largest painting (of several) by Stephen Bambury, ‘It had a cinematic effect’ (II) has two butted aluminium panels coated with white gold and then treated with chemicals - perhaps heat. The mottled, iridescently shimmering, fluid and bubbly surface acts as a foil for the strangely angled cut butted edges and painted lines that horizontally traverse the plates. They disrupt all rectangular / perpendicular expectations whilst texturally remaining fascinating.

Alfredo Jaar‘s (Hoterelike) dark suite of seven daily panels seems to allude to Adorno‘s famous comment about the impossibility of poetry being written after Auschwitz, but updated perhaps to reference atrocities in Latin America. Tonight no poetry will serve could mean ‘We will refuse to attempt to hide Man’s barbarism behind the platitudes of Culture,’ or else, ‘Poetry will not manifest itself now. It will not dignify the filthiness (morally contaminated state) of human existence with its presence.’

Shaun Gladwell‘s video shows the artist doing complicated manoeuvres with his skateboard perilously close to the edge of a concrete causeway overlooking the rocks of a churning Sydney Harbour. The sequence, with a dark storm approaching in the distance, has strong Romantic (yet amusingly unironic) connections with The Wanderer, the famous painting by Casper David Friedrich, as well as certain ‘meteorological’ works by Turner.

Anthony McCall‘s work of a seventies, nocturnal, outdoor performance shows the artist and his assistants lighting a sequence of small fires positioned over the landscape in a grid. At a certain point the kinetically rhythmic image inverts so that the dotted lines of flickering conflagrations flip to become celestial bodies (comets, meteors, asteroids?) glowing in the sky.

I’m looking forward to seeing what Trish Clark presents in the future, especially solo shows where you can look at an artist’s ideas and visual /conceptual sensibility in detail. (Group shows in general I’m personally a bit wary of, where you often have the curator attempting to be a surrogate artist, where the artists themselves are the raw materials.) It’s a tough thing to set up a dealer gallery in these fiscally difficult times (and clever she is open on Sundays). Hopefully her overseas connections will help provide a richer stimulus for Auckland/national art debate. We shall see what happens.