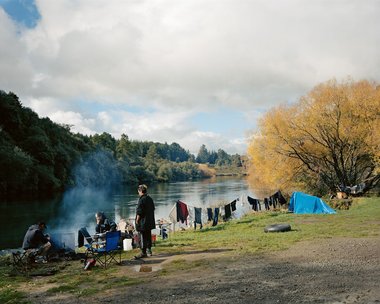 The photographs chosen are what could be labelled ‘straight' photography. There is no push to abstraction, overt manipulation or over conceptualisation. Yet - as stressed in the accompanying book's introduction - they are not ‘snapshots' or ‘documents' taken with an impartial and objective eye. The photographers ‘make' the pictures selecting with scene with intentionality, framing the image and sometimes staging its contents.

The contemporary photographer Andreas Gursky said ‘since the photographic medium has been digitalised, a fixed definition of the term “photography” has become impossible.’ This is not entirely correct, as various stylistic approaches within the confines of film have existed since photography’s invention. There is the blurred romanticism of the Pictorialists, staged ‘film’ stills of Cindy Sherman, and photojournalist images with humanist underpinnings and intent, to name a few. However, digital photography has expanded photography’s possibilities further by creating more room for manipulation post the photographic event. In more incidences than its predecessors contemporary photography sometimes feels closer to other mediums.

Recent Auckland Photography at North Art gallery was part of the Auckland Festival of Photography. Set over two gallery spaces this large exhibition is accompanied with an extensive publication, which includes an introduction by the curators Chris Corson-Scott and Edward Hanfling, forward by senior Auckland Art Gallery curator Ron Brownson, and brief essays on each photographer. Within the expanse of approaches represented in the festival the curators choose to focus on a particular style of photography. While somewhat narrow, this is necessary in order to create a survey of coherence and depth and prevent a mish-mash of styles and approaches.

The photographs chosen are what could be labelled ‘straight’ photography. There is no push to abstraction, overt manipulation or over conceptualisation. Yet - as stressed in the accompanying book’s introduction - they are not ‘snapshots’ or ‘documents’ taken with an impartial and objective eye. The photographers ‘make’ the pictures selecting with scene with intentionality, framing the image and sometimes staging its contents. All twelve photographers take photographs that are ‘scapes’ of the world around them: cityscapes; suburbanscapes; landscapes, and the details that lie within them. Some engage with identity and history while others scrutinise the present. The restriction of ‘Auckland’ is taken loosely: either photographs taken of Auckland or by Auckland photographers in international or Auckland regional locations.

Within this framework there is variation and the particular vision of each artist. Edith Amituanai photographs her family and local community with an anthropological approach resulting in images that reveal the multi-cultural nuances of Auckland suburbia. In Khin Nu and Rawa from up the Street four girls of different ethnic backgrounds play in a fenced backyard. The patchy grass, background houses, concrete driveways and parked cars are cut through by a dark shadow typical of harsh New Zealand light. Chris Corson-Scott also chooses predominantly suburban settings although the works feel more staged them Amituanai’s. Chris by a Pond, Pinehill depicts a figure sitting by a muddy pond with new suburban development in the background surrounded by gorse. The work is painstakingly balanced with the curve of the pond subtly mirroring the hillscape above it. All the details are equally compelling from the young man who turns away from us, dark forest to the right and the brightly lit houses behind him. There is an undercurrent of nature versus civilization theme in this work. While farmland in outer Auckland has been cleared for urban development, nature in its harshness still dominates. This is similar to Talia Smith’s photographs of the empty fringes of the city. Her simple compositions make nature the subject encroached by concrete or other man-made materials.

Harvey Benge delves into the details of the urbanscape with visual wit of Henri-Cartier Bresson. There is subtle humour in Auckland, August where the shadow of a skeletal tree mimics the wooden cross above it and in Pingyao, China the subjects made-up eyes and hands echoes those of the billboard behind her. Bruce Connew takes the same approach but with a snapshot vernacular. Figures are cut off at the edges the framing haphazard revealing details of urban life.

The suburban theme also appears in Haruhiko Sameshima’s photographs. Lake Hayes Estate shows new development beneath the Remarkables mountain range. The contrast of newness to the majestic natural surroundings lends a fake ambience of a movie set. This is heightened by his other work The Korean Prison, “Deer Park Heights,” Kelvin Peninsula, Queenstown where an actual movie set, a Korean prison, in front of mountains looks like a scene from Asia. Fiona Amundsen’s city photographs also lead to similar dissonance. Without inhabitants the empty public places in New Zealand are similar to those she photographs is Asia, suggesting the uniformity of globalisation. However, on a closer look unique regionally specific details, such as signwriting, are observed.

Derek Henderson’s and Ngahuia Harrison’s photographs hint at narratives by pairing scenes where the relationship is ambiguous. In Henderson’s case the narrative is non-fiction. An expat who works as a fashion photographer alongside art projects, his photographs are an effort to understand his homeland by focusing on subjects in rural New Zealand. Sometimes viewing a subject from afar that one has previously known creates greater clarity and insight. There is subtle romanticism in Kevin Simmons, Leannce Hema and Troy Burton, Reid’s Farm where three figures only identifiable by the title, have set up camp along a river amidst autumn tinged surroundings. His Great Barrier series of young people camping over summer similarly focuses on subjects who have escaped civilized life, if only momentarily.

Harrison’s works are fictional creations. Portraits of youths in a natural setting sit by photographs of what appears to be a rocky lake. Some have a low depth of field giving the sequence a feel of movie stills. Of equally ambiguous relations are Geoffrey Short’s photographs of explosions over Bethells beach paired with moody suburbanscapes focusing on the closure of Kiwi Bacon factory in Auckland. The photographs of explosions in air - which Short, who works in the film industry, orchestrated - are violently awe inspiring with engulfing detail. However, their abstract and performative nature, with little anchoring in the natural surroundings makes them a strange fit in the exhibition.

Mark Adams’s photographs engage with New Zealand’s colonial history and the imprints it leaves on the landscape. While working in both black and white and colour, his black and white prints are especially luminous with a gothic moody resonance. The overgrown cemetery in Tokatoka, Wairoa, Northland is an evocative contemplation of colonial settlers. New Zealand’s history also leads him to Hawai. In At hikiau, Kealakekua Bay, Hawaii, where Captain Cook was killed, the sea is blurred by a slow shutter speed creating a painterly aura.

As an environmental advocate Ian Macdonald’s subject is nature itself. A scene is photographed with up to 50 shots is later photostitched together to create the final image. The detail that this process allows creates a sense of overwhelming hyper-real as if the viewer is in front of the actual scene. The reverence Macdonald feels for his subject appears in the white backlit light that creeps through the foliage of his forests, as in Kauri, Puteki Forest, 2010, hints at a subtle biblical glow.

The exhibition’s vision brings to mind the photographs of Jeff Wall and the theorist and critic Michael Fried who champions Wall’s work. Fried believes an artwork must be ‘anti-theatrical’, that is self contained, the meaning not dependent on the viewers’ experience. He refers to the ‘painters of modern life’ of the 19th century, such as Manet, who rendered the inhabitants of Paris around him going about their day to day life seemingly unaware of the artist’s presence. These works, Fried says, don’t ask for the viewer’s participation but rather call for close looking, attention to detail and immersion from the viewer. Similarly, Recent Auckland Photography draws attention to the contemporary world in self- contained images. Sometimes, this veers too far towards the banal and commonplace. Yet mostly, like a modernist haiku poem, its sparse aesthetic prose rewards the viewer. 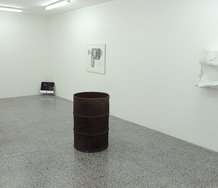 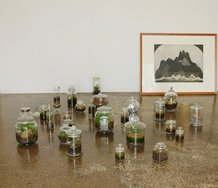 The Nature of Poetical Art

as if you were bringing back dust from the moon