As has been noted by Pablo Larios, Denny's work walks a fine line between critique of and complicity with its subject matter. I'd also suggest that 'All you need is data' raises a number of issues around appropriation, namely of access and collusion. The exhibition is in every sense fully endorsed by DLD, who not only gave Denny access to the conference proceedings' raw video and audio, but gave him access to graphic design elements as well.

Simon Denny
All you need is data: the DLD 2012 Conference REDUX rerun

Simon Denny’s All you need is data: the DLD 2012 Conference REDUX rerun exhibition at New York’s Petzel Gallery, is a reshowing of the New Zealand-born artist’s exhibition at the Kunstverein Munchen earlier this year. This original exhibition was the fruit of his residency at the Munich institution, and was shown at the same time as DLD 2013 was taking place across town.

This doubling, as well as the one-year temporal gap between the DLD conference and Denny’s refashioning of it, are as central to the project as the word ‘REDUX,’ boldly capitalised in the title, suggests. And, as a re-exhibition of a show that was itself a re-presentation of the boutique technology conference, the New York version of Denny’s exhibition immediately entails questions of relation and appropriation.

DLD stands for Digital-Life-Design and is an annual gathering of the world’s digital elite, with notable representatives from IT/Internet ventures, the sciences, as well as business and the creative industries. The 2012 conference had the theme, “All You Need Is… DATA?” and featured speakers such as Yoko Ono, 4chan founder Chris Poole, the creator of Twitter Jack Dorsey, and theoretical physicist Freeman Dyson. The event’s participants convene in Munich each year to exchange ideas between their various fields and speculate on the futures proposed by technological entrepreneurship.

Simon Denny’s recreation of this high caliber event, an environment rife with an all too common contemporary brand of naive technologistic optimism, takes the form of a meticulous reconstruction and reinterpretation of the DLD12’s entire program of events.

All You Need Is Data consists of a labyrinthine display structure that is made up of 89 billboard-like posters, which are arranged along a railing system that guides the viewer through them, and also commits them making a complete round of the gallery space.

Each poster/canvas represents each one of the three-day program’s individual events, which are rendered in the form of bubbly infographics with pull quotes from the conference speakers. See, Denny was given full access to DLD’s raw archives of the conference proceedings - an act that raises a number of questions about the relationship of the exhibition to the conference itself.

Although the exhibition is arguably less significant in its specific details than its overall conceptual architecture, there is an eerie blitheness to many of the quotes selected by Denny from the event’s proceedings. Many have an air of the truism about them - such as Chris Poole’s claim that “people don’t understand that data is the oil of the 21st century”- while others come across more euphemistically and more than a tad sinister: Stefan Olander of Nike’s remark that “big data is all about distilling massive amounts of information with insights which have massive strategic value.”

Central to the exhibition is a question of medium, which runs alongside the conference’s own concern with the organisation of information. Appropriating the idea of the timeline - which the artist has used before to great effect in shows like Channel Document - Denny injects a blunt physicality into a concept that has since been given a digital upgrade in the form of the Facebook timeline, and that is very much at odds with the overwhelmingly future-forward stance of DLD’s ideology. Part of this is undoubtedly to undermine the hubristic idea of the Internet as an abstract entity, which, as Denny notes in an interview with Hans-Ulrich Obrist, it most certainly is not - “a Google search takes as much energy as boiling a cup of tea.”(1) The clunkiness of the physical, the total inefficiency of displaying information like this, comes up hard (maybe a little too hard) against the sinister ephemerality of Big Data.

A critical frisson emerges here, where Denny’s exhibition subverts the constantly-refreshing cycles of newness that dominate digi-capitalism by opening up the recent past to interpretation. By looking back into ‘just past,’ he finds a way to “show the past in the present that was the future.”(2) The limitations of the conference’s discourse of constant optimism and ever-replenishing newness are revealed by the bathetic exposure of the once cutting-edge as now obsolete.

As has been noted by Pablo Larios, Denny’s work walks a fine line between critique of and complicity with its subject matter.(3) I’d also suggest that All you need is data raises a number of issues around appropriation, namely of access and collusion. The exhibition is in every sense fully endorsed by DLD, who not only gave Denny access to the conference proceedings’ raw video and audio, but gave him access to graphic design elements from the conference’s official branding, much of which made it into the artist’s billboard-readymades unscathed, as well. The final room of the exhibition consists of original banners featuring the conference’s logo and thanking its sponsors.

It all begs the question of what ends this extremely faithful recreation of the corporate vernacular serves, particularly when DLD themselves eagerly promote the participation of contemporary art, among other reflexivities, within their own techno-optimistic discourse. Denny blurs the boundaries between parody, critique, appropriation and documentation, in a way that Karen Archey suggests pushes against corporate alienation “by revealing the obfuscated humor within their aesthetic output.”(4) Unlike the strategies of much net art, which adopts the media of optimistic future-gazing, only to undermine this optimism through the injection of disruptive social currents, Denny is not interested in ‘co-opting’ certain mediums. Rather, he focuses his attention on the networks that generate these media, not to misuse them, but in order to map the contours of how they shape the way information is made sense of.

It’s interesting to see Denny utilsing the vernacular of the global, technocratic elite, rather than the more region-specific recuperative projects audiences have become used to from him - such as 2012’s Full Participation, which explored GrassRoots Television, the United States’ oldest community access cable channel, an outmoded form that was also a prefiguration of networked communications to come.

Yet a link to these previous concerns is retained in the glaring absence of the local. This absence suggests the relationship between technologies of communication and the communities that use them is more opaque than ever, and at the same time has never been more transparent.

Interesting review. The metal barricades setup a linear progression to viewing the work but also practically and conceptually are a ...

Interesting review. The metal barricades setup a linear progression to viewing the work but also practically and conceptually are a constraint, an enforcement. One could link this to Scott Smith's idea of the 'flat packed futures' which are regularly handed down to us by technology and design companies, global visionaries and future leaders. "This is what your future will look like". Overwhelmingly optimistic in their characterisation of technology as enabling a productive and streamlined life, while strangely homogenous, locked-down in their thinking and depictions of it. http://boingboing.net/2013/07/03/flat-pack-futures-the-insuffi.html

Great comment. Data needs interpretation and Simon Denny's meta interpretation is worth a shot even though it is more than a nod to collaboration/conclusion 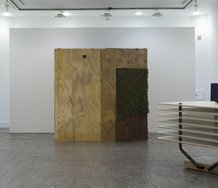 Published by Audio Foundation and CMR 2012 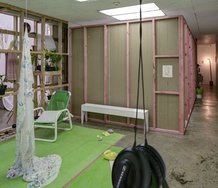