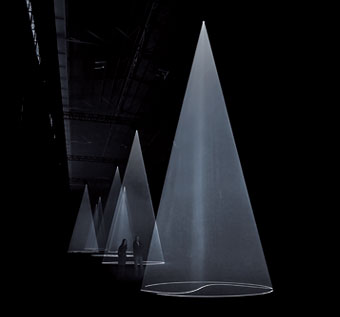 This is an unusually immersive show, though the presence of drawings on some walls also ensures an overtly analytic component where the viewer has to mentally link moving images with stationary marks

Anthony McCall is a British artist living in New York who in the early seventies, made a series of systems-based performances involving grids of small fires on open fields - set alight at dusk in strictly planned (‘scored’) sequences and time schedules. He was interested in the optical qualities of light and smoke and their spatial relationship to a viewer who might move around or through them.

Most of the works he made at that time involved light, often involving spaces such as dusty studios where beams of sunlight could be manipulated through incisions in paper placed over windows. Another particularly unusual project was a film made using hand-made animation, where a projected dot metamorphosed into a curved line which then grew into a self-joining complete circle. It was not so much the image on the screen that was interesting as the horizontal line/cone formed in space between screen and projector that the viewer could bodily interact with and which required smoky or dusty air to take shape. In clean air, the sculpture was disastrously invisible.

In the eighties and nineties McCall withdrew from gallery activity and worked as a catalogue and magazine designer. However in the early part of this millennium his work was rediscovered by some key curators and placed in highly visible, international shows. This prodded him into adapting his sculptural ideas for digital technology, and doing things that were impossible with reel to reel projectors - such as making vertical light cones. He also did some technological research and discovered ‘haze machines’. These can fill a room with a foggy ‘chalk dust’ mist that makes traversing light visible.

With digital know-how McCall’s more recent projects therefore have become more complicated. Sometimes they have three evolving linear elements side by side, such as a straight line and two turning parabolic wave forms that are like U’s. At one point in the cycle they join up to become a complete circle, before sliding apart and becoming independently turning, slowly writhing, components once more.

When you visit the current survey Christina Barton has put together for the Adam, you realise that the online documentation of McCall’s sculptural work often looks slick, as if digitally tidied up and possibly a little bland. The actual experience though is far better, for there are accidental components that bring an unanticipated richness. These include swirling highly ‘expressive’ eddies of fog that cling to the cordlike edges of each projected cross-section, and ‘white’ lines on the black planes of plinths that are not white at all but pastel yellow, pink and green.

From the titles that McCall gives his cones of light, he seems to regard the sculpture as a simile for the standing human presence. He sees himself as a humanist-structuralist, an odd hybrid of opposites, yet the work is sufficiently exciting in its own right. It doesn’t need clumsy conceptual overlayering - that makes him look like a Gormley wannabe. It works best trope free.

In an essay about McCall that Luke Smythe contributes to the Adam’s poster/catalogue he points out a number of writers like George Baker and Branden Joseph who think that McCall’s films of the 1970s continue the interests and “phenomenological concerns of minimalist and post-minimalist sculpture…(displacing) the emphasis of sculptural spectatorship away from the internal dynamics of the artwork itself, toward the moment-to-moment perceptual dynamics of the temporally-extended encounter between sculpture and viewer.”

This is an interesting issue. If one looks at examples of minimalist geometric sculpture of the mid-sixties, such as Robert Morris’s arrangements of square slabs or L-forms through which his audience moved, the gallery experience seems very different as a bodily sensation from what McCall offers. Most obvious is the fact that the minimalist work is made of painted plywood that the human form can move around and between, but not into - unlike a single cone made of light on dust that can be walked through.

So the question is, is standing within McCall’s conical shell of gradually moving blinding light, comparable to standing between identical wooden modules in different stationary positions that have solid planes? I don’t think so. Yet for sure, both are immersive and both have temporal-perceptual aspects - but one is overwhelming optical and ‘head’, whilst the other is more bodily in a far more general proprioceptive sense. It seems very odd to compare them.

This is an unusually immersive show, though the presence of drawings on some walls also ensures an overtly analytic component where the viewer has to mentally link moving images with stationary marks. McCall’s light sculptures surprise also because there seem to be plentiful allusions to earlier films like Len Lye’s Tusalava and Hans Richter’s Dreams That Money Can Buy.

The five vertical cones are smallish, on plinths, and so are called ‘maquettes’. They are not cathedral-like as in some installations (like in the image above) but they give you a good idea of the principles at work. The highlight is a long horizontal projection in the Kirk Gallery, You and I, Horizontal (2005), which though claustrophobic on a humid day (the air conditioning has to be turned off) is extraordinarily mesmerising. It has formal drama mixed with tantalisingly slow movement.

As with Viola and Cardiff at The New Dowse and City Gallery, this McCall show is an essential visit.