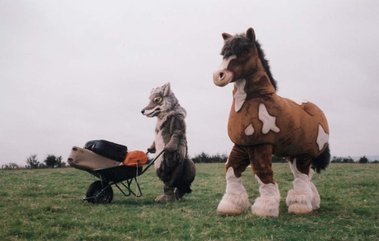 The interesting thing is how English Webb's humour is, considering he's a Kiwi who studied at Ilam in New Zealand. It fits in with aspects of Ronnie Barker, Dick Emery or Benny Hill in its gentle, non verbal and dreamily pastoral manner.

This set of three videos is about nature only approximately. It’s a nice title, appealingly vague, but nature and culture are never really pried apart. Nature is never remotely untouched.

In a student work from 2003, Richard Maloy films his brother posing in 28 languid positions in the back section where the bumpy lawn meets the high wooden fence. Like Ned Kelly or Gregor Samsa he is wearing a peculiar cardboard ‘armour plate’ or carapace, painted chocolate brown. It is funny in its deliberate amateurishness, but not as droll or as intelligent as Maloy’s later work with butter or clay applied to his own body. You can see connections with the large sagging cardboard architectural structures he later developed for ARTSPACE and SCAPE.

German artist, Christian Jankowski’s 1992-1997 video The Hunt shows him going ‘native’, using a bow and a quiverfull of arrows in a European supermarket. Impaling food that he will rely on for sustenance, hauling it (like killed prey) into his trolley, he pays for these processed products nonchalantly at the check-out counter. As a work this seems a bit of an anthropological one-liner. The project is simple, even memorable, but somehow not all that exciting to look at.

The video that really makes this show well worth visiting is Boyd Webb’s wonderful 2002 Horse and Dog, featuring a group of actors in pantomime costumes wandering through an English sheep farm dressed as a dappled Clydesdale and vertically walking grey fox. The latter is trundling a wheelbarrow of suitcases.

These hirsute animals affably amble through the paddocks searching for a bucolic spot to pitch their tent. They are on a camping holiday, struggling with maps and luggage, so there is plenty of opportunity for corny gags. One involves the horse climbing over a gate in its two separate halves, the other the pitched tent sprinting across the field, its hidden occupants fleeing a cloud of mosquitoes.

The interesting thing is how English Webb’s humour is, considering he’s a Kiwi who studied at Ilam in New Zealand. It fits in with aspects of Ronnie Barker, Dick Emery or Benny Hill in its gentle, non verbal and dreamily pastoral manner. An unusual work for him, and different from the more wildly incongruous and inventively Surreal photographs he is known for.

Thanks Ryan. Important to have that correction.

Thanks Ryan. Important to have that correction.