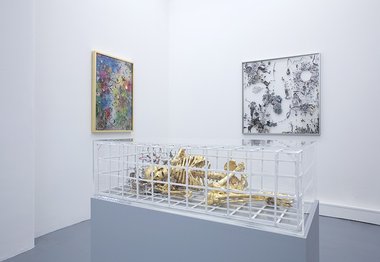 Gilded flies and golden skeletons might be in his repertoire but this art doesn't strike me as really delving into death or darkness. Madden makes us dizzy with the world and all its things. Somewhere between the joy of a Where's Wally book and a child's first A B C, his collages pantomime beneath Perspex, inviting us to point and stare and call the world and all its contents out by name.

One thing has been established, Peter Madden is an artist who knows how to make us look. In an age where an exhibition opening is often an invitation to watch an idea in slow motion - a struggle to ‘engage’ with a carefully placed pot plant, a curtain, or an abstract square tight lipped in taut perfection - his collages are a relief, first and foremost, because they are so openly trying to get our attention.

The tide is out in Post Disaster (Morning After). Half the frame is empty, the picture has been hung on a skewered angle, a communal clutter of chairs bob down the bottom of the work like driftwood. The chairs are entangled with a swimming elephant, the occasional fish, an aptly unblinking eye. Future Heights is Madden’s latest show at Robert Heald gallery and while it’s tempting to talk about the apocalypse and waste, recycling and this world we live in, overburdened with images, the main feeling I actually get from his work is festive.

Within his kingdom of cutouts there are recurring motifs, flocks of chairs, birds a goggle and eyes taking wing. Gilded flies and golden skeletons might be in his repertoire but this art doesn’t strike me as really delving into death or darkness. Madden makes us dizzy with the world and all its things. Like Empire of Rest, Future Heights clearly demonstrates an artist moving in his signature style. There’s an assurance here, an oeuvre that’s as definitive as Jackson Pollock’s drip paintings. Somewhere between the joy of a Where’s Wally book and a child’s first A B C, his collages pantomime beneath Perspex, inviting us to point and stare and call the world and all its contents out by name.

Madden is well established now as both a maximalist and a miniaturist and it’s watching these two worlds collide that lends his work its charisma. The recurring joke in his repertoire seems to be about the illusion of depth; the constant interplay of the 2D and the 3D. He is always making his collages stand up, they pop from their frames like the petals of flowers, frequently suspended on the stalks of black pins. His sense of trompe l’oeil is especially potent in sculpture. In Walk a team of black branches reach out of a man’s pair of shoes, only to bloom into 2D flowers. The pleasure is partly in the paper flowers, backed on cardboard and pasted flat, sunny side up.

It’s hard to avoid floral metaphors when writing about Madden’s work. These collages often ape the natural world and are often composed of pictures of natural phenomena, each work threaded and woven together like a bouquet. In a deep black frame on a black background Smoking Man contains the exploded neck of a volcano, spilling its orange cloud of gases; the lips of the smoker float above, alongside herds of open mouths and cascading eyes. The composition contains the volcano at its core. This work has its twin in Them (Misfit) another collage set inside a deeply recessed black frame. Otherwise the works in Future Heights tend to stand alone, and whilst each one holds it’s own, the exhibition perhaps never becomes more than a sum of its parts. But when the art is this good, I tend not to care. It’s a dealer show and I notice most of the work has sold. I don’t mention that as a slight either, in the art world commerciality is frequently spoken about as though it’s automatically corrupt or disabling, but often the intense glare of the market can improve an artist’s work and focus.

I have a tendency to resist analysis of the work in Future Heights. I have a tendency to resist too much analysis full stop. (A weird quirk in an art reviewer!) But it’s easy to overcomplicate what’s working about a show - and Madden has a history of overcomplicating things. The first exhibition I ever saw by him was entitled: Vermiculation of Freedom in the Theatre of Love. The details he supplies are Boschian. Baroque. I have not seen many artists work with a baguette - but I have always remembered the ones that do - Rene Magritte and Peter Madden.

A nod to old masters is perhaps inevitable. There’s a strong sense of surrealist slapstick in Madden’s back catalogue. But I have little illusion I’m being presented with the artist’s tormented subconscious. At times he uses the tropes of surrealism with the clarity and lucidity of a Smirnoff Vodka ad, this is particularly evident in smaller iconic sculptures like Walk which are so instantly memorable. Silver Shadow, his only large scale black and white collage in this exhibition, also contains a nod to the birth of cubism, a small cluster of cutout paintings signposted by the date 1912. An owl sits at the edge of cubism, not giving a hoot. There’s a great deal of mirth to be had in this collage, a light bulb hangs from a bat’s head, a series of sausages turn into a silhouette of Santa’s beard.

Madden has built up such an impressive collection of work now that the main critique of Future Heights is that it doesn’t contain any surprises. However it does suggest different directions. The dual black and white works Silver Shadow and the small jigsaw-like Hunger offer a glimpse of what it might be like to see him working with a pared back palette.