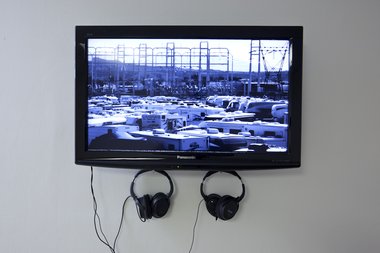 The show's title alludes to the spontaneous or unpredictable - in the form of abrupt sound or expressive movement. ARTSPACE director Riva has selected three quite different artists, so the viewer's challenge is to see if they sonically - or in ideational posture - overlap.

This unusual exhibition deals in its title with the spontaneous or unpredictable - in the form of abrupt sound or expressive movement. ARTSPACE director Riva has selected three quite different artists, so the viewer’s challenge is to see if they sonically - or in ideational posture - have commonalities.

The two film works by Ed Atkins and Sean Grattan are engrossing through their complexity. Though tricky they are not difficult because their weirdness is attractive. It comes with a sensuality.

Sean Grattan last showed his films in Auckland a little over two years ago before he left to study at CalArts. In this ARTSPACE show his contribution is split between a projected screening in a darkened enclosed space and a smaller, very Godardian, loop on a plasma screen in the small space outside the door. Both sections of Carmen San Diego: Out Of Work And On The Run are joined up in this presentation on youtube, so you can see what I mean by the unusual dialogue.

This film-maker has a Brechtian approach to sound, making it ‘unnatural’, deliberately elongating, contracting or overlaying the dialogue - undermining the ‘natural’ transparency of speech and the comfort of the viewer/listener. In the opening short section shown outside in the foyer, of planes leaving LA and different restuarant signs of national identities, the voiceover has a metallic industrial timbre, and in the other main viewing area he messes with the actors’ inflection (varying their speeds of articulation) in a manner that reminds me of actor Michael J. Anderson in David Lynch’s in Fire Walk With Me, where he phonetically learned his lines with words enunciated backwards so that they could be replayed ‘correctly’ in the final soundtrack. The enunciation is also like the vocal mannerisms of the actors of Hal Hartley films.

Grattan’s actors ‘speak’ a text that elucidates ethical concerns from community-focused philosophers like Emmanuel Levinas - who is mentioned. At the same time the bizarrely unstable intonation affects their facial expressions, making them use muscles that are usually ignored. (For most of us, correctly learning a new language often does the same. It’s bodily painful.) This unusual aural and behavioural treatment holds your attention.

Ed Atkins‘ film suffers by being too close physically to Grattan’s, but survives because Gratton’s movie is for long periods silent. For me, Atkin’s project is easily a major highlight in ARTSPACE’s exhibiting programme, a film remarkable in its innovative synthesis of aural texture, image placement and occasional excerpt of evocative text. Ostensibly about the impact of the artist’s father’s death, the work bombards and caresses the viewer with its frenetic and soothing b/w, chroma saturated, or subtly coloured images - demonstrating virtuoso editing through its manipulation of pace, emotional tone and camera movement.

Death Mask III is thirty-five minutes long and never boring. I have watched it through three times, and still there is more to be discovered. The text, images and sound at times co-ordinate or overlap, and then separate and remain independent. Silence and blank darkness is shrewdly controlled, foils for small, anticipated, rapid-fire images and delicate noises. Several write ups I have seen describe this work as disjointed, but it is too seductive for that. Each fragment fascinates. The sequences may jump about but nevertheless they entice you to linger because each moment is vivid. (It is related, I think, to Ron Silliman‘s discussion of experimental poetry in his famous book [in literary circles] The New Sentence, but not so extreme). The choppy strangeness, as with Grattan, is compelling.

Some images, like a craggy mountain peak, the vast sea, or the silhouette of a man holding a burning taper with his back to a roaring fire - are symmetrical and calming. Others, like a car speeding down a winding hillside road in the fog, are asymmetrical and stressful. Yet the total feel is one of absolute control, that any sense of chaos is illusory, that the work’s motives are contemplative. For those interested in complex conceptual layers, there is a theoretical component too.

Australian artist Charlie Sofo’s work in the large gallery space gradually emerges over the period of the exhibition’s duration. It often depends on what he notices during his many walks around the city during his stay: cultural phenomena that are particularly local (eg. the fittings of outdoor houselights, yellow grids of nonslip textures on Auckland footpaths, scoria decorations on traffic islands); certain nearby spaces he decides to intervene in or absorb within ‘his’ own exhibiting area; various contingent items which he collects for display. These depending often on whom he happens to meet and chat with. Usually other artists.

So amongst other things we see: a cartoon hotdog man painted on the wall (he has mysteriously migrated from the doorway of Newton Expresso Café across the street); a pyramid of pink and blue sticky note pages on the window at the top of the ARTSPACE stairs (the rest of the sticky padnotes are visible on a table in the gallery); a ladder uselessly hanging from a wire tied to a high window, with a dangling strip of green masking tape unused for the very visible application of nearby pink paint (like aspects of the other artists’ films these are gestures repudiating ‘desirable’ function); a set of small paint covered pebbles flattened by being ground against a hard surface (maybe trapped in Sofo’s walking shoes).

The overall synthesis then of Sudden gestures or noise, is it viable? Maybe not, but perhaps that doesn’t matter? Sofo’s sensibility is a bit too laidback and understated for my tastes. I cannot get deliriously excited by his work as I do with the films, especially Atkins’. However the show is on for another three weeks and his project is ongoing. It is only halfway through. I could change my mind. It’s a real possibility.