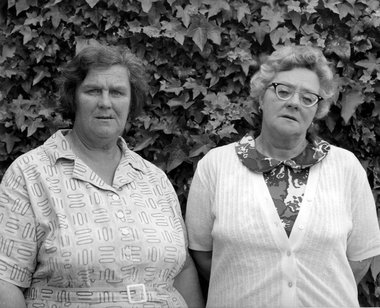 Contemporary life is full of stress, and increasingly so, and the mounting evidence of its effects on those “near and dear” isn't allowed to register because it's unpleasant and runs counter to the ideology. It's a classic “no go” area. For instance, the suicide rate in this great place to bring up kids is 50% higher than the road toll. But it's just easier to be distracted by stuff like diet, fitness, Facebook and upgrading the bathroom. All this lends weight to the cynic's observation that “dysfunctional family” is a tautology.

Survivors of disasters such as fire and flood often report that the first item they attempt to save is the family photo album. In future it’s likely to be their laptop, but whatever the medium the message remains the same. That message is aptly summed up in Luis Bunuel’s incisive remark Memory is our coherence. Saving family memories could be the strongest human instinct after staying alive and sex.

A need to preserve social cohesion may be squeezed in somewhere in that sequence, the institution of the family being the glue to that cohesion. Or we strongly believe it to be so. Family photo albums may be testament to the strength of this belief as much as anything. The ideology assumes the family unit to be the basis of what we call society (notwithstanding Thatcherite atheism on the matter): nurturing, supportive, accepting and loving. In its relatively short life photography has done much to buttress this ideology. There we all are, almost without exception, strutting our stuff before the camera, lined up, smiling, acting out our part in “the family” drama, not letting the side down.

Yet many people’s experience diverges from this sunny ideal. As this is being written, radio news reports yet another baby being admitted to hospital with “non-accidental” injuries. Domestic violence is a blandly statistical description for some pretty nasty business, frequently scarring its victims for life, physically and psychologically. Contemporary life is full of stress, and increasingly so, and the mounting evidence of its effects on those “near and dear” isn’t allowed to register because it’s unpleasant and runs counter to the ideology. It’s a classic “no go” area. For instance, the suicide rate in this great place to bring up kids is 50% higher than the road toll. But it’s just easier to be distracted by stuff like diet, fitness, Facebook and upgrading the bathroom. All this lends weight to the cynic’s observation that “dysfunctional family” is a tautology.

The word kin goes back a long way, to the beginnings of language, tribal groups needing a way to label those who belonged together. Our notion of family is a much later and cosier development. This eponymous show is primarily about belonging too. Most family albums are a kind of folk art - touching, amusing and scary by turns - and riven by conventions of posing and environmental situations that are too familiar to list. But the photographers in Kin are an altogether more knowing bunch. They’re aware of the folk tradition but they’re also heirs of the tradition of Modernism, with its formal concerns and its own conventions of depiction, and these aspects of photographic engagement thread Kin together as a show.

Curated by Whanganui-based gallerist Paul McNamara for the New Zealand Portrait Gallery, it includes a number of photographers McNamara acts as agent for. This association between galleries - albeit hugely productive in this case - is a further instance of a blurring between public and private, between the benevolent and the commercial that’s increasingly becoming a feature of exhibiting culture. Over the past twenty years public galleries seem to have become bogged down in a bureaucracy castrating their enterprise, while commercial galleries have grown bolder in their ability to exploit opportunity - the two situations now meeting to shake hands on mutually agreeable partnerships. That’s life. There’s no copyright on initiative. But there are, however, hovering in the background, a range of ethical issues that no degree of temporary convenience and curatorial success can entirely suppress. Institutions need to be scrupulously clear about the exact parameters of their relationship with private enterprise.

Predicated firmly on the concept of bloodline, Kin is divided into five sections: grandparents, parents, siblings, children and grandchildren. The 63 works date from a 1973 Clive Stone portrait of his mother and her twin sister to 2009 contributions from recent graduates Joseph Griffen and Olivia Taylor. During his floortalk the day after the opening McNamara revealed he’d selected the photographers because they are “currently active artists who are known for portraiture” and that all works were “pre-existing” images.

Mediums range from a daguerreotype through silver gelatin to Polaroid, Cibachrome and a smorgasbord of digital reproduction. There’s even a video, part of Griffen’s installation, a four-minute interview with his grandfather, which is perhaps the most affecting part of the whole show. Fearless, earthed and unforgettable, it’s testament to the equation where proportion shifts from lessening physical powers to increased wisdom and courage. The accompanying large photograph of this man standing by means of his Zimmer frame is an extraordinary image of human dignity in the face of physical diminishment.

Images range from the well-known (Peryer’s parents, Noble’s Ruby) and the previously exhibited to the completely unknown. In this configuration they’re all revelations. What Kin demonstrates is a kind of rich intimacy - one free of conventional representation and spared reluctant subject response. There’s a sense that the photographers aren’t aiming to fill the family album, they’re just getting on with their work and the human subjects to hand just happen to be closely related. A good example is Peryer’s The Baby, a portrait of his grandson Stan who’s fixed the camera with a very beady eye, manifesting perfectly Robert Hughes’ remark that People who imagine that childhood is a state of prelapsarian innocence do not know children well. At root, small children are burning balls of jealousy and insecurity. Remove the thin veneer of “socialization” and you see a monster, a little mass of pure id and unslaked desire.

In Kin most of the images are individual portraits, so it’s left to groupings of the works and the overall context to convey a larger sense of family. The show is perhaps more about plotting a series of relations than depicting the dynamic of family. There’s nothing as raunchy as, say, Richard Billingham’s work from the mid-1990s in the UK to reveal a family in action. Maybe kiwi photographers, products of a small intimate culture, are a bit too shy about all of that - reluctant to picture the scars as well as the smiles - and so the curator had no similar material to draw on? There doesn’t seem much about, and anyway, McNamara’s premise of bloodline excludes partners, which probably makes depicting families in action problematic.

The one exception to this slightly sanitised scenario is, of course, provided by Rhondda Bosworth. Although circumspection riddles her four images of Z, their torn and divided structures are suggestive of the tensions and rejections often marking intenser family relationships. The face that families often present to the world is here downcast, introspective and disconnected, the prints’ grainy greys symbolic of the scarring experience that belonging to a family can be.

Olivia Taylor has seven works in the show, and with them she plays with that face families often present to the world, mimicking - one hopes! - the family depiction conventions of current professional photography: wearing their Saturday best, scrubbed up, arranged pyramidically with mum and dad at the centre, they stare solemnly at the camera, fully aware of their role in creating this ad for the family. Occasionally there may be a glum male teenager right at the back wishing he were anywhere but there. But otherwise it’s a studied image of pure harmony. Taylor admits some manipulation - enough already - and although her images are unsettling it’s hard to see what she’s done to make these ideological puppets even weirder than they might be anyway. At first sight they look OK, but the more you look the more these subjects feel like aliens, constructed by plastic surgeons operating out of a small asteroid in stationary orbit behind Pluto. Could this be a case of “the family portrait” coming out?

One general label states: The title Kin may restore some nobility to the notion of family, which has become somewhat politicized, and places it alongside Whanau. But only theoretically, because there is, apparently, no Maori representation in the exhibition. Which of course may be one of the points McNamara is making. “Family” and “whanau” are not exact fits anyway - just look, for a start, at the radically different approaches to what Pakeha call “adoption” and its ramifications. As a photographic exhibition, however, Kin is the closest parallel yet seen to those groupings of tupuna portraits adorning the walls of many wharenui recalling ancestors, certainly, and surely cementing the notion of whanau, but also paying a kind of tribute to the power of photography - something Maori recognized early, accepted and integrated into their tikanga.

Knitted together, this exhibition forms a symbolic parallel to the notion of ties that bind, a binding that accommodates individuality while sacrificing difference to a sometimes oppressive ideology of family. But Kin speaks of another family too: the family of photography. Despite the medium’s growing visibility in the art world over the past 20 years, it’s rare to see shows in public galleries about photography. They’re invariably about individual photographers, and it’s not the same thing. Accommodation doesn’t necessarily imply acceptance, and as a medium photography is featured only when it happens to fit within prevailing notions of art. In this scenario accommodation starts looking like resistance in palatable form. Why should we have to wait for these Neanderthal guys to die off? They claim to possess intelligence, so how come they can’t change their minds - especially in the face of so much overwhelming evidence? “None so blind” as they say.

Kin may consist of photographs, but centrally it’s about photography, showing what its tribe of images can do uniquely - not just tolerated as a late invitee to the art party. A partnership between private enterprise and a national institution, Kin’s advent as a show about photography is to be acknowledged and heartily encouraged. Bring them on.

Hello This is a wonderful review of a really noteworthy exhibition. Kin also raised the issue with me that Peter ...

Hello
This is a wonderful review of a really noteworthy exhibition. Kin also raised the issue with me that Peter addresses: are we scared to show our family relationships in 'fine art' photography that we might consider contributing to social media sites like Facebook or You Tube?

As to exhibitions in public galleries and museum that are about issues within photography rather than an individual focus on one photographer's work - Peter is correct in noting that we hardly ever see such shows locally. Or books.
Best
Ron