The Eight New Zealanders in the Sydney Biennale 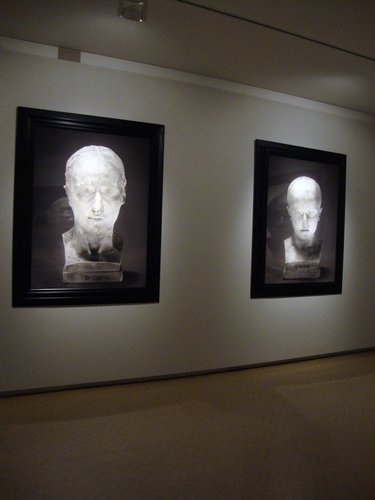 David Elliott's event in its eight venues was clearly intended to be sensuous and visual, celebrating optical pleasure to bring about political change and give a profound sense of the dominant preoccupations of our time. I liked the fact it wasn't snooty or over rarefied, yet it was exasperating. While half a dozen sub themes could be clearly detected, there was also an overwhelming sense of fragmentation and unwieldy excess.

The Beauty of Distance: Songs of Survival in a Precarious Age

Directed and Curated by David Elliott

It seems to have gone by so quickly. The 17th Sydney Biennale finished a fortnight ago and I was fortunate enough to go over and catch the last five or six days, being particularly keen to look at our Aotearoa New Zealand presence.

I tend to always have a good time when I visit Australia. Even if the Biennale’s art - picked by David Elliott - was appalling (which it wasn’t, far from it) I would still be blissed out moving around Sydney looking at other things. For this year’s international art jamboree NZ provided a line up of eight very capable contributors (Shane Cotton, Brett Graham, Jason Greig, Julia Morison, Fiona Pardington, Reuben Paterson, Yvonne Todd, and Rohan Wealleans) so, how did it all work out?

Low key but successful I think. Elliott’s approach to picking work was hugely broad in its sweep (perhaps over inclusive) but his Biennale’s title alluded to indigenous races surviving in an era that globally is now ominously vulnerable for the descendents of colonised and colonisers alike. So with Aotearoa New Zealand’s particular bicultural history, and its proximity to Australia, our participation was really inevitable.

In a somewhat crowded MCA (the main Biennale venue) where two-thirds of the number of artists selected would have made a happier, less chaotic, presentation (artists’ works were often split up - meaning half their images were not directly identifiable) Fiona Pardington and Brett Graham had very good positions on the ground floor.

Pardington was given a whole room to present her large subtly coloured photographic prints of phrenological plaster casts made by Pierre-Marie Dumoutier on d’Urville’s expedition to the Pacific in the late 1830s. Those of Dumoutier himself were not included, while others of d’Urville’s family were. The eight portraits were much bigger than those in the related show Pardington had with Two Rooms in Auckland, were all frontal (no profiles or backs), very imposing - and from the chatter I could hear around me, won Pardington lots of admirers.

Her Auckland dealer show, though less muscular, used a whole gallery, and set out the historical and intellectual context for the plaster casts - using two exhibitions. The Sydney work, because of the poignancy of the shut eyes (they can’t see or imagine us, unanticipated visitors from the future) and the strident head size in the prints, was strangely haunting in its directness.

Brett Graham’s carved wooden sculptures of a Stealth Bomber and Russian scout car were covered with intricate ornate spirals (like those put on muskets) that could be interpreted in at least two ways: either created to defend an independent Māori sovereign state, or else to satirise the weak when they to adopt the symbols and technology of their oppressors and hope to regain loss power through that. The bomber was too small to have any real presence or menace as a symbol for fantasised Māori military air power (and was overshadowed by the Sun Yuan and Peng Yu installation of photographs in the same room) but the larger scout car was very striking as an enigmatic metaphor for a mobile, land-based defender.

The other New Zealand artist in the MCA was Shane Cotton. He had the misfortune to be allocated to the most cluttered room in the building where some paintings were double-hung Salon style.

Julia Morison contributed one of her multi-panelled Myriorama works, Network, a huge painting installed in the Sydney Opera House on a long straight black glittery wall that hid the famous John Olsen mural. Her display had to fight the garish purple carpet in front, vertical slatted batons above, and an Opera House administration seemingly intent on waging internecine warfare with the Biennale staff over visitor accessibility. Very few art lovers saw the work unless they, like myself, pretended to be paid-up tourists and sneaked through the barriers on the tail end of an officially sanctioned, guided touring party.

Morison’s gridded image of vertical and horizontally aligned rectangles intersected in a formation of 35 columns and 5 rows. The repeated modules of shimmering, bending parallel lines looked like penumbra-inducing Bridget Riley motifs filtered through a thick trellis of Art Nouveau ornamentation. The configuration caused black squares to regularly peep through the crenulated image with suspended skinny ribbons appearing on the lower edge and bending horizon lines at the top.

Her repertoire of various wavelike, twisting, rippling and chopped up oval shapes (with different splashed textures and tints) invited the imaginative viewer to mentally shift the sections around and improvise for themselves the flowing or deliberately truncated connections that within the Biennale’s global and historical context became symbols for air or water (or fiscal) currents, a restraining but writhing surveillance net, or an overarching omnipresent method of information retrieval.

One of the main venues for a concentrated display of Biennale work was Cockatoo Island, a location with a history as a convict settlement and later, shipbuilding site. Four New Zealanders were among the fifty-six artists included there.

On this bleak location out in Sydney Harbour there was a dominant ‘alternative space’ ethos, an anti-white cube presentation with an awareness of local history, so these New Zealand displays were placed in small linked weatherboard cottages that were quite bland and which had served as workers’ accommodation. Therefore it was the theatrical work that most succeeded; ‘theatrical’ in terms of horror, not of glamour or artifice.

For Yvonne Todd the most emaciated or neurotically intense images seemed more appropriate than her more subtle photographs, just with Jason Greig his most malevolently demonic monoprints seemed very apt with their mock-Victorian melodrama. The ‘excessive’ works welcomed climatic and geographical or historical extremes as a context.

Todd’s portraiture tended to need a white cube around it (perhaps because it was photography that is studio based) as did Rueben Paterson’s glitter paintings of bedspreads, a parrot and lions, which for their political/queer content, needed a sympathetic fastidiously pristine environs, not a forlorn or hostile, slightly delapidated one.

As for Rohan Wealleans, his talismanic animal sculptures (or podgy shamans?) with their striking carved out and glued-on layers of stratified dried paint, cried out to be looked at closely. They were isolated from their audience by an absurd metal barrier and so their intricate detail was wasted; a problem that related to the obstructions inflicted on Morison’s work. But there were other things too. On this island the art overall was poorly lit, so on overcast or rainy days, or late in the afternoon, a lot of the non-moving image and non-sculptural works were impossible to examine properly.

Despite this lighting issue, David Elliott’s event in its eight venues was clearly intended to be sensuous and visual, celebrating optical pleasure to bring about political change and give a profound sense of the dominant preoccupations of our time. I liked the fact it wasn’t snooty or overly rarefied, yet it was exasperating. While half a dozen sub themes could be clearly detected, there was also an overwhelming sense of fragmentation and unwieldy excess. This was reflected in the highly ornate jam-packed catalogue that was wonderful for dipping into, but oddly lacking cohesion within Elliott’s somewhat piecemeal essay. But he has an ‘Eye’, and whilst that term is often dismissed nowadays, the ability to pick visually dynamic art is something to be valued.

So on that score there was plenty of intriguing work to admire and remember, from Paul McCarthy’s mocking Ship of Fools, Ship Adrift to The Balance, Folkert de Jong’s similarly sardonic installation of Dutch burgher greed. Within such a rich context Fiona Pardington’s having an easily accessed room all to herself gave her images real clout - so she greatly benefited. For those living in Sydney, this show, with its varied New Zealand contingent, offered a lot for those with plenty of time to explore, reinvestigate, ponder once more and sift through again.