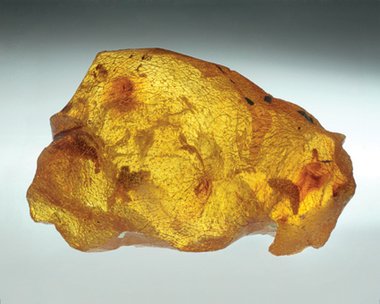 The golden, striation-covered clods are presented as if they are asteroids floating in space against a backdrop of clear blue sky. They are like spat out, gemlike, sucked-on pebbles of caramelised hokey-pokey: self contained revolving worlds intact unto themselves.

The three billboards Mary-Louise Browne is currently presenting on the Reeves Road wall opposite Te Tuhi are enlarged images of kauri gum, resin nuggets photographed from the collection of Howick Historic Village, in Pakuranga. The golden, striation-covered lumps are presented as if they are asteroids floating in space against a backdrop of clear blue sky. They are like gemlike, sucked-on pebbles of caramelised hokey-pokey: self contained revolving worlds intact unto themselves.

Although kauri gum is often equated with pioneer colonial culture there is something mysterious, primal and ancient about these ambiguous, honey-coloured translucent forms, and the vague dark marks trapped within them. Some of these shapes hint at Maori rock art found in caves - something entirely coincidental but worthy of comment - because of Browne’s early work. Oddly (because I don’t think it is deliberate) they have links with her performance work from the early eighties, where she traced outlines of her body and hands onto white walls - a reference to cave art. These hoardings, with their glowing, glistening, toffee-like interiors, hold your attention as you examine the dirt embedded in the hairline fissures on their outsides, and ponder about each nugget’s history - was it buried deep in the ground or floating in the ocean. What part of the northern North Island did it come from? How many thousands of years old is it?

Browne is normally known for her text works but these images take her to some place new. The sensuality of the seemingly edible resin, its indistinct murky internal layers, the rough crumbly, slightly powdery exterior: all suggest possible areas of mental contemplation not immediately linked to the concision of language - more a type of drifting reverie that is less tangible. The optically enterable gum seems akin to the sort of substances Gaston Bachelard was interested in with his psychoanalytic discussions of fire and water as poetic tropes, except it is solid, while seeming to be flickeringly alive and in motion.

An exciting new direction for this artist.