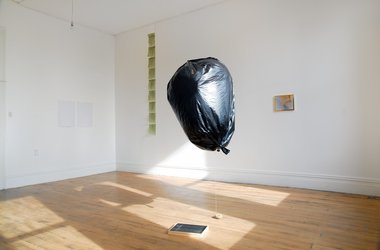 Eliminating unwanted items from the body is also dealt with by Sanné Mestrom in his clever floor-based photograph of flattened blobs of chewing gum embedded in a section of Karangahape Rd footpath - spat there over the years by local prostitutes. Next to the tray is a black polythene rubbish bag filled with helium balloons, tied at the top to a ball of string on the floor. Mestrom's caustic comment on the public perception of prostitution (as 'trash') slowly moves towards you as you walk past, activated by disturbed air currents.

With a title that refers to the ease of air travel and moving physically ‘light’ art between countries, this exhibition of New Zealand and Mexican art grew out a residency that Louise Menzies, Kate Newby, Fiona Connor and Sanné Mestrom had at SOMA in Mexico City. Eight artists present work in Gambia Castle, and down the street at Split Fountain is a limited edition Fiona Connor postcard stand with Mexican tourist postcards.

In the Gambia office there is a table of relevant publications examining aspects of contemporary Mexican art and the artists displaying work here - a very practical (but not wildly imaginative) artwork in its own right by Adriana Lara.

On the same table are some text covered ceramic plates by Kate Newby and a Spanish/English publication by Louise Menzies where she fires questions about the nature of autonomy to Jésus Cruz Villegas. The context is the National Autonomous University of Mexico (UNAM), a huge university campus where 300,000 students live (also called ‘University City’), and where Cruz Villegas, a human rights activist, studied sociology and political science. Though Menzies’ excellent questions are brief, his replies are not - taking up four A4 sides of dense (as in unparagraphed) English prose. His answers need editing.

Nevertheless this text is accessible, jargon-free and informative, especially in his discussion of the UN’s support for the rights of the world’s indigenous peoples, particularly the situation for those in Mexico. He points out it now has become officialy recognised that they needn’t fit into a ‘Mexican’ identity or be ‘Spanishified’, but that the richness of their culture should be protected, their traditions conserved, and that they should have their own form of government, access to natural resources and with radio and television stations in their own language. To those of us in Aotearoa this discussion is not revelatory, but it is interesting hearing it come from another part of the world - and seeing it as a more global historical phenomenon. I imagine that is Menzies’ point.

Connected to all this is another work, sent over by Sofia Taboas. On the main wall is a column of sheets of watercolour paper, stained with chlorophyll - that part of photosynthesis necessary for plants to get energy from light - its green dye created here by mulching up leaves. This pinned up vertical line implies a cross-section of a forest canopy, a covering rapidly disappearing as more and more trees get converted into building timber, or chips for paper that ends up in art galleries.

On another wall on the opposite side of the room is a diagonally folded sheet of paper with a rubber stamped Y that could be a tilted and inverted T, for translation. This work, by Tania Perez Cordova, is interactive in that you lift up its edges to compare the ‘bilingual’ recto and verso planes as with say English and Spanish correlations. The projecting folded cross-section seems to reference intersecting linguistic structures.

Joaquin Segura’s work is also interactive. He presents a pile of sawdust tipped into a corner and invites the visitor to urinate into it. Go take a leak in some gallery corner could be a title for an action he has already performed, written like say, an early Mike Parr title, and you might want to sniff closely to see, but it is also ambiguously worded - teasing the visitor to do likewise. Intended to castigate the white cube, such an action would also imply pissing on the ‘corner art’ of Joseph Beuys or Felix Gonsalez Torres, so this visitor relucantly decided not to, even though he realised he would be using a sophisticated art technique glamorised by Andy Warhol, Jackson Pollock, Andres Serrano and Helen Chadwick. If you visit the show, perhaps you might not be so reticent.

Eliminating unwanted items from the body is also dealt with by Sanné Mestrom in her clever floor-based photograph of flattened blobs of chewing gum embedded in a section of Karangahape Rd footpath - spat there over the years by local prostitutes. Documented at night, it is in a shallow tray with mirrored sides; the extended image of wet gum-specked asphalt glistening. Next to the tray is a black polythene rubbish bag filled with helium balloons, tied at the top to a ball of string sitting on the floor. Mestrom’s caustic comment on the public perception of prostitutes (as ‘trash’) slowly moves towards you as you walk past, activated by disturbed air currents.

Also on the floor on the other side of the room by the door is a shrewdly camouflaged plastic gun carefully wrapped with photographs of the actual planks it is lying on. Created by Marcelaygina this suggests the hidden violence no-one ever sees, horror that is never discovered.

Gambia Castle has acquired an excellent reputation for generating easily transported but classy, international group shows. This is no exception.