Teenage Apprehensions at The New Dowse 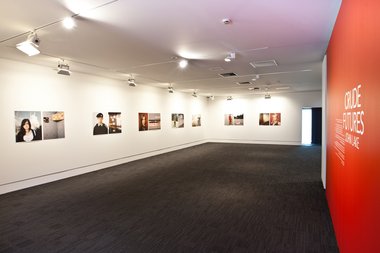 In diptych Lake pairs portraits and settings, encouraging the viewer to make jumps of action and allegory between the individuals and the empty sets or stages next to them. To question what kind of action our teens might undertake. Each is costumed to roleplay. Will the deliciously made-up vampyre take off in the glamorous showroom-ed antique black hearse? Will the fist clenched camouflage-covered kid turn the treehut behind a concrete wall into a more sinister kind of surveillance tower?

There’s something cinematic about the luscious allure and promised drama in photographer John Lake’s carefully calibrated portraits of teens and settings in the Hutt Valley.

In the frame is that perennial story driver: the hopes and fears for the future of youth on the edge of things - adulthood, suburbia and the realisation of flickering thoughts. Boundary riders between the wild and manicured, portraiture gives these young people nobility, but we look to what beckons beyond their direct calm gazes as they imagine their own futures in their interior movie theatres.

Lake sets up both a dark and celebratory loaded space, a powder keg for a burn-off of the crude futures of the title. The allusion is to futures trading on crude oil, like youth a volatile, valuable but not inexhaustible resource.

In diptych Lake pairs portraits and settings, encouraging the viewer to make jumps of action and allegory between the individuals and the empty sets or stages next to them. To question what kind of action our teens might undertake. Each is costumed to roleplay. Like Cao Fei’s cosplayers (seen earlier at the Dowse), to play out alternate realities and escape their situation. Will the deliciously made-up vampyre take off in the glamorous showroom-ed antique black hearse? Will the fist clenched camouflage-covered kid turn the treehut behind a concrete wall into a more sinister kind of surveillance tower?

A young woman with a long pink paint laden fringe and mysterious facial scar (at a guess, like several others, isolated out of context in close-up from character enactment at a roller derby) is set next to a large marine buoy behind a chain fence, which bears the graffiti ‘USSR’. Like other pairings here object and portrait, in the studio portraiture tradition, are buoyant with suggestion.

The associations suggest escape but also playground entrapment. Fences, doors and windows must be negotiated, and the escape is only cosmetic or theatrical. Those portals lead to stages and shops. The settings are full of exquisite handmade folkish painted details that Lake has a good eye for finding. The pairings can horror movie tease - a conventionally attractive woman, all made up and dripping with jewellery, for example, set next to a set of stage stairs with a hokey painting of a pitchfork on the wall. Irony abounds: the tiara crowned ‘Miss Friendship 2009’ with her freshly presented carnations is placed next to a paintball-splattered crusty old corner of a commandeered living room.

This is also the territory of yearning that is fashion photography (there’s no mystery why clothes have more life on the bones of young people). Lake’s photographs embrace stylisation and the elevation of the misfitting and underappreciated on the suburban edge. There’s a political action here and a powerful humanity. While other photographers shoot empty landscapes, malls and halls, Lake is giving glamour to people. He embraces the photograph as a dream machine.

This is where the cinema comes to play. The celluloid gloss that set dressed South Auckland so beautifully in Once Were Warriors, matched with the drama that saw the world through the eyes of the quiet misfit teenager played by Emily Barclay in In My Father’s Den. I was reminded of this seeing Australian director Sean Bryne’s horror The Loved Ones in this year’s film festival. It was Peter Jackson meets John Lake - beautifully shot, with a clear love for its art, its setting and an enormous sympathy for the situation of young people.

The classic beauty of the images encourages you to appreciate their loading: the conversations in colour between portraits and podiums, the interest in shapes and forms, and Lake’s continual play with the perspective of camera and stance of subject. The roleplaying that is the photo shoot is also under investigation. Like Yvonne Todd, these are sophisticated glamour shots.

The commodification of youth in film and photography is also alluded to in the title, and an opening wall text discussing the Futures Market, with its hedgers and speculators. It’s a rather obtuse introduction to the exhibition, but does suggest Lake still has plenty of political oil to burn.

This exhibition also features a wall projection with Lake’s subjects being asked vague open-ended questions like ‘What will the world look like in the future?’ Their answers are hesitant, slow and muffled, and visually the headshots are heavily pixellated. It’s as if their miscreant identity in the police station interview room is being protected, when in fact they are being rendered absent in a storm of digital distortion. The future is presented as crude and uncertain, a vaccum sucking the air out, echoing the punk rallying cry ‘no future’.

Crude Futures follows Lake’s investigation into similar territory in The Rise and Fall of Western Civilisation: Part One where the ideas of roleplaying were more explicit and documentary driven. That title was taken from a documentary on the LA punk scene (Lake has also put together a history of Wellington punk - and he continues to work through how the youth punk spirit continues to have political relevance), suggested suburban society turning inward, devouring itself through escaping into fictions. In Crude Futures this has become more implicit and compacted - left for us to implode. While as I wrote about the previous exhibition Lake seemed to be experimenting with throwing up all sorts of cluster bombs of imagery. Here he’s achieved a presentational refinement he lacked then.

The exhibition is thoughtfully sequenced, reading like a book of chapters (publishing would suit the arrangement and give this series the wider audience it deserves). The exhibition begins with a raven-haired girl, with a plastic horse staring out the shop window behind her. It ends with a herd of horses, it taking some time to realise we are looking out from the shop, trapped behind the horses we started the exhibition looking in on.