Through the Eye of a Whitefaced Gollywog 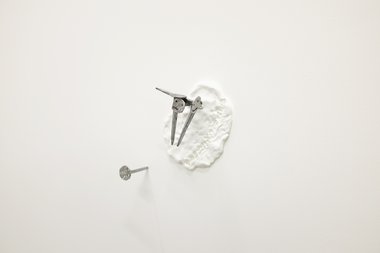 Before I realised it was a symbol for racist superiority, I thought it was just a face—a cipher for stupified humanity, maybe of a primal, deeply bestial variety. With the switch of the gollywog to a grimacing white face, and the piercing of the eye, we have the inevitable nemesis.

In a new gallery that is entered through the Samoa House Library, Shiraz Sadikeen presents an array of relief sculptures, plus two ‘painted’ works on canvas incorporating methods of printing, and another with glued ‘skins’. And you can help yourself to an exceptionally elegant folded publication with two essays (Sadikeen’s elucidation as artist, and an extremely engaging discussion on political binaries by Ben Rosamond) designed by Felix Henning-Tapley of fount-via.

Intimate in scale, these works reference the universally despised cloth doll of this review’s title; its original face, manufacture and simplified codification. The artist’s exhibition title (and that of the four reliefs) is German for ‘spirit’ (expanded by Hegel to focus on history); and one painting is a digitally distorted symbol for Halal, the word for ‘permitted’. The latter being distorted implies that the ‘permission’ is false.

Sadikeen‘s relief sculptures centre on a latex skin based on the stereotypical gollywog facial physiognomy. It is white and has the lumpy texture and shape of spilt porridge—linking to Bataille’s notion of the informe—but pierced in the left eye by an antique nail, on which are balanced (magnetised?) three other spikes, and a fourth hammered in just beyond the face.

Before I realised it was a notorious symbol for racist superiority, I thought it was just a face—a cipher perhaps for stupified humanity, maybe of a primal, deeply bestial variety. With the switch of the gollywog to a grimacing white face, and the piercing of the eye, we have the inevitable nemesis.

Before I realised the flat shape was a face (colonial or ghostly or both), I thought it was some sort of inhabited island, a collective base—with a hammered-in rhetoric of group versus individual, and perhaps referencing Balamohan Shingade‘s recent project at AUT.

Information about the image source and treatment is given in Sadikeen‘s textual account, but it is not obvious visually nor apparent in the titles. He has allowed that open interpretative space to appear, to part and permit the nurturing of several possibilities.

The antique nails—with their smiling gollywog faces rendered by tiny drilled holes (these heads also providing a grid of peeled off skins for another already mentioned work)—imply that hatred perpetuates hatred; that what goes around comes around. Yet, before you fully grasp the nature of Sadikeen‘s material your immediate first response is likely to be waves of convulsive laughter. With four sets of three nails balancing on a fourth, hovering over four leering visages, plus the nastiest of ocular penetration—how could it be otherwise?

We see here the spirit of visceral gaiety confronting the ghost of now scrutinised bigotry. These smirking spectres circle and jostle; horror and jocularity lunging and wrestling as they tumble to the ground. On and on they go, each trying to attain hermeneutic superiority—eventually collapsing with exhaustion in the mud. A draw. Even stevens.