The Tracks of My Tears 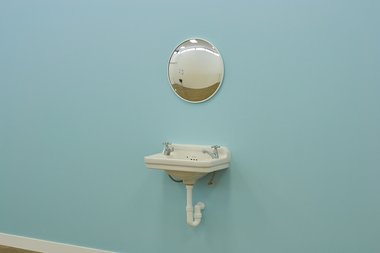 With a convex mirror conspicuous over an elegant (but dysfunctional) Edwardian basin on a pristine pale blue wall, and copious sheets of self-absorbed pencilled (partially erased) writing scattered on the floor, the installation is obviously preoccupied with selfhood and emotional stability. The fish-eye mirror hints at a paranoid Escheresque ambiance.

The second tranche of this ‘new artists’ show features Severine Costa and Xander Dixon, each artist (like before) being given plenty of room to demonstrate their sculptural or planar concerns.

Costa’s installation (And the Sky Slowly Seeping Through) seems like a homage to Smokey Robinson, a satire sending up the plethora of celebrities reciting traumatic personal tales of clinical depression. It conceptually merges daily psychic interiorities and climatic exteriorities seamlessly together.

Her installation dwells on the liquid residue, the daily measuring and accumulation of water, its documentation, transitions and recycling-perhaps from weeping; perhaps from condensation on Artspace Aotearoa’s glass doors—overlaid with meteorological predictions and percentages of pollutants. It dwells on procedural formalities, the labelling, tabling, filling and emptying of small bottles, the storing of diaristic information—and as a metaphorical parallel, the presence of two types of sink: one functional, linked to an aquarium serving as a kind of sump; the other not.

With a convex mirror conspicuous over an elegant (but dysfunctional) Edwardian basin on a pristine pale blue wall, and copious sheets of self-absorbed pencilled (partially erased) writing scattered on the floor, the installation is obviously preoccupied with selfhood and emotional stability. The fish-eye mirror hints at a paranoid but Escheresque ambiance. There is a compulsive obsessiveness involved too, as in the constant statistic making, or the rubbing out of sections of pencilled text, though that might allude to the effects of dripped ocular water.

In this show his imagery is less poetically evocative than Severine Costa’s, being very focussed politically (and specific geographically)—particularly with its references to colonial surveying pegs and stakes, and to the European perception of an ‘empty’ landscape. The red tubes in the gallery seem to be being regularly shifted around, tending to drift towards the eastern side of the building and avoiding the western wall.

To me, Dixon’s work seems too simple, being unargued (merely stated) in its emphasis on the movement and transience of landownership, and too declarative in its singularity of presumptions. It makes no effort to draw the viewer in. (What sort of viewer you might ask?) No layered or worked-on complexity is forthcoming to entice prolonged interest. No resonating tropes to make visitors linger.

I have no beef with the politics of the piece—that’s easy to grasp—only the lack of ‘artness’ in the art, the paucity of structured ideational weight.