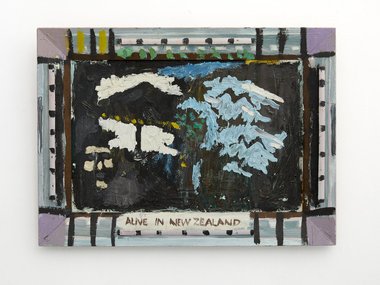 Richard Killeen
Forty-Eight Years In Between

One set of works ‘clumsy’, resentful, and sardonic, and looking as if painted by dipping a stick in a pot of thick paint and smearing the tip; the other set, being contemporary, is technically advanced, using current computer software to print from a huge pool of colourful saved drawings, first randomly selected, then glued on to a plywood base with an impeccable industrial finish. 48 years in separation. Two very different, isolated, periods of intellectual concentration.

With the nine works from the early seventies (that has not been shown before), Richard Killeen is embittered and frustrated, lashing out at this country’s then stifling conservatism with sarcastic written phrases or by painting faces or landforms—in a calculatedly wonky manner—but also researching new framing possibilities, writing on them and adding protruding angular triangular shapes. He’s smart-arse and angry, and thinking about how to move forward, but while doing that, cultivating an ironic cackhandedness—a coarseness—that looks like he is painting by holding his brush between clenched teeth.

Take a look at Killeen‘s three sets of gallery installation shots on his website. They are interesting because they centre on this period. Note that Gordon Brown and Hamish Keith’s book Introduction to New Zealand Painting came out in 1969, and that that publication inflated the significance of Woollaston, Hanly and McCahon (particularly Hanly) and grossly undervalued Gordon Walters—whom Killeen admired early on.

We see two pages of his Petar James shows (when he was part of a group of ‘international’ Petar Vuletic directed artists that included Walters), and we can also see his earlier show with Barry Lett. They show how he moved abruptly from anonymous crowd scenes in big cities to tilted combs or long lines of stacked-up pointed triangles.

The other end of the gallery shows Killeen‘s current interests, using his computer to select images through chance, but which he as artist oversees—he is still greatly invested in how they work visually and ideationally together. The works’ title refers to the way that like a plant the images come to the surface from different ‘parent’ roots, and then mingle together.

Each painting’s birch plywood base is square shaped so that there are four alternative ways of hanging, and the chosen images (that are a sort of transparent transfer) vary from the linear and simple to being shape-oriented and intricately complex.

These images are organised in two ways, using grids: one is 3 x 3, the other 2 x 2. Both in the same sized square, so the images are in two sizes. The former are obviously busier in terms of the visual mingling of abstracted elements when you stand back, but the latter are visually less complicated as butted together pictographs. Killeen’s muted colour is carefully controlled. The wood’s rippled pattern peeks through from behind the computer drawings.

With his pictographs, they are individually (as components of a group of four or nine) hybrids anyway—even before they have been drawn out of his bank of over 4000 drawings. These bizarre and intriguing blendings, that Killeen has made or discovered over the years, are like words made up from different languages (or in this case, categories) the way somebody like James Joyce might operate within Finnegan’s Wake. With each rotatable panel, its intonation when ‘read’ has four possibilities; four ways of running together four or nine enunciated pictographic ‘words’; four ways of exploring top, bottom and sides—reinterpreting the jammed-together configurations.

If you are living in Wellington, or calling in next weekend, you might be interested to know that on Saturday ...

If you are living in Wellington, or calling in next weekend, you might be interested to know that on Saturday afternoon at 2.00, Zahra Killeen-Chance, will be doing a performance work. It is called 'Nichework.'

'Nichework' is an interrogation and exploration of the labyrinth of birth, pregnancy, and the movements created and performed during gestation. Performed by gallery artist Zahra Killeen-Chance, it considers her own body and pregnancy. This will be Killeen-Chance’s fifth performance for the McLeavey Gallery.

'Nichework' will follow a singular pathway or labyrinth which has an opening, centre, and exit. Using both disciplines of dance and art, Killeen-Chance uses her body, music, and the motions and nuances that these create in order to tell a story, unsettle our way of seeing things, and ultimately experience something with her whilst also being part of the ritual that is taking place.

Labyrinth has a dual meaning. Firstly it connotes a maze of irregular twists and turns in which it is difficult to find our way. Secondly it suggests the inner structure of our ears which give us hearing and balance. This duality of definition could be seen as the journey of pregnancy in which unpredictabilities and obstacles appear, which we must overcome and travel through, always tuning into our senses until the end. But is there an end? The next step is parenthood, a labyrinth in itself.

'Nichework' will be ritualistic in its approach. Although the unknown will be encountered in a labyrinth, Killeen-Chance sees this as a meditative opportunity to gain insight into the journey.

In 'Nichework', the artist will be wearing a knitted costume created by the AUT Textile Design Lab. The sound score for the performance has been created specifically for Nichework by music artist Emi Pogoni and is evocative of the ebb and flo of water. Pogoni also created the soundtrack to the artist’s last performance at the gallery earlier this year, Angular Momentum.

To reiterate, the performance will take place at the McLeavey Gallery, 147 Cuba St, on 6 July at 2pm and will run only once, for 30 minutes. Afterwards, the audience is welcome to make their way through the labyrinth themselves.