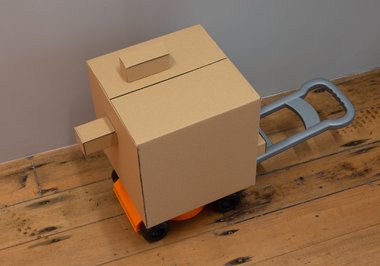 This exhibition brings in two other Mokopōpaki art entities to make clearer aspects of the earlier PᾹNiA! presentation. Many details of the work shown at Pakuranga are mirrored, but here too, the products of the three contributors are very cohesively interwoven, the different producers at times riffing off each other's images and methods. The results are visually more elegant and more thematically complex than before.

A clever extension of the recent The True Artist Helps the World by Asking for Trust show at Te Tuhi, this exhibition brings in two other Mokopōpaki art entities to make clearer aspects of that initial PᾹNiA! presentation. Many details of the work shown at Pakuranga are mirrored, but here too, the products of the three contributors are very cohesively interwoven, the different producers at times riffing off each other’s images and methods. The results are visually more elegant and more thematically complex than before.

Yllwbro also exhibit a Ministry of Traction screenprint/relief sculpture as a ‘working drawing’, and PᾹNiA!, a cardboard model of the building on wheels (Honorary Consulate (Mobile Cardboard Detachment)). There is also a tabloid-format newspaper with a conversation between Yolo and Blu of Yllwbro about another Koolhaas project, the China Central Television building (Universal Modernisation Patent, Skyscraper Loop; also affectionately called ‘Bent Skyscraper’ or ‘Big Pants’) in Beijing, and the comparatively dull and unimaginative Auckland architectural environs.

Another Yllwbro work has two silkscreened images on an old section of pup tent. One shows the parliament beehive building and other the Māori ‘Tent Embassy’ set up after the 1975 Māori Land March led by Whina Cooper ended in Wellington, and which existed for ten weeks until Prime Minister Muldoon forcibly closed it down.

In PᾹNiA!’s You’ll Never Be a Kiwi, lined-up differently coloured sauce holders become symbols for cultural diversity and a reaction against the assumption in its advertising jingles that consuming (red packaged) Watties Tomato Sauce is a sure sign of ‘Kiwiness’.

In her Polder & Boulder, we  also see a set of clever Duchampian puns on the use of the shower in the gallery space—where the tray on the floor is covered with fake grass and the sides reference the dikes in the Netherlands—Polder the word for the enclosed, sealed off, dry land, and Boulder for bolder.

Mashed Potato Cream Cheese Moon obviously inks to PᾹNiA!’s Te Tuhi moon film. Here though, the flat circular potato bread positioned on a Kleinian Blue field references an old Scottish nursey-rhyme where the bread becomes a membranous drum that is repeatedly hit by the adjacent ladle. The ladle and drum originally were seen merrily as male and female genitals: the crust a vagina, and ladle, erect penis and scrotum.

A.A.M. Bos, like PᾹNiA!, draws heavily on his Dutch heritage, and sometimes on his fourteen months as a young Dutch soldier serving in Lebanon as part of the U.N. peacekeeping force. The line up (on a shelf) of plastic oranges mounted on toy tanks—with flowers in their gun barrels—references aspirations for a better world, and PᾹNiA!’s Plastic Orange Band in Te Tuhi.

In two other works, Bos’s Dutch references become more historic and less contemporary. His duraprint, The Drapers’ Guild Sets Up Shop in Dusky Sound, uses a famous painting by Rembrandt of Amsterdam merchants taking a coffee break during a negotiating meeting. Strangely this is set in a wild landscape backdrop with a cascading torrent painted by William Hodges during Cook’s second voyage. Three mugs on the table repeat a detail from Rembrandt’s scene, as if recently purchased from a museum shop.

Another suite of seven photographs blends Dutch with Aotearoa images. Portraits of tui are described as Dutch ambassadors within the Netherlands confederation of provinces, each emissary being an individual named after the state it represents. Suspended beneath each portrait is a unique bag of spice, alluding to the entrepreneurial reach of the Dutch East Indies Company with its vast range of cultivated products shipped from S.E. Asia and Africa, and its formation of the world’s very first stock exchange.

This is a nice looking show where you can delve into the copious explanations and footnotes in the Mokopōpaki catalogue if you wish, or just enjoy the sensuality (especially the colour) and imagination-prodding free associations for themselves. You don’t have to get caught up in the wordiness of this gallery’s PR—informatively interesting as it may be. These objects often have a poppy exuberance and humour that is pure pleasure anyway.