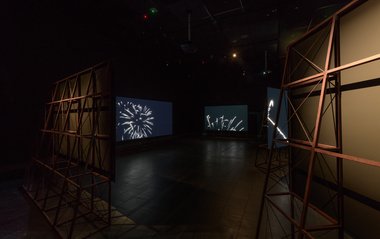 The front of the screens, with the gunpowder pyrotechnics, is a kind of decoy, but their back is sneaky and not noticed at first. The rears (with the work's deadening silence) give us a sort of floating sensation as we pass by them—our heads hovering far above our feet—moving through the black void attempting to follow the lure of the vaporous linear traceries ahead.

In this darkened gallery (much much darker than what the accompanying photographs here indicate) we see a firework display on six widely separated screens, with soft spotlights caressing the bracing supporting struts at the back. On screen cameras on drones move towards the erupting dissolving plumes of coloured smoke while we awkwardly negotiate our way around the space, shuffling between various black rectangles arranged in unpredictable angles.

Watching the movement of the unfurling streams of spluttering smoke, we are also aware of the screens as objects, especially their backs which may be intended by the artist to resemble box kites or parts of the wings of bi-planes hovering in outer space—or are present simply a stipulation of OSH. However you interpret the salient presence of the illuminated backs—an artistic plan or a bureaucratic necessity—the gallery is very dark (you walk carefully) and these lit-up backs are components that can’t be ignored. They provide an ambiguity that seems to be the point of this show. Your disorientation generates a mental elevation, a sort of reverie which lifts you in your imagination high above the city rooftops at night. Strangely a sort of steampunk fantasy. The struts and bracing provide a surreal element.

In the latest gallery Bulletin (B.193) there is a reprint of an Anthony Byrt article where he talks about Carr as being a ‘trickster’, using the term in the way the anthropologist/mythologist Lewis Hyde is well known for (and echoed by essayists and poets like Gary Snyder).

Byrt describes the term as such:

Hyde shows us that the trickster is, in every culture in which it appears, a force for change…The trickster’s troublemaking reminds us that we’re only flesh and bone, and that our bodies are both contingent on, and vulnerable to, our appetites. (p.11).

If he is accurate—and to me ‘force for change’ sounds a bit pompous (Carr just likes being a scallywag)—this installation demonstrates Carr’s mischievousness blended in with an exploitation of viewer appetites for escapist fantasy. The front of the screens, with the gunpowder pyrotechnics, is a kind of decoy, but their back is sneaky and not noticed at first. The rears (with the work’s deadening silence) give us a sort of floating sensation as we pass by them—our heads hovering far above our feet—moving through the black void attempting to follow the lure of the vaporous linear traceries ahead.

Now you might think I’ve had too many cups of coffee for breakfast, or that I myself am trying to be a trickster (though a trickster would never declare that fact—where the coyote mask is identical to the face underneath), and that safety precautions have simply stuffed up the aim of the project. But the ambiguity of the two clashing interpretatons lends credence to what Byrt has pointed out. The show is on till February. Call in and decide for yourself what is feasible.