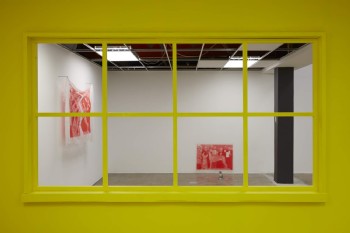 To me, personally, it is clear that despite the stated intentions, an “aesthetic register” is not absent. That is what draws me into the space in the first place—why I bother calling in. It is the 'carrot' that makes me curious about its ideational aspects, the reason I'm now tapping on my keyboard a few days before the show's end, thinking about three visits.

A ‘new artists’ show that follows on from New Perspectives (2016) and Dirt Future (2017), this exhibition—with leading mentor Steve Lovett, other invited mentors and Artspace staff (read ‘curators’)—has a smaller more focussed group of artists, excellent written introductions on the different practices for the public to take away, greater clarity in its spatial organisation, and a greater emphasis on the social and relational “ahead of any indexical aesthetic register or consideration of the commodity value of art.”

Lovett’s admirably lucid introduction talks about the gallery being “stripped of its primary function to present the outcomes of art practices and aesthetic research” replacing those values with “a series of ethical dialogues” in a laboratory that allude “to the significance of indigeneity for their practices and in framing institutional dialogues.” These discussions and interactions about cognisance of, respect for, and impact of the tangata whenua take place over the duration of the show and the “sight of what the exhibition is will be understood in retrospect.”

To me, personally, it is clear that despite the stated intentions, an “aesthetic register” is not absent. That is what draws me into the space in the first place; it is the ‘carrot’ that makes me curious about its ideational aspects, the reason I’m now tapping on my keyboard a few days before the show’s end.

Wai Ching Chan’s physical contributions are two suspended ropes demonstrating sequential arrangements of different types of knot. One is 5 metres long and made of coarse manila hemp, the other is 9 and made of soft mop string. These vertical knotted lines are a form of coded language.

When I first saw them I thought they might be mnemonic, working as memory aids for language content, as described by Frances Yates in her famous book, The Art of Memory. In it Yates writes about ancient Greek speechmakers who used mental pictures of a building they methodically walked through. In their imagination they placed an evocative object on a central table in each room that started them onto the next section.

Chan is a Cantonese New Zealander whose family come from Hong Kong. The different types of knot have specific traditional meanings such as ‘everlasting friendship.’ They are not decorative, nor mnemonic, but a type of glyph—more like a word than a letter—that expresses goodwill to Aotearoa. They embody concepts of affection and loyalty.

Olyvia Hong was born in Aotearoa to South Korean parents. She has a two part work: a platform hanging from the ceiling holding a young man wearing a colander/‘helicopter’ fan hat, and with a mirrored underside; and a room with about sixty plastic or ceramic dog figurines, with two images of a dog show announcement, printed onto sagging plastic.

With these images Hong seems to be satirising the competitiveness of the artworld, especially with the dogs, the mirror and the omniscient pantocrator high above—mocking the cut-throat striving for ‘success’ and artists like dogs fetching sticks for their masters (the so called ‘gatekeepers’). The images on the wall ridicule the dog show judge. In one of them he is removed altogether. Hong’s title (Breeding Negotiations) is ambiguous with several interpretations in that it states the complexity of identity politics, the different types of global whakapapa that here in Auckland come together to socally interact.

The opposite of sarcasm via canines, the installation by Faamele Etuale is next door to the dogs and is pure belief. It extols the importance of the family, especially the role of ‘Mum’. The room, its furniture, and the contents of its cabinet, are all painted a cheery sunshine yellow, and on the walls are photographs of family members, hung with draped-over colourful leis made of felt. Etuale’s project is a maternal tribute that includes a floor made of a ‘yellow brick road’, a reference to Judy Garland and later on, Elton John. While there are not too many surprises in Etuale’s project, it is very focussed. Some of the other works in the show in comparison seem a bit flighty, zigzagging around with too many references.

In Bronte Perry’s floor installation we see a reference to the Jehovah Witness church. His black steel skeletal structure of a church hall is placed over a bed of river rocks. Rocks for this artist are tropes for hardened hearts. Nothing can grow on them, for they are resistant to love or approaches from the church. Yet native grasses are growing on the stones on the Artspace floor, so apparently there is always hope. Perry has an interest in the impact of settler Christianity on the lives of young Māori, and in the nature of symbolic language as used by evangelicals, discussing baptism in a river for example as a form of watery burial from which the congregant emerges.

Tyson Campbell’s complex installation involves video, writing, sculpture and dense symbolism everywhere, and is intended to question “how we can see and feel [blak] queer futures of organisation.” A hickory bow is positioned outside the entrance but the fired arrow inside the dark room is embedded in an unfurled scroll on a gift-wrapped box. The curling paper looks like a redacted text (of spread out words) but is a player piano score. The ‘desiring’ arrow has travelled around the corner, not in a straight line—a pun on the term ‘bent’—while the door portal itself is lined with a flowing transmuting text that seems like a tightly edited version of a section of writing, taken from a help-yourself publication stacked up in the corner.

When the Queen of Deceit is under the [crossed out] affluence influence, a confident bravado forgets its risk assessment. Driven by duty & sustained by [crossed out] faith we wrecken with contradictions in our aspirations….

On the floor in the centre of the dark space is a straighter trajectory, a red laser beam that is symmetrically split when it hits the corner of another box. This is another contradictory aspiration that is reckoned with, perhaps; a vector as metaphor for desire, like the church as river, dog as artist, sheltering room as mother’s love, or rope as bonding communication. Visual methods of focussed conversation.