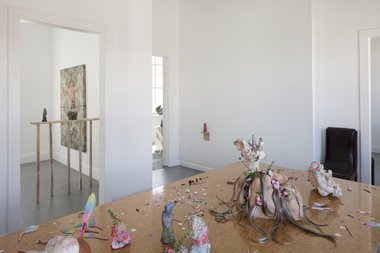 Park fits very much into the Ivan Anthony stable, as her practice often seems to allude to Francis Upritchard with its wonky sculptural figures, Kushana Bush in the way these are carefully decorated with paint (using pattern or rendered figures) and Brendon Wilkinson with the strange murky (‘folded') symmetries of her paintings.

Suji Park is well known now as an inventive ceramicist, one who oscillates between crumbling mineral chaos (natural geological processes) and a twee sugary kitsch (sentimental narratives). She is happy to juxtapose the two, placing them on tables or propped up wooden shelves projecting out from the walls.

Park fits very much into the Ivan Anthony stable, as her practice often seems to allude to Francis Upritchard with its wonky sculptural figures, Kushana Bush in the way these are carefully decorated with paint (using pattern or rendered figures), and Brendon Wilkinson with the strange murky (‘folded’) symmetries of her paintings.

I haven’t seen this artist make paintings before and I think the two here are the best things in the show. They are covered in showers of beaten marks, as if repeatedly knocked about with a small hammer. Attached to their surfaces are tufts of scruffy carpet and occasional wispy strings of coloured plastic thread or cotton. These long floaty hairy bits, as if plucked from an old man’s chin, hover in front of the fields of percussive indentations, moving in the breeze. As paintings they are very strange: worn, pocked-marked and textured, yet subtly ornamental, as if discovered in some subterranean Buddhist shrine in Nepal.

As for her sculpture, I prefer Park when she is compositionally shambolic, powdery and gritty, using disintegrating, encrusted, crystal-like, resin embedded forms. In fact, I intensely dislike her narrative imagery with sluglike figures - humans and animals - they are far too derivative. And even though her kiln practice has overtones of Kate Newby, her spilling-out, inventive, firing explorations testing the properties of unusual new materials are interesting - far more compelling than her decorating of smooth organic shapes with garish neo-hippie coloured feathers or checks, dots, painted diamonds, petals, leaves or flames.

That some of those dark diamonds are present in Park’s paintings demonstrates the complexity of her practice, her obsessive mark making that works best when restrained and not compulsively, endlessly, automatic. The fact that the paintings are without Park’s characteristic full-on ‘overload’ - they seem comparatively unfinished - is an advantage. It brings in a casualness that makes them akin to found objects, like abandoned bits of wall found on a demolition site.

Aside from her painting, with her sculpture it is as if Park is split between two opposing types of practice: one process-oriented, material-driven and chance ridden, the other telling stories and deliriously fiddly with its ornamental marks. Sometimes she places the two together, but overall: an uneasy clashing mix.