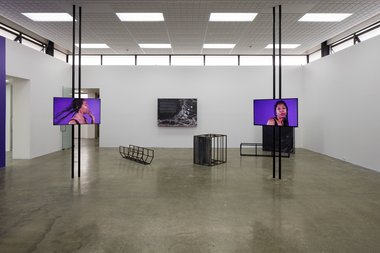 Whilst one would immediately expect the rise of Brexit and Trump to have dramatically knocked back expectations of any future cohesive progressive community (to dare to now seems so ostrichlike) the key notion up for scrutiny is ‘potentiality,' accompanied by optimism and confidence. Not too buoyant, but definitely up. Not because shows like this take a long time to organise and can be superseded by historical events, but because of belief. An uplifting and positive faith in the possible.

The last exhibition we had in Auckland by an Artspace curatorial intern was Henry Davidson’s extraordinary The Shadow of the Dome of Pleasure, a decidedly bodily and immersive experience. Whilst also with its fair share of sensuality, and (like Davidson) replete with international names, Tendai John Mutambu’s focus in his own presentation is more overtly philosophical and ideational. Responding to Giorgio Agamben‘s collection of short essays The Coming Community (1993), it is intended as a ‘critical (re-)reading, a thought experiment, and a material provocation’ - looking at ways of resisting contemporary capitalism and its accompanying neoliberal rhetoric.

Whilst one would immediately expect the rise of Brexit and Trump to have dramatically knocked back expectations of any future cohesive progressive community (to dare to now seems so ostrichlike) the key notion up for scrutiny is ‘potentiality,’ accompanied by optimism and confidence. Not too buoyant, but definitely up. Not because shows like this take a long time to organise and historical events could make it thematically obsolete, but because of belief. An uplifting and positive faith in the possible.

Yet looking at the works, there is no uniformly thematic cohesion in approach - in fact you might argue there is a split; colourful moving video on one hand (al Qadiri & Al Gharaballi, Songsataya, Rottenberg, and Syms) and text dominant static works (Harry, Nash, Menzies) on the other. Sculptural components are present, mixed with both - as is delight in texture and surface.

There is also wit apparent within Mutambu’s title in its double layering: firstly, a signing off of a letter that - in its declaration of identity - comes to us from the future with all its latency, and secondly, the use of the word ‘yours’ that suggests an invitation - offering (in a possessive pronoun) ‘second person’ ownership; a claimable participation.

One of several contributions that look at workplace politics, Newell Harry provides a short text and small image to tell a story about ‘Island Time’ (‘Aelen Taem’), an account of a four people in Vanuatu hiking for 45 mins across country to meet a ferry, only to discover that the boat’s captain has decided not to make the scheduled trip. Instead he has preferred to stop work, take a nap and watch some Sunday movies. The story is an understated critique of the work ethic, and any ‘responsibility’ where labour might be beholden to global capitalism and its tourism economies.

Time and a Half, a playful imaginative film by Mika Rottenberg, is about the state of reverie that a waitress in a fast food restaurant has during ‘dead time’ when there are no customers to serve. Bored but fantasising about paradisiacal tropical atolls, she rhythmically clicks her long decaled nails on the table top, and soon her long hair lifts and flows through a draught from a large fan that also causes her plastic plates to leave their stack and float away out of the room.

Louise Menzies‘ five inkjet prints on handmade paper revive an interest in magazines promoting alternative lifestyles. She has reproduced their covers on fibrous crafted paper that is alien to their original 60s and 70s mainstream (non-art) production, and found these images within the Alternative Press Collection at the Thomas J. Dodd Research Centre while doing a residency at the University of Connecticut. One of her chosen publications is a 1969 reprint of Paul Lafargue’s ‘The Right To Be Lazy’- first published in 1863 - which attacks the ethos of working.

Fatima al Qadiri & Khalid Al Gharaballi contribute a clever satire (click here) of a group of middle-aged gossipy women from Kuwaiti, played by four young men in drag, bantering over pre-noon tea served by a maid. Seated in ornate Jacobean chairs, they manage to tease, insult and outwit each other - despite being greatly separated - positioned on the four sides of a huge ballroom - and taking turns to wipe their perspiring brows from a box of tissues on a card table in the centre of the space. Though the men are assembled as a tribute to Abdul-Aziz Al Nimish, a distinguished actor famous for his expertise in playing middle-aged women, in this show, they represent the undermining of conventional gender roles coalescing into a future community.

Dan Nash‘s convoluted and extremely dense coastline texts can’t be read in isolation but rather are sculptural elements that co-exist with his welded steel and highly skeletal boxes, chutes and cradles that look like farm equipment for transporting hay to livestock. Nash’s waves of incessant language (imagine cut ups of Burroughs, Ballard and Golding) are embedded in the outer planes of these networks of steel armatures (as if a rarefied descriptive texture) placed over printed images of swirling rock pools that look molten and like distorted octopus tentacles. Nash is an admirer of the American philosopher Alphonso Lingis whose book (in the Auckland city library) The Community of those Who have Nothing in Common (1994) seems related to Agamben’s discussion.

In Notes on Gesture - the title also incidentally of an Agamben essay - Martine Syms has two Artspace walls - adjacent to her four monitors - painted a deep purple, a reference it seems to the novel by Alice Walker, later made into the well known film; this bank of colour being the most conspicuous item in the show. The vibrant hue is a way of making the actions of the black actress in Syms’ video loops (with onscreen purple backgrounds) extend outwards into real space (as do Al Qad and Al Gharaballi also with their use of ornate furniture that is both onscreen and off), her spiralling gestures edited to sync with chopped up, streetwise & spoken hip hop. Her hand movements and facial expressions were transformed into repeatable clips after being spontaneously provoked by a series of cue cards. The result is a sardonic take on the superficial veneer of being a black female, a derisive commentary on glamour and fashion’s disconnect with prosaic social reality.

For many visitors, the highlight of this show will be the contribution by recent National Contemporary Art Award winner, Sorawit Songsataya. His commissioned video and adjacent sculptural installation is a typical display of his renowned visual wit and innovative digital animation. The video features a person with spindly arms wearing a colourful striped jersey. Their brown hands with nimble fingers are shown exploring Navajo string games, particularly the one of the title: Coyotes Running Opposite Ways, comparing its enclosed shapes with constellations in the night sky and various crystalline molecular structures photographed though an electron microscope.

Next door in a meditative space (separated by a translucent jute wall) is a rudimentary hut, half humpy and also like the shell of a compressed igloo, but made with branches, copper wire, fishing line, woollen garment parts, and ceramic twigs. It is more a windbreak than an effective provider of shelter. Lining its base are two soft mohair rugs, beautifully decorated with printed streaks. Three others are hanging outside in the main gallery, a possible reference to Joseph Beuys or Robert Morris’s use of felt or blankets.

Architecturally distinct, these two components of Songsataya’s contribution play off the values of community thought (collective knowledge that forms and develops games as ways of conceptually structuring the world) against the solitary body (its physical needs when in a small shelter). With the string game player gazing through the spaces between the entwined lines towards the stars we see the beckoning future, the potential assembling of different collectivities calling (across time) for a better and fairer world.

No doubt Daniel and I were new to Agamben when we wrote ‘Autonomous Anonymous’. Upon reading this today there appear ...

Given Artspace’s eminence as a professionalised, over-curated, and project based client of the State (two-year planning, marketing plans, performance reviews, ...

Given Artspace’s eminence as a professionalised, over-curated, and project based client of the State (two-year planning, marketing plans, performance reviews, theoretical and financial accountability, and ALL THAT) it’s way difficult to feel, let alone sustain, any Agambenian mood with ‘Potentially Yours: The Coming Community’. Everything’s over coded, seems willed, explained away, interpreted, predetermined, as if on a mission.

For Agamben artworks are inoperative, irreparable, withdrawn into the saved night: like the adored Bartleby, artworks PREFER NOT TO. Or, artworks SUSPEND the operation of the apparatuses that want to govern them, control them, give them ends; emerging from this suspension as magical, whatever-beings: THUS!

That's why Agamben’s ethical praxis requires a minimal yet somewhat difficult kind of subtraction, i.e. it requires our removal into what he calls the coming community. Why difficult? Because as a ‘praxis’ the subtraction or removal is gonna seem willed, and as such rendered open to voluntarism and activism, thus predetermining the coming community as task-orientated and teleological. Avoiding this possibility in Agambenian terms is to actualise potentiality, yes, but ONLY AS POTENTIALITY: “This—but not only this—is possible”. Said otherwise, it is to make a radically PASSIVE decision; or better, it is to allow that a non-substantial, non-identitarian form of life befall us, as if by magic.

Meanwhile over in lower Parn-Hell, Mirage’s swan song exhibition ‘Spirit Mask’ seemed a better expression of the coming community. Thomas & Co. curate POTENTIALITY with ease and happy care (see: Snake Pit)—and without even having to tell us that they’re doing so. Sure, Gali anak Adam’s exquisitely carved masks emerge from an ethnic tradition, but in doing so they expose this tradition as being exactly what it is, AS SUCH, comically installing all the ancestral gestures, folds and lines deep inside the Pan-Shamanic cauldron of the contemporary Whatever.

And through the interior door, doomed doomed doomed in Mirage’s irreparable back room—here, there, all around, at times hidden amidst the dust and decrepitude—a meandering group show of works seemingly unrelated to either masks or each other. But these are works subtracted from any State apparatus whatsoever; works gathered together despite the relative absence of determinate contents in their affects and demands; a short lived COMMUNITY of those who have nothing in common (Lingis). Or said the other way round, what was in common here was an acceptance of the NOTHING of planetary nihilism as being potentially something.

No doubt Daniel and I were new to Agamben when we wrote ‘Autonomous Anonymous’. Upon reading this today there appear moments in our text when the intricacies of his thought eluded us. And no doubt too there are brief passages where we adopt a Negri-inspired, task-setting and activist tone!

But hey, Agamben sometimes drifts this way too:

"And if to constituent power there correspond revolutions, revolts, and new constitutions, namely, a violence that puts in place and constitutes a new law, for destituent potential it is necessary to think entirely different strategies, whose definition is the task of the coming politics" ('The Use of Bodies', p. 266).