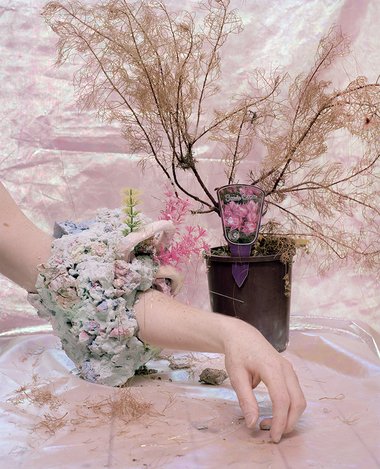 For most people, I think, the highlight of the show will be the coloured prints made when all three artists are thinking together to make collective decisions. These three prints vary in size and surrounding mounts and framing, and each has its own ‘personality' and subtly humorous mood.

In this Bowerbank Ninow exhibition we see an assortment of photographs, some of which are by Solomon Mortimer (by himself) and the rest his collaborations with performance artist (dancer and video maker) Zahra Killeen-Chance and ceramist/sculptor Suji Park. There is also present a projected video of a performance by Killeen-Chance, who did a performance on opening night as well.

The nine works on display vary from Killeeen-Chance‘s video of her hidden, bent over and hunched body contorting, stretching and contracting beneath a piece of fabric designed by Suji Park - in front of a semi-darkened wall of concrete blocks - to the various silver gelatin or digitally printed inkjet photographs. One of the latter is a set of four butted together to show Killeen-Chance lying on her back out on a long table (as if a tanning bed in a red-lit darkroom) with, in the third print, a section of her left leg mysteriously missing.

Three of Mortimer‘s black and white prints in the main gallery are very traditional (in say, the body-oriented style of Edward Weston) but one in the office of an open medicine cabinet possibly alludes to Damien Hirst. It looks more contemporary and could have been made by Christopher Williams, the LA conceptualist.

For most people, I think, the highlight of the show will be the coloured prints made when all three artists are thinking together to make collective decisions. These three prints vary in size and surrounding mounts and framing, and each has its own ‘personality’ and subtly humorous mood.

jiii features the profile of Zahra Killeen-Chance‘s outer right ankle and foot as she presses down on three rainbow coloured Slinkies - those bouncy, glittery and coily toys that seem to have independent minds and bodies of their own - holding them firmly in position with her weight. Thus emphasising three sets of compressed latent energy that are firmly controlled, with a dark backdrop and reflective floor that accentuates the glowing metallic colour, her limbs in this image and in Serruria Carmen carry on the theme of Mortimer‘s photographs.

The pink Serruria Carmen features Park‘s ceramics as a wearable prop that on Killeen-Chance’s limp arm could almost be made of pale blue icing, squishy marshmellows and white chocolate. I imagine it was in fact quite heavy and incomfortably abrasive to wear, but as a resolved image the arranged elements look sumptuous and beguiling. And amusing, with the titular dead plant, some scattered dried grass, and what seem to be fake aquarium water weeds made of plastic.

More dying botany is found in Spineless Rhodanthe, the title merging the name of a spineless cactus with an adjacent white flowered, but apparently dead, plant in a paint bucket. In the background we can see the horizontal shadow of Zahra Killeen-Chance’s arm and hand hovering above the bulbous, paddle-like succulent.

On the basis of the collaborations here, it seems obvious that when these three artists pool resources, something really special happens. I left this gallery feeling starved for more, thinking that they should team up more often, and do something more substantial. The results would be well in advance of the sum of the parts. 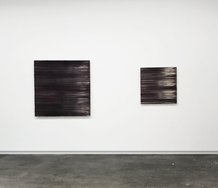 Linen, Board, Paint and Speed