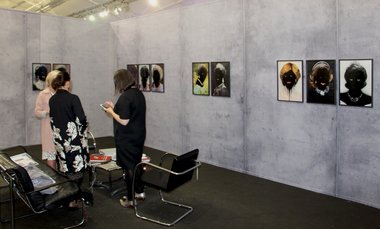 The other conspicuous booth with a focussed, very singular impact, was the Sarah Scout Gallery with their presentation of a suite of Tony Garifalakis works, photographs of female members of the Royal Family with their visages transformed by dribbly splodges of sprayed-on black paint. Wonderfully evocative as an anarchist gesture, the mutilatory insult (with their eyes and mouths peeking through the oily stains) fiercely mocked genetic purity and aristocratic privilege.

This, the second Auckland Art Fair to be presented in The Cloud - though still chilly in late May (like last time) with the sea under your feet - was better designed with what was more comfortable pedestrian (and socialising) room, more cleverly aligned gallery booths, and less claustrophobically high walls. It felt more user friendly. The desired ‘rubber necking’ foot traffic flowed better, demonstrating the democratisation of art using overt visual seduction - a backlash (perhaps) against the tyranny of the academic text.

This year there was more emphasis on the selling of multiples and hardcopy publications, a wise move with Parsons Bookshop long being absent from downtown Auckland (and still much missed), but with nine local non-commercial institutions joining forces (under the Ngātahi banner) in a booth to present a wide range of enticing and comparatively cheap editions. For those who might not normally consider buying art, but who were also excited by collecting sophisticated and elegant reading matter, there was a bookshop of classy art and photo books organised by Kelvin Soh and Anita Totha.

As with last time when galleries that courageously focussed on one artist (like say Tim Melville with Johl Dwyer, or Brett McDowell with Martin Thompson) gained in ideational and visual impact, this year Michael Lett had the brilliant tactic of getting Eve Armstrong to run one of her trading tables from his booth, a strategy that drew on her unusual ability to attract (or seek out) swappable pledges from unexpected sources, and to organise unforeseen transactions beneficial to both parties. Many fair visitors were obviously intrigued by Armstrong’s process and it introduced a lovely, relaxed, less fiscally-intense ambience to the overall event.

The other conspicuous booth with a focussed, very singular impact, was the Sarah Scout Gallery (from Melbourne) with its presentation of a suite of Tony Garifalakis works, photographs of female members of the Royal Family with their visages transformed by dribbly splodges of sprayed-on black paint. Wonderfully evocative as an anarchist gesture, the mutilatory insult (with their eyes and mouths peeking through the oily stains) fiercely mocked genetic purity and aristocratic (with fawning media) privilege. The installation was hugely enhanced by the Scout Gallery’s papering of the booth’s walls with images of a mottled grey concrete floor - boot prints and industrial striations included - a wonderful backdrop for Garifalakis’s extraordinary tiara wearing obliterations.

Like the Sarah Scout Gallery, most booths were rectangular with their long sides parallel to the outer walls, but two or three were with the rectangle turned around: double the depth but with their short ends parallel to the walkways. Hopkinson Mossman had an inspired pairing of the skeletal grid (die-cut) felt hangings of Peter Robinson with the minimalist paintings of Oliver Perkins, while down the other end, Bath St displayed a selection of the whimsical and blotchily sensitive, peanut shaped abstractions by Denys Watkins. These were on the main wall, while on the sides were related works by Mark Braunias, Jessica Pearless and Jon Tootill.

As you repeatedly did the circuit of various lined up galleries, bookshops and magazines, cutting through gaps to the other side when some surprise or personage caught your eye - all the while nodding, bowing, waving and winking to various friends, acquaintances, clients, associates, and intimates, as well as (of course) more formally introducing yourself to new contacts - it soon became clear that the outer periphery of the loop had various items positioned on the route that were a separate project from the stalls. This selection, once discovered, was found to be put together by Simon Rees, Jarrod Rawlins and later Francis McWhannell to examine the place of the Pacific in a global digitally interconnected network. While some elements were commercial and clearly presented by galleries as acquirable objects, others weren’t, and leant towards the dematerialised. These, perhaps in mood or content, had a little more gravitas.

Of the dozen components in Pacific Real Time, five were sculptures, one was a neon text, two were website links, two were video installations, one was a suite of paintings and the last was an artist collective invited to participate.

Near the entrance, Quishile Charan‘s towering obelisks doubled as plywood plinths - for on their tops were placed prayer coconuts - while the sides of the seven ‘minimalist’ columns were coated in yellow turmeric, a symbolic cleanser used to whiten teeth. The plinths represented the seven stages Charan’s family took to reach Fiji from India, before they came to New Zealand.

Melbourne artist Kathy Temin contributed a suite of shorter columns covered in dark fake fur that referenced members of her family who perished in the Nazi death camps in Poland and in the Warsaw ghetto. Partly hidden against the black walls of the fair’s toilet block, they discretely acknowledged the central European contribution to Australasian culture.

Wayne Youle‘s relief sculpture had two clocks set on the wall in two ‘flagged’ territories, separated by two bobbing toy woodpeckers, and two wooden houses: one for Aotearoa and a half one for Samoa. The Samoan clock was going backwards, the New Zealand one was ‘normal’ and the work’s title, Welcome, we have the Wi-Fi, spoke of the dispersed Pacific community and the difficulties of clashing cultural ethos, persisting despite Wi-Fi and Skype.

Fiona Connor‘s simulacra of a Community Notice Board (Silverdale) was amusing because of its apparent references (via encased posters) to the art community, chiefly the now defunct Dog Park Project Space in Christchurch. Looking as though it were ripped up out of the earth, the sign leaned against a partition as if now obsolete, a comment on obsolescence itself and rapidly changing technology.

Given a corridor booth by this show’s curators, the artists collective Terror Internationale have their gallery space above Joy Bong restaurant in Hereford St. They have presented five exhibitions now (including the art fair selection, video programmes and clothing design) and have eighteen members that include fashion designers, an actor, a dj and an architect - who come from a diverse range of backgrounds, not necessarily tertiary art institutions. The presence of this recently emerged artist run initiative (ari) at the fair - in the midst of many much more experienced galleries - encouraged visitors to think about the constantly evolving historical shifts within our national and local art communities, and of course ‘Internationale’ ones too.

Bronwyn Holloway-Smith had a poster for It behooves wired people to know a few things about wires, framed in showbizzy light-bulbs, but the real substance of her project was in her website link that looks at the politics of global communications and placement of undersea cables. This work seemed to be the most crucial contribution to Pacific Real Time, a very informative look (courtesy of Nicole Starosielski) at the routes of various cables and how information is circulated and controlled.

Liyen Chong currently lives in Houston Texas and her contribution was a series of instagrams posted as she moved around the Lyndon B. Johnson Space Centre during the morning of Thursday 26 May, maintaining a live link with her New Zealand audience, and capitalising on the immediacy of her image production (65 photos) and transmission.

Cerith Wyn Evans‘ white neon text, In praise of shadows, seemed to comment on the lack of physical palpability in digital communications, implying that this is a loss - that something worthy is missing - outside of the sign’s own auratic hazy blur. We are left with all these evanescent surfaces…

Memories reinterpreted, community messages replicated, visages on Skype or Instagram, simulacra on poles, undersea conduits only nanoseconds behind real time; all spread out across a watery terrain and as a loop enclosing the clusters of stalls - the pulsing crackling energy of Auckland Art Fair 2016.

This is the second of three articles on the Auckland Art Fair 2016.