The Streets of Old Jerusalem 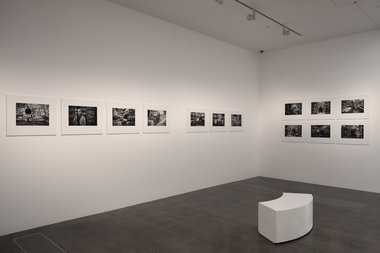 For those of us who have never visited this city, these photographs pack in a lot of information, such as the types of product being sold, the market being pitched to, the ethnic traditions of the shopkeepers, the architectural backgrounds around each stall and materials used.

A suite of 27 photographs that look at some of the personalities who operate as vendors in the four quarters (Muslim, Jewish, Armenian, Christian) within the Old City of Jerusalem, Ilan Wittenberg’s images are characterised by density of detail, spectacular acuity and lots of tonal midrange. Almost everything is in focus, there is very little bright white, and the eye is caressed as it wanders across the print’s surface. Even with the deep perspective of (say) receding shelves, the plethora of detail flattens and accentuates the picture plane.

For those of us who have never visited this city, these photographs pack in a lot of information, such as the types of product being sold, the market being pitched to, the ethnic traditions of the shopkeepers, the architectural backgrounds around each stall and materials used. We see (for example) pistachios, hookahs, oils, prayer beads, gas cylinders, images of saints, plates, busts, incense, brass gongs, bells, tobacco, tea, tunics, smocks, lamps, and plaques - a vast range of easy-to-transport (instantly purchasable) merchandise. Here is a selection of Wittenberg’s images with this link.

It is the fineness of the detail, an intricacy of each particular documented element that fascinates, a compactness that is without graininess or blur, that density providing clarity.

While about three-quarters of the images feature vendors (most indoors, one outside), there are also a few street shots of people out and about, like a boy with a cart, or a nun crossing the street. The titles however are pretty non-descript and it is a shame they don’t include the subjects’ names, so that the cultural mix is made even more immediately apparent and we can get more specific information about their stories.

Somehow there is something missing with this show. These are terrific images that are loaded with information you can extract (if you are familiar with the city), but a few details in the titles - identifying each person and each site - would have made it so much richer for a New Zealand audience. Less touristy and shallow. Less voyeuristic. More contextual.

The detail and technical expertise of this suite of photographs of Old Jerusalem by award-winning photographer Ilan Wittenberg may be ...

The detail and technical expertise of this suite of photographs of Old Jerusalem by award-winning photographer Ilan Wittenberg may be applauded by some, but to me the whole project seems out of time, out of date and...I have to say, insulting. Firstly this Israeli/New Zealand photographer, as John Hurrell notes, does not name his subjects. This is a well-worn, now largely out-of-date and obviously dehumanising technique for 'othering', and exoticising, which was adopted in a number of colonial and ex-colonial countries in work depicting indigenous peoples, as we well know. Where has Wittenberg been?
He describes the portraits as 'proud'. What exactly might this mean? I see little sign of this nebulous quality.
Many of the expressions on the faces of the people he has chosen to portray seem more blank, depressed or expressionless. He himself reports that he was more welcome in the guise of a'Kiwi'in his work on the project. This needs explanation. If he could not produce the work as what he was/is, an Israeli, why not? Viewers would be interested to know - and perhaps, better informed about the problems involved in engaging in such a project.
The current situation on the Old City of Jerusalem - just google it for a few days running - is dire. He gives no adequate political context whatsoever for the complex situation, the violence, the absolutely critical, incredibly complex issue of Jerusalem in relation to Palestinians and to the state of Israel.
What are we presented with? Romanticising National Geographic-type 'documentation' of around 27 persons of varying ages, ethnicities, backgrounds. Looking picturesque in their shops. Did he show and discuss the photographs with these people? He doesn't say.
This exhibition can be seen as a very useful project for the continuing efforts by
some Israelis operating in other countries to convey
the idea of the 'benign face' of Israel. Intentionally or not - maybe the artist is simply naive - this is the effect. Israel after all is a state which in reality is involved in continuing colonialist expansion and the brutal oppression of Palestinians, fewer and fewer of whom are able to live in Jerusalem.