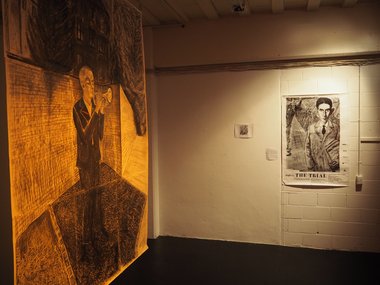 Crewdson has a penchant for exploring different coding and message conveying devices, and their patterns of dispersal. With a profound empathy for the oppressed and victimised, he makes good use of his considerable technical expertise, whether drawing in charcoal or playing bluesy laments on a horn. Paradoxically he tends to avoid the slick, gravitating towards ‘unsophisticated' or ‘primitive' modes of presentation where immediacy of feeling is perhaps less likely to be deflected.

Originally part of the early 80s Wellington improv jazz collective Braille, and associated groups ( The Family Mallet, Motto) - but now returned after a long period of being Sydney based - musician and artist Gerard Crewdson here presents a collection of visual art projects in three rooms of the Audio Foundation. Some are charcoal drawings for stage productions of plays or outdoor solo performances, others are props for Dada or Fluxus-style events, and one or two are new, paperworks made especially for this show. Six works total; here in silence, but with contextual music and extra information available online if you look for it.

In the first, largest room that is dark with spotlights on the drawings, we see Crewdson‘s large charcoal drawing for a poster made for a production of Kafka’s The Trial. There is also a large drawing commemorating a 2009 performance he did in tribute to eight early victims of Nazism in the small city of Brandenburg, where in 1940 a small group of mental patients were gassed in a prison to test the efficiency of the newly developed poison prototype. An onstage recital (and performance) with a cornet can be seen here.

Also on a wall, bathed in red light, is a nine-legged, spiny cardboard starfish/ spider/swastika, a sinister totalitarian symbol that you can spin to hear it rustle, shudder and rattle.

In the two white-walled gallery spaces next to the office there are three installations. One is a knocking code for prisoners who can tap out messages on the walls, each letter being a combination of two short groups of taps. Visitors are invited to work out their names (its sequence of letters) and declare their presence by tapping messages on specified sections of gallery wall, and leaving the paper-leafed (‘morse’) calculations on the remainder.

On the opposite wall are some Percussive Prayer Beads (threaded Fimo balls) made by Crewdson where the six colours (ROYGBP) represent different percussive instruments. There are four sets of these ‘scores’: four large (over 30 beads) and four small (about 6), and a photograph from the original performance with its unusual Hugo Ball-esque costume.

The last gallery has a large suite of delicate paper rubbings cut and shaped into concave disc or hexagonal leaf forms, of varying sizes and colours. Like small oval dishes, or paua shells, they are made from textures cut into lino and rubbed (using crayon over paper), and seem to refer to emissions radiated from stars that have now vanished.

Crewdson has a penchant for exploring different coding and message conveying devices, and their patterns of dispersal - but without any preoccupation with communicative efficacy in terms of raw information. With a profound empathy for the oppressed and victimised, he makes good use of his considerable technical expertise, whether drawing in charcoal and pastel or playing hauntingly bluesy laments on a horn. Paradoxically he tends to avoid the slick, gravitating towards ‘awkward,’ ‘unsophisticated’ or ‘primitive’ modes of presentation where immediacy of feeling and emotional intensity is perhaps less likely to be deflected.