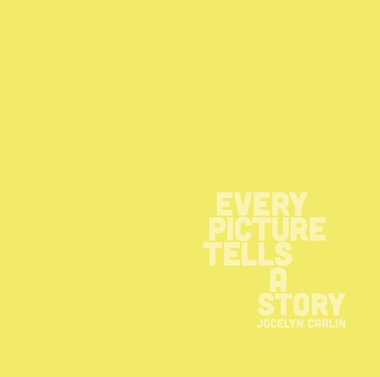 Like Peter Peryer, Carlin's a blogger and, like him too, her texts are an illuminating adjunct to her images. Her new book is a compendium of various projects, the selected images accompanied by excerpts from her blogs which gives an accessible and engaging diaristic flavour to the enterprise. The publication brings into sharper focus her various talents: firstly as a portraitist; secondly as a documentary photographer; thirdly as a photographer with a truly active eye.

Jocelyn Carlin
Every Picture Tells a Story
A book of photographs

This thing we call art has a long and rich history. Photography’s a relative newcomer - still something of a wayward adolescent - and there is a continuing discussion about which parts of the medium qualify for the art label. An early photographic historian, Beaumount Newhall, said around 1960 that in the writing arena we know the difference between a poem and a shopping list but in terms of photography we haven’t yet sorted it out (1).

Of course, Newhall’s observation was predicated on a hierarchy of values that, increasingly, fails to maintain credibility. It would surprise no one now were there to be discussions about the poetry of shopping lists. But the art world is essentially a conservative animal - despite all the hipness it constantly but covertly claims - and naturally resists change to existing perceptions. The art world’s gate-keepers assume the right, and perhaps even duty, to decide what’s what, and there are many careerist artists prepared to suck up to them and the operators who offer in sound-bite form somewhat cynical advice as to the process (2). Photography no longer needs to knock on the front door of the art mansion pleading admission. While the cultural butlers wait in the hall ready to deliver their judgements, the medium has quietly built a commodious lean-to out the back with its own door and has fully taken up residence. The butlers need to leg it down to Work & Income to seek a real job.

What characterises an adolescent - often maddeningly - is the range of possibilities their potential encompasses. And so it is with the photographic medium. Just look at developments over the past three to four decades at all levels. More has happened over that time than between 1839 and 1970, and with no end in sight. Photography’s a stroppy teenager and whatever anyone thinks about what its place is, be sure that it’s parenting the next generation. What’s important to keep in mind now, though, is that these developments are lead by the photographers, not the gate-keepers. And what’s seldom realised by the mandarins is that this relatively new medium of human expression is gradually reshaping ideas of what might constitute art.

Despite the range and pace of recent developments there has always been a particular relationship between the photographic image and the book. The first compilations of images were not made by curators for exhibitions but for books by photographers such as Fox Talbot and Anna Atkins. Of course, the relatively small sizes possible for photographic imagery then made photographs ideal for publishing in book form, and the carte de visite’s advent in 1854 and the subsequent invention of the photograph album made such books the staple of virtually every household - until very recently when technological developments allowed the same function to be performed electronically.

Similar technological developments have lead to the rapid expansion of photographers publishing their own limited-edition books: Peter Black, Jane Zusters, Mary Macpherson and Tim J Veling being among them (3). It’s a way for photographers to have their work presented and seen in the way they feel is appropriate, not diluted and reshaped by publishers more conscious of marketing and commercial considerations. And it’s also a way for the medium to re-engage with its history as it relates to the book and the album.

The latest appearance in this genre is Jocelyn Carlin’s very professionally-produced Every Picture Tells a Story. Carlin’s never had a high profile during her practice stretching across four decades, but she’s travelled many kilometres in the course of it and has produced a prodigious amount of work, all of it fired by curiosity and a belief in the power of the medium. One of her intriguing strengths is her embrace of the medium’s spectrum, from strictly commercial jobs to so-called art photography - which is also the main reason why she’s a bit under the radar. The butler would’ve considered her too ‘common’ for admission. She might be consoled that on the same grounds George Orwell wouldn’t have got in either.

Like Peter Peryer, Carlin’s a blogger and, like him too, her texts are an illuminating adjunct to her images. Her new book is a compendium of various projects, the selected images accompanied by excerpts from her blogs which gives an accessible and engaging diaristic flavour to the enterprise. The publication brings into sharper focus her various talents. Firstly as a portraitist: one of fellow photographers Richard Collins, Marti Friedlander and Gary Baigent (p.17) is a formal masterpiece Arnold Newman could be proud of. Others of female twins in her family (p.59) and musicians Mark Williams (p.59), Laurie Anderson (p.73) and Elvis Costello (p.149) are compelling instances of the portrait. Secondly as a documentary photographer: the “go-to” photographer for Pacific imagery has been assumed to be the late Glenn Jowitt, but Carlin’s more geographically wide-ranging work is of at least equal stature, and in time may be judged to have more to offer. Thirdly as a photographer with a truly active eye: whether in Barcelona on 9/11 (p.189) or part of a family Christmas (pp 37 & 39) Carlin’s crisp and very observant approach results in imagery of formal strength and personal engagement.

Her awareness of the world has brought forth some classics, such as one from her ‘Land’ Aotearoa series depicting a row of four piu piu strung up on a poled domestic clothesline at Waitomo near Te Kuiti (p.173), but her awareness has extended to new possibilities for the medium, and her ‘Te Be: Portraits’ series (pp 217, 219 & 221) is a good example, their original inspiration being Len Lye’s photograms.

This book too is an example of new possibilities; there’s been nothing quite like it. Its complex structure is nonetheless very approachable, and repeated readings bring many rewards. An unaffected, wide-ranging and direct publication, it’s a memorable and significant achievement. Every Picture Tells a Story is itself a story of Carlin’s life and times, and also an illuminating record of the way photography has fitted into both. The segue is of dovetail quality and this book is a fine tribute to a life well-lived and times well-seen.

(1) Recent examples are offered in Andrew Paul Wood’s piece on this site about Te Papa’s new photography book, posted 10/12/15. “The selection is generous and famous artworks and documentary images rub shoulders with pictures from advertising, studio portraits, snapshots and cartes de visite.” And “Photography as art in the purest sense doesn’t kick off properly until Chapter 5 …”
(2) See 3/12/15 posting on blogsite Over the net.
(3) There is a new organisation to raise awareness of such books - with an associated annual award - through a book fair showcasing newly-published books by photographers and independent publishers. The inaugural event will take place at Massey University, Wellington, on 11/12 March 2016.