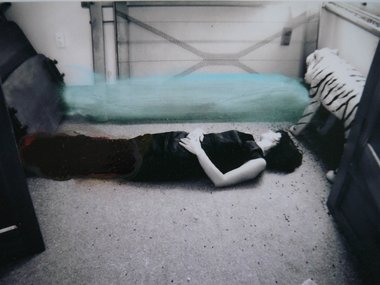 Perhaps most intriguing of all is the least conspicuous work in the show, Fly Catcher, a one-off 440 x 485 mm black and white photographic inkjet print of the artist lying on the floor in an ambiguous room. A blob of dark red-black obscures her legs as if to consume her. Another blob in muddy pale blue hovers above her, echoing her prone form like an ectoplasmic aura in a Victorian spirit photograph. It tantalises us with the possibility it is some kind of Rosetta Stone that can unlock the mysteries of the other paintings.

Yet was there a sort of indefinite, half-attained, unimaginable sublimity about it that fairly froze you to it, till you involuntarily took an oath with yourself to find out what that marvellous painting meant. Ever and anon a bright, but, alas, deceptive idea would dart you through. - Herman Melville, Moby Dick, 1851

Marie Le Lievre’s Trappings at the Jonathan Smart Gallery announces with a solo show the full emergence of the artist, the fulfilment of her perfectionism and attention to process. The result is a dense, rich and entirely coherent experience splitting into three distinct bodies of related work. The title is a play on “trappings” as outward signifiers of a particular situation, and the act of capture, trapping or being trapped.

The Interior Motifs series of works are perhaps the most obviously continuous with Le Lievre’s earlier “handbag” inspired works, but the opaque darkness of the fields of concealing medium has lifted to reveal the intensity of colour we had previously only seen in a glass darkly, or flickering like little flames around the edges of dark clouds. Biomorphic blobs of vibrant colour are wired into an elaborate circuitry of perky, jittery drawn lines taken for a walk, but perhaps less Kandinsky than Klee, and also reminiscent of Theo Schoon’s paintings inspired by mental patient Rolfe Hattaway. The elaborate drizzles and bleeds of the oils are still there. These are quick, caffeinated works pulsating with nervous, even paranoid energy in stark contrast to the subdued nature of the rest of the work.

The second body of work is characterised by the Marked paintings. Marked (Cerulean) and Marked (Violet) are High Modernist territory with their introspective, slightly melancholic cool colour fields. There is an ironic redeployment of the bag handles of the Baggage works. It almost seems as if the dark, opaque veils of past work have returned, except that the artist gouges though the surface shell of paint, violently cutting to reveal the more delicate colour beneath. She does this in a precisely controlled way that doesn’t penetrate the canvas, but quite a different effect to sgraffito into wet paint. Like an act of self-mutilation it intimates a desire for control and autonomy in a frightening, chaotic and arbitrary universe. The scratches have a vaguely Cy Twombly feeling, an ascemic shorthand that brings to mind A. R. D. Fairburn’s nasty quip comparing McCahon’s style to graffiti on the walls of a celestial toilet, but turned on its head to become an oracular inscription.

The most prominent works in the show, the two that give it its name, are Trappings (Lamp Black) and She (Traps). They dominate an entire wall and, though separate works, are aligned in such a way as to make them mutually symbiotic. The smaller work, She (Traps), is startlingly figurative among all this pure abstraction. A direct echo of the powerful psychological drawings of Le Lievre’s On / Out exhibition, and showing the artist’s mastery of the figurative as well as the abstract, it depicts a mysterious, even ominous female figure, her face obscured either by a veil (shades of the mysterious veiled statue of Isis at Saïs in Egypt) or hair (unsettling like the ghost girl in the Ring movies). Dribbles of paint around her head form something like a crown of thorns. She is connected by a swoosh of paint to the larger Trappings (Lamp Black) which is more typically abstract and a tour de force of the artist’s manipulation of oil effects and surfaces, though the viewer could be forgiven as seeing it as a giant demonic bat. The relationship between the two works is ambiguous; is the woman emerging Venus-like from some amniotic Id, connected by that umbilical of paint, or does the larger work emerge from her head like a thought bubble in a comic book?

Perhaps most intriguing of all is the least conspicuous work in the show, Fly Catcher, a one-off 440 x 485 mm black and white photographic inkjet print of the artist lying on the floor in an ambiguous room. A blob of dark red-black obscures her legs as if to consume her. Another blob in muddy pale blue hovers above her, echoing her prone form like an ectoplasmic aura in a Victorian spirit photograph. It tantalises us with the possibility it is some kind of Rosetta Stone that can unlock the mysteries of the other paintings. Her ambiguously classical attire and turned-away face hint at autobiographical connections with She (Traps) and the On / Out works, but as to what exactly, is for the artist to know and the viewer to speculate.